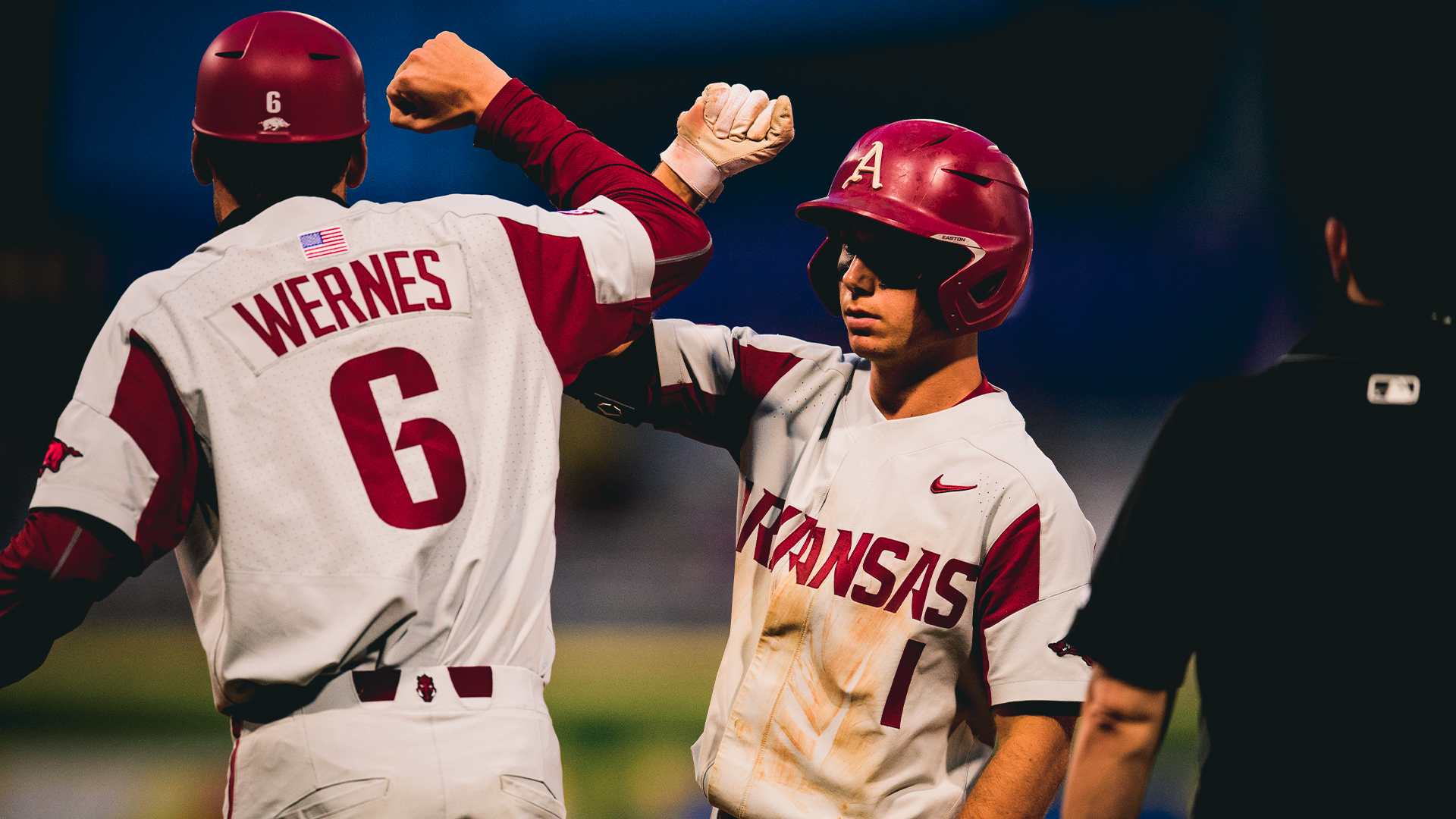 BATON ROUGE, La. – The Hogs have won a series in Baton Rouge for the first time since 2004.

No. 1 Arkansas split Saturday’s doubleheader at LSU, claiming a 17-10 win in game one of the twin bill to secure a seventh consecutive SEC series win. The mark is a new program record, topping the previous best of six in a row during the 2004 and 2015 campaigns.

The Razorbacks, who dropped the nightcap, 5-4, are now 34-8 overall and 15-6 in SEC play following Saturday’s action at Alex Box Stadium. Dave Van Horn’s squad maintains a 1.0-game lead ahead of second-place Mississippi State.

Arkansas gets back to work next weekend in the friendly confines of Baum-Walker Stadium. The Hogs host Georgia for a three-game conference series, which is set to begin at 6:30 p.m. Friday, May 7, on SEC Network+.

Game One
Christian Franklin and Robert Moore each drove in a team-high four runs in the opening contest of the doubleheader, powering Arkansas to a 17-10 win.

Six Hogs recorded multiple base knocks in the triumph, including three-hit efforts by Franklin, Moore and Cayden Wallace. Moore was a double shy of the cycle, clearing the bases with a two-run triple in the first inning before swatting a two-run homer, his 11th of the year, in the fifth and singling in the sixth.

Arkansas struck early and often, jumping out to a 5-0 lead in the very first inning. The Razorbacks put up seven runs in the fifth and four more in the sixth before tacking on a final run in the eighth, posting double-digit runs for the 13th time this season and cruising to a seven-run win.

Game Two
The Razorbacks nearly pulled off yet another come-from-behind victory in the nightcap. Arkansas fell behind early as LSU scored three in the first and tacked on two more runs over the next two innings, opening a 5-0 advantage entering the fourth.

The Hogs’ comeback bid started there. Franklin’s fifth RBI of the day came via a sacrifice fly to center in the top of the frame, bringing home Brady Slavens to cut the deficit to four.

Caden Monke and Kevin Kopps, meanwhile, were dominant in relief, silencing LSU for the final 5.2 innings of the game. Their efforts allowed the Razorbacks to mount a rally in the top of the ninth that nearly proved decisive.

Arkansas loaded the bases with nobody out before Moore collected his fifth RBI of the day with a sac fly to center. Jalen Battles stepped up to the plate two batters later and ripped a single up the middle with two outs, scoring two and making it a one-run ballgame.

Battles, who represented the game-tying run, would get left stranded at first, however, as the Hogs could not complete the comeback and fell, 5-4.