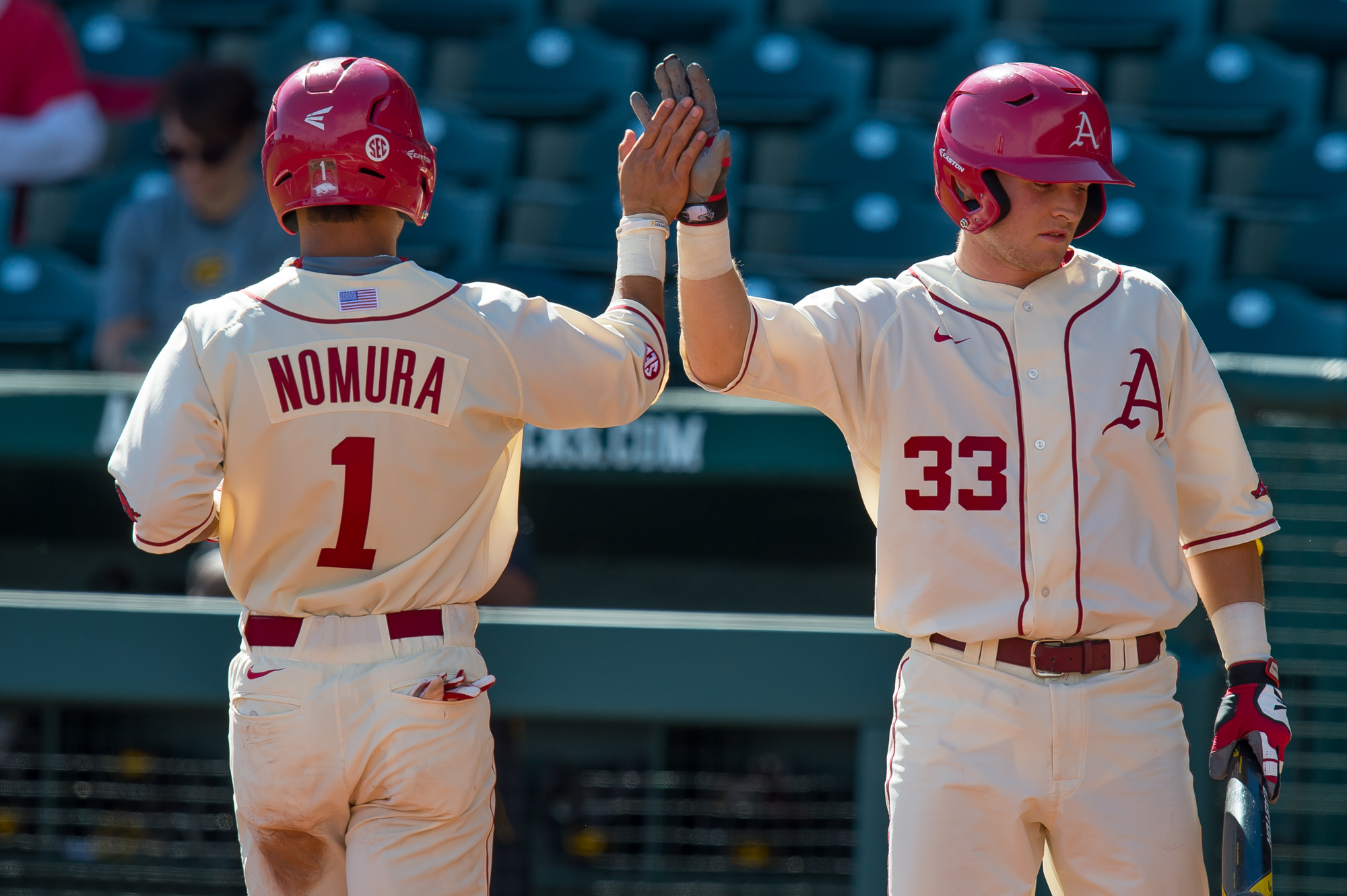 FAYETTEVILLE, Ark. – It wasn’t the hits that got Arkansas the win Wednesday afternoon against Grambling State, but the Hogs found a way to score the winning run in the bottom of the eighth after some heads up base running by pinch runner Darien Simms. Arkansas defeated Grambling State, 3-2, at Baum Stadium to complete a two-game series sweep over the Tigers and take a five-game winning streak into SEC play this weekend.

The win was the Razorbacks’ eighth this year when holding opponents to two runs or less and was its 15th overall win on the season. It’s also the best record Arkansas has had heading into conference play since 2012.

Arkansas (15-3), which only managed four hits in the game, struggled in the middle innings to put anybody in scoring position. The Hogs finally took advantage of some key Grambling State (4-11) mistakes in the eighth that started with a Cullen Gassaway walk.

After Simms came on to pinch run for Gassaway, the next batter, Luke Bonfield, worked deep into the count and Simms was able to steal second base, forcing a bad throw from the catcher. As the ball rolled into centerfield, Simms popped up and raced to third, putting the go-ahead run 90 feet away with still only one out.

On the next pitch, Grambling State pitcher, Tanner Raiburn, skyed one over the catchers head for ball four and allowed Simms to score from third, giving the Razorbacks the 3-2 lead.

Freshman lefty, Weston Rogers, got the start Wednesday and went four good innings, but gave up a two-run home run in the fourth inning, which tied the game at 2-2. Rogers finished giving up only two earned runs on three hits, while striking out two and walking none.

Out of the bullpen, Blaine Knight, Josh Alberius and Willey all combined for the final five innings, allowing just three hits and earning six strikeouts. Alberius, who was making his sixth appearance this season, retired six-straight batters on just 25 pitches to win his first game of the season.

Right-handed pitcher Doug Willey shut the door in the ninth, earning his first save of the year in the final frame with a 1-2-3 inning including striking out the final two batters. Willey has been one of Arkansas’ go-to guys out of the bullpen this season as he has yet to give up a run in nine appearances.

The Hogs’ only scores before the eighth inning run by Simms came back in the second and third innings. In the second, senior Michael Bernal delivered the one-out RBI single to left field, which scored Rick Nomura from second. Then, in the third, sophomore Carson Shaddy led off with his third double of the year, before being brought around via the ground out and then the sacrifice fly from Cullen Gassaway.

As a team, Arkansas had seven walks in the game, but struggled to move guys into scoring position multiple times, going 1-for-15 (.067) with runners on base. The seven walks still ties for the fifth-highest total in a game this season.

Arkansas opens SEC play this weekend as it travels to Columbia, S.C., to face No. 12 South Carolina for a three-game series. Friday’s game one is set for a 6:30 p.m. CT first pitch, followed by a 3 p.m. first pitch on Saturday for game two. Sunday’s series finale will be at 12:30 p.m.

“They have a lot of players back that were on the team last year. I think we’re anxious to get down there, and just kind of get it underway. It’ll be quite a challenge for our team.” – Dave Van Horn on South Carolina

“We won 14-4 yesterday, I knew it was going to be like this today. It’s just the way the game works a lot of the time. We couldn’t get a big hit early, and we had a guy on the ropes.” – Dave Van Horn on today’s game

“We’ve won some games of late. We’ve won 5 in a row now after having not a real good week after we got back from Houston. Gonzaga, they just kind of took it to us from the 7th inning on, and I think we grew up a little bit on that and figured a few things out. It’s good to have the winning feeling going in, a little confidence going into conference play.” – Dave Van Horn on the team’s recent performance and moving forward.” Dave Van Horn on taking a five-game winning streak into SEC play

“I was really impressed with that team (Grambling State). They all took really good swings. We knew it was going to be a battle. Those kids are all really powerful and all can hit home runs at any time. We knew it wasn’t going to be easy.” – Carson Shaddy on grinding out the win

“To hold them with two runs was huge. That team was aggressive. We saw it since the beginning of the game yesterday, and the only way to get them out was to keep the ball down in the zone and throw strikes and that’s what I did. Coach Jorn preaches that to me every day and I feel like if I can do that, then no matter who were facing, we can get the win.” – Josh Alberius on pitching against Grambling State