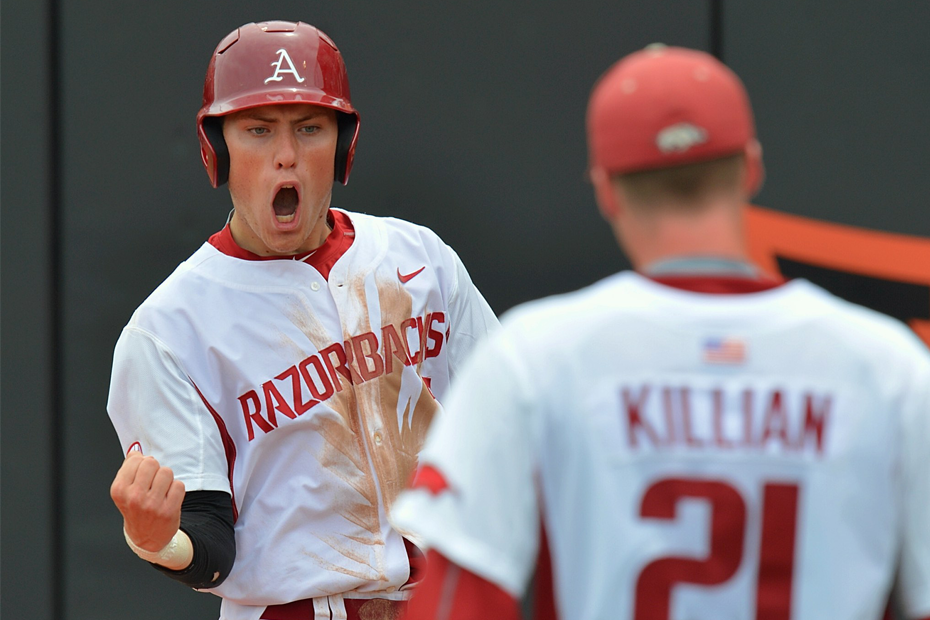 No. 2 Arkansas advances to the winner’s bracket and will play on Saturday at 6 p.m. against No. 1 seed Oklahoma State. Television will be determined after matchups are set later tonight.

Trailing 3-2 in the sixth, Arkansas busted through with a four-run inning to take a lead they would not relinquish.

Joe Serrano and Bobby Wernes opened the sixth with back-to-back singles to set the stage for National Player of the Year Andrew Benintendi, who showed once again why he is the best player in the country. The sophomore smoked a two-run double, giving the Razorbacks their first lead of the game.

Tyler Spoon and Rick Nomura also drove in runs in the sixth. Clark Eagan hit a two-run triple in the eighth to extend the Razorback lead.

Jackson Lowery and Zach Jackson were impressive in relief, combining for three scoreless innings. Lowery retired the first six hitters he faced and picked up his seventh win of the season.

Arkansas has now won five of its past seven NCAA Regional openers. The Stillwater Regional marks the 14th consecutive season the Razorbacks have played in the NCAA Tournament.

– The Razorbacks are in the midst of their 28th NCAA Regional in program history, including the 14th consecutive.
– Arkansas improves to 67-58 all-time in the NCAA Tournament and 49-39 in NCAA Regional action.
– The Razorbacks are 10-5 in NCAA Regional openers in the last 15 years.
– Arkansas is a win away from advancing to its sixth straight NCAA Regional final.
– The Razorbacks have won 11 of its past 15 games away from home
– Jackson Lowery earned his team-leading seventh victory of the season.
– Andrew Benintendi recorded his eighth three-hit performance of the year and 28th-multi hit game.
– Benintendi notched his 18th multi-RBI game of the season.
– Michael Bernal extended his hitting streak to a career-long 11 games.
– Tyler Spoon hit his team-leading 19th double and 25th extra-base hit
– Spoon notched his 18th multi-hit game
– Rick Nomura has multiple hits in 15 games
– The Razorbacks have totaled 10-plus hits in 27 games this season.
– The Arkansas pitching staff tallied double-figure strikeouts for the 17th time.
– Arkansas is now 66-35 all-time against Oral Roberts.