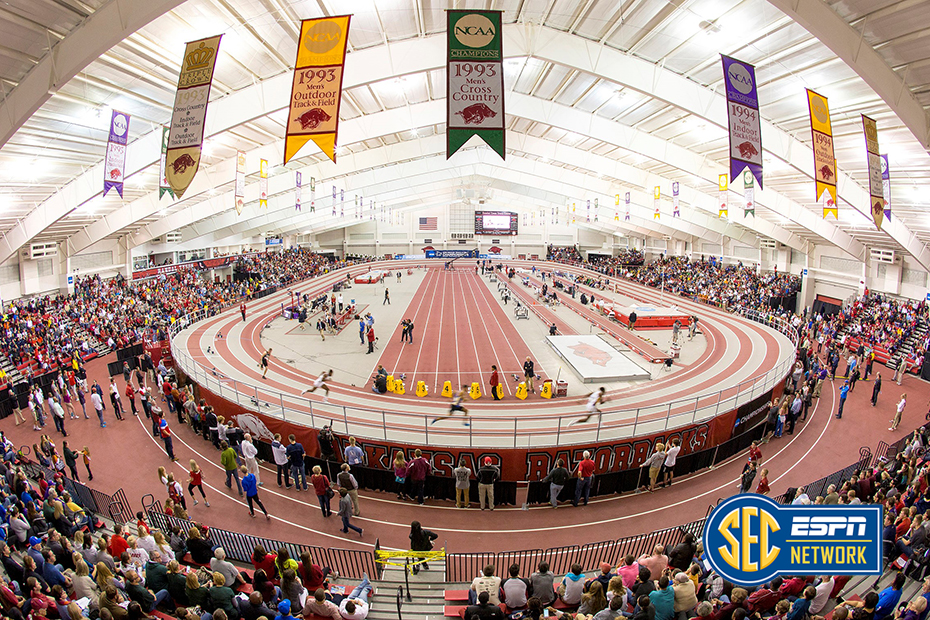 FAYETTEVILLE, Ark. – The University of Arkansas will host the first televised regular season track and field meet this weekend with the Razorback Invitational on Jan. 29-30. Representatives from each of the Power Five conferences will compete in the team-scored event at the Randal Tyson Track Center.

“We’re thrilled that the SEC Network has provided us with the opportunity to televise this meet in a prime time slot on Saturday,” said head men’s track and field coach Chris Bucknam. “It’s a first for regular season track meets and we look forward to presenting a top quality product in hopes of future opportunities for televised events.”

The Razorback Invitational will feature competition between 12 top Division-I teams including seven ranked men’s programs and six ranked women’s programs. The Southeastern Conference will have the most teams at the meet with No. 11/1 Arkansas, No. 1/6 Florida, No. 7/2 Georgia, No. 6/18 LSU and No. 3/20 Texas A&M. Other nationally ranked teams competing include: No. 5/5 Oregon and No. 16 Oklahoma State (men).

“We’re obviously excited about the opportunity to showcase our facilities and put on a great meet that will feature the best of the best from around the country,” said head women’s track and field coach Lance Harter. “I believe the SEC Network will be impressed with the efficiency of our meet officials and the excitement the competition will generate in our fans.”

Arkansas will host another televised meet later this season when the 2016 SEC Indoor Track and Field Championships comes to the ‘Track Capital of the World’ on Feb. 26-27.

The two-day event will feature several national contenders from the 2015 season. All-session ticket prices are $35 for reserved seating and $25 for adult general admission. Youth and general admission student tickets are available for $15.