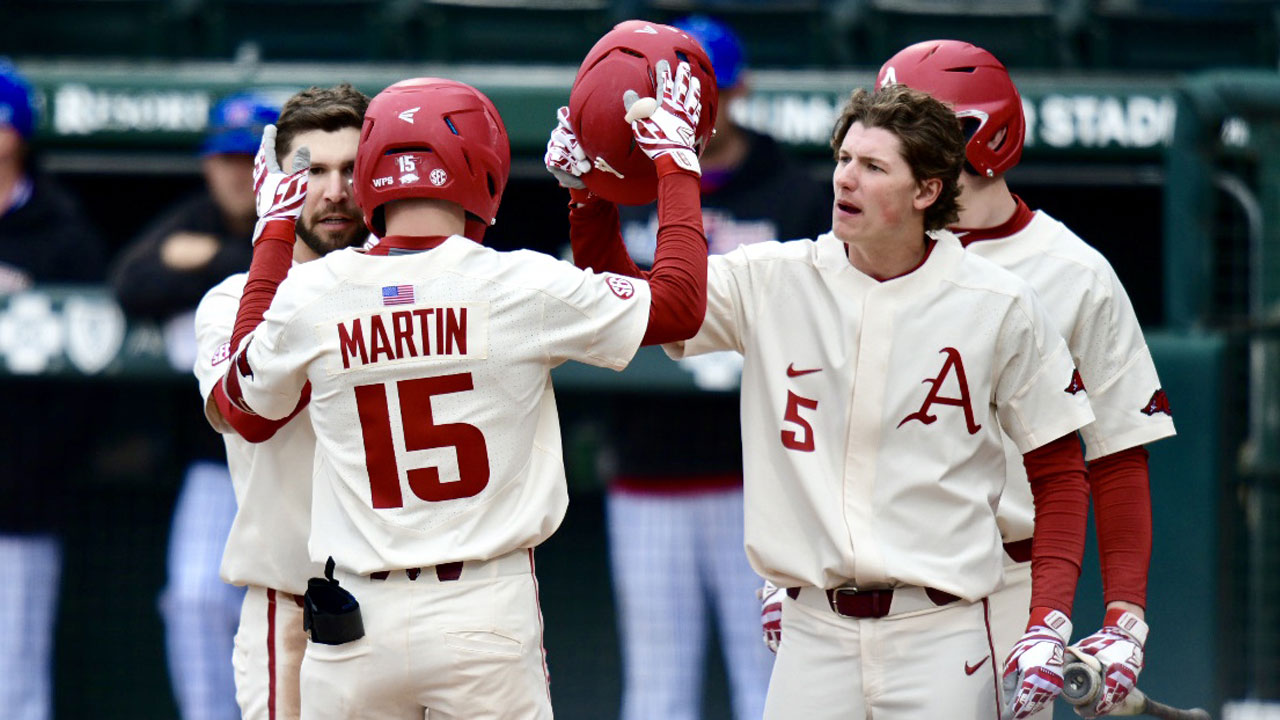 FAYETTEVILLE, Ark. – The 10th-ranked Arkansas baseball team enters the final week of its 14-game homestand this week and will play two midweek games against Western Illinois starting on Tuesday at Baum-Walker Stadium.

Arkansas (12-2) hopes to continue its strong play at home after a 3-1 stretch last week with a midweek win over Charlotte and a series win over Louisiana Tech. Including the victory over the Bulldogs, Arkansas has won 14-consecutive home series dating back to 2017 and is 10-1 in games played at Baum-Walker Stadium this year.

Freshman Patrick Wicklander will take the mound for the second-straight week and will look to build on his performance last week against Memphis that included a season-high five innings pitched and eight strikeouts. The San Jose, California native has struck out four or more in three appearances this year and has only given up four hits in his last nine innings pitched.

Western Illinois (4-8) comes in off a series win over Saint Louis. Junior pitcher Javin Drake was named the Summit League Co-Pitcher of the Week after going eight innings in a 3-0 win over the Billikens and striking out 10. Head coach Ryan Brownlee is in his seventh season with the Leathernecks and finished second in the Summit League in 2018.

Follow Live
Both games this week will be available on SEC Network+ via the Watch ESPN app and WatchESPN.com. Brett Dolan (PxP) and Troy Eklund (Analyst) will call the action. Phil Elson (PxP) and Bubba Carpenter (Analyst) will have the radio call on the Razorback Sports Network.

Fans can listen to the radio call via the Razorback Gameday app and locally on KQSM 92.1 FM. Pregame coverage begins 30 minutes prior to first pitch. There will also be a live radio link available on ArkansasRazorbacks.com.

>> This will be the first time the Razorbacks and Leathernecks have faced off since a three-game series in 2016, a series that Arkansas swept.

>> The Razorbacks suffered their first loss at home last week against Louisiana Tech, but bounced back to take the series on Sunday with an 11-0 shutout. It’s the 14th-consecutive home series win dating back to 2017.

>> The Arkansas pitching staff was strong, once again, walking only six batters combined in the three-game series with the Bulldogs. The Hogs have walked three or less in a game 11 times this year.

>> Casey Martin’s bat has come alive in the last week as he’s notched six RBIs and three hits in his last two games, including two home runs. He’s second on the team with 14 RBIs.

>> Freshman right-hander Elijah Trest made his collegiate debut on Sunday against the Bulldogs and struck out the side in his one inning. He’s the fourth Razorback freshman pitcher to strike out the side in their first collegiate inning this year (Monke, Wicklander, Taylor).

>> Right-hander Cody Scroggins pitched the best game of his career on Sunday, going a career-long six innings and striking out a career-high 11 batters on 88 pitchers.

>> Freshman Patrick Wicklander will be making his second start in as many weeks on Tuesday against Western Illinois. Wicklander threw five innings against Charlotte last week and struck out a season-high eight. Over his last nine innings, he’s struck out 15 and only allowed two runs.

Up Next
Arkansas completes the long homestand with its SEC-opening series against Missouri starting on Friday and running through Sunday this weekend at Baum-Walker Stadium. Friday’s game time is set for 6:30 p.m., Saturday’s will be at 2 p.m., and Sunday’s finale will be at 1:30 p.m.