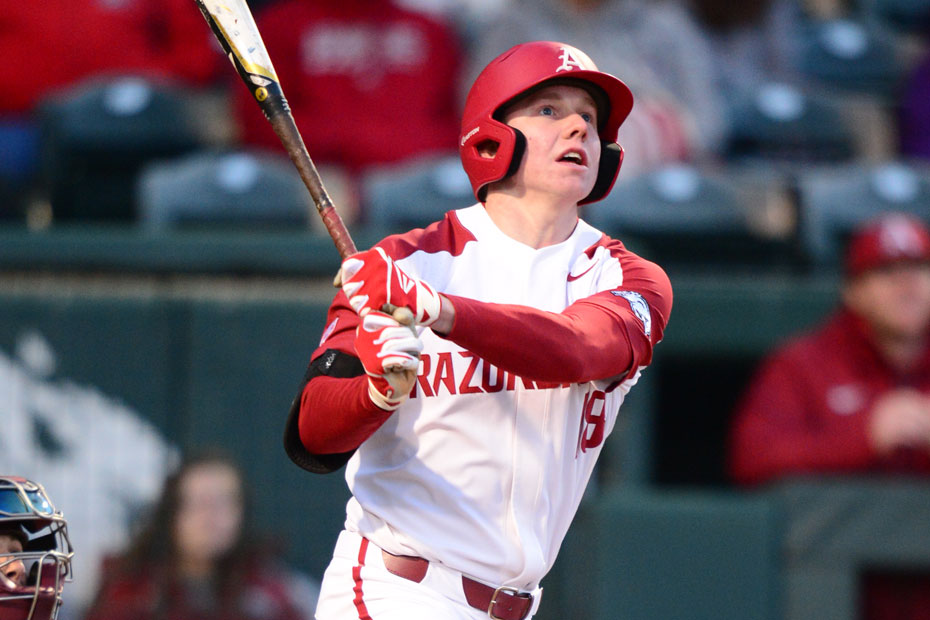 Arkansas Wins In 10 Innings Against ULM

FAYETTEVILLE, Ark. – It took some extra swings Tuesday night, but the fifth-ranked Razorback baseball team pulled out a 10-9 win over ULM in 10 innings at Baum Stadium, its 20th win of the season.

The Hogs got some help in the 10th as Casey Martin scored the winning run on a bases-loaded error by ULM shortstop Joey Jordan. Arkansas only needed two hits in the 10th, but one was a key RBI single from freshman Heston Kjerstad to tie the game. Kjerstad finished the game 3-for-6 with one RBI to extend his hitting streak to a team-best 13 games.

After the Warhawks (15-13, 4-5 Sun Belt) tied the game with a four-run ninth inning, making it 8-8, they took the lead in the top of the 10th by taking advantage of a leadoff walk followed by a sacrifice bunt, an infield single, and then a squeeze bunt by pinch hitter Brendan Jordan. The bunt was placed perfectly in between the pitcher and the third base line to allow the run to score from third.

Arkansas (20-9, 5-4 SEC) roared right back with a two-run bottom of the 10th. Eric Cole led off the frame with an infield single deep in the hole at short, his first hit of the night. The next batter, Casey Martin, grounded a ball back to ULM pitcher, Keegan Curtis. As Curtis threw to second for the potential double play, his second baseman, Brian Barefoot, caught the ball with his foot off the bag. The umpire called Cole safe and Martin was safe at first as well.

The close play shifted the momentum in favor of the Razorbacks as they went on to get an RBI single from Heston Kjerstad, tying it at 9-9. Two batters later, after Dominic Fletcher was hit by a pitch to load the bases, Jordan McFarland grounded to short, but the shortstop threw the ball over the catcher’s head as he tried to get the force out at home, allowing Martin to score the winning run.

Arkansas is now 4-5 this season in one-run games with all four victories coming against non-conference opponents. The win is also head coach Dave Van Horn’s 1,200th victory as a head coach across all divisions. This season is Van Horn’s 24th season as a Division I head coach. He spent six seasons prior as the head coach at Texarkana Community College and Division II’s Central Missouri State.

The Hitting
Along with Kjerstad, Evan Lee and Carson Shaddy both turned in multi-hit games. Lee, who was the leadoff batter as the designated hitter on Tuesday, hit his second homer of the season in the bottom of the sixth inning, to give Arkansas its first lead of the game at 6-4. Lee finished with a team-high three RBIs in the game, which was also a season high and tied his career high.

Shaddy came away with a 2-for-3 performance at the plate, his third multi-hit game in his last five appearances. The redshirt senior has been a tough out over the last three weeks, hitting .450 (18-for-40) over an 11-game stretch with 13 RBIs and just nine strikeouts.

The Pitching
Freshman Jackson Rutledge earned his first start of his young collegiate career Tuesday night and gave up three earned runs over three innings. Juniors Jake Reindl and Barrett Loseke shut down the ULM offense from the fourth through the eighth innings, allowing no runs on just three hits, combined, and eight strikeouts.

Reindl was in line for the victory before ULM scored four in the top of the ninth to send it to extras. Lee, in true two-way player fashion, came in to get the final two outs in the top of the 10th to keep it tied, allowing him to earn his second victory of the year.

Up Next
The Razorbacks and Warhawks are back on the field on Wednesday to close out their two-game series starting at 3 p.m. at Baum Stadium. The game will be televised online on SEC Network+.