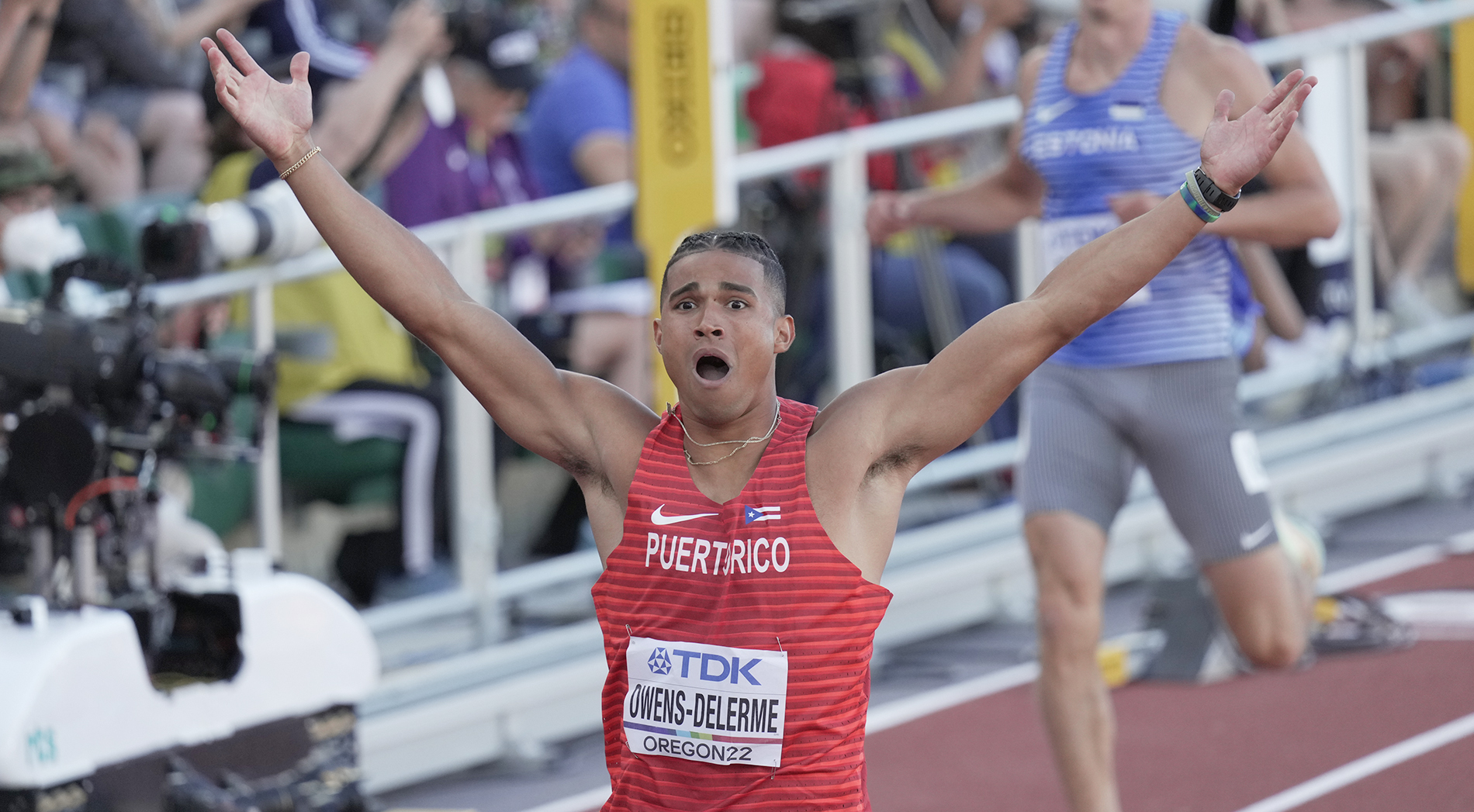 EUGENE – The first day leader in the decathlon at the World Athletics Championships is a familiar name to Razorback fans. Ayden Owens-Delerme, representing Puerto Rico, leads with a career best score of 4,606 points.

In the fifth event on day one, a world-class 400m time of 45.07 seconds, scoring 1,056 points, propelled Owens-Delerme into the lead. Currently, Canada’s Pierce LaPage is runner-up at 4,485 points while American Zachery Ziemek is third with 4,469 points.

“I wasn’t aware that I was in the lead,” stated Owens-Delerme. “It doesn’t change anything about my approach for tomorrow. I’ll come out, represent, and put on a show. I’m ready to go to battle.”

The time by Owen-Delerme just missed the 45.00 world and championship decathlon best set by Ashton Eaton in 2015. It improved Owen-Delerme’s previous best of 46.10 set during the NCAA Championships, also at Hayward Field, in June.

“He knew and we knew he was ready for something special in the 400m,” stated Arkansas assistant coach Travis Geopfert. “It was a matter of executing a race. To go out there and execute so well it just shows the type of elite athlete he truly is.”

Owens-Delerme broke the Puerto Rican national record in the 400m, bettering the previous mark of 45.60 set by Hector Carrasquillo in 2010 at the Ibero-American Championships in Spain.

The 45.07 by Owens-Delerme would have placed sixth in the 400m final held at these World Championships.

“I came here to execute, represent Puerto Rico, represent the Owens and Delermes,” said Owens-Delerme, whose previous day one best score was 4,490 from the 2022 NCAA Championships. “I did that to be best of my ability. I listened to my coach, Travis Geopfert, he’s the best coach in the world.

“We’re not done yet. This is unfinished business as we say. This is a decathlon, it’s a test of mind, not the body. So, we’ve got more to do.”

Damian Warner of Canada, the Tokyo Olympics gold medalist, held the lead after the high jump with 3,696 points. However, racing in the same 400m heat as Owens-Delerme, Warner pulled up with a cramp on the backstretch and did not finish.

The rest of the top five scores after the first day includes American Kyle Garland (4,413) and Ashley Moloney of Australia (4,378) while world record holder Kevin Mayer of France (4,372) is in sixth place.

Owens-Delerme opened the decathlon with a 10.52 in the 100m for 970 points, fourth best among the field of 23. Leading the field with a time of 10.27 for 1,027 points was Tokyo Olympic gold medalist Damian Warner of Canada.

“I’m just really proud of him and how he kept his composure throughout the day,” said Geopfert. “The 100m wasn’t what he wanted, but he came back and did a great job in the long jump. We had a non-measurement in the shot put and he kept his composure until that was corrected. Then he had an outdoor best in the high jump.”

In the 100m hurdles, Razorback Yoveinny Mota missed advancing to the semifinal by the narrowest of margins. Mota finished sixth in the sixth and final prelim heat with a time of 13.12.

A total of five hurdlers had the same time of 13.12, with three advancing and two not qualifying for the semifinal.

Switzerland’s Ditaji Kambundji finished fifth in the third heat with a 13.113, advancing to the final by 0.001 over Mota. The other hurdler not advancing was Liberia’s Ebony Morrison with a 13.119.

British hurdler Cindy Sember, who trains in Fayetteville, posted the sixth best time in the opening round with a 12.67 that placed her second behind world record holder Keni Harrison’s 12.60 in the same heat with Mota.

“I felt I ran quite well,” Sember noted. “It was a little bit rusty but I feel competitive and I want to be ready for the final.

“First of all, the plan is to make it through each round and make it to the final. I really hope to be there, it will be special.”