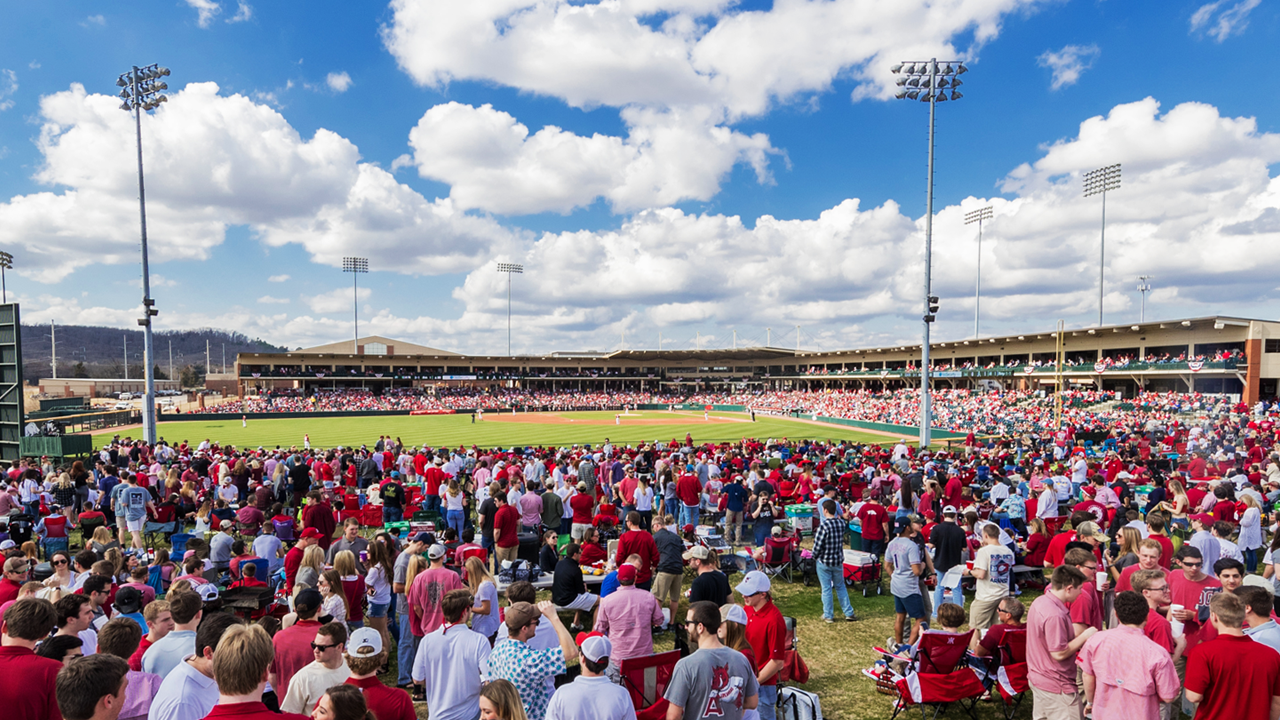 FAYETTEVILLE, Ark. – In an effort to keep Baum-Walker Stadium one of the premier venues in America, the University of Arkansas Department of Athletics will implement several enhancements for the 2020 baseball season.

For the 2019 season, a new comprehensive, stadium-wide Wi-Fi system was installed at Baum-Walker Stadium. The increased connectivity provided fans the ability to browse the web and share on social media easier than ever. To access the free Wi-Fi, fans will simply need to log on to the stadium’s network #RazorbackWiFi, complete a short registration and then they will be ready to go.

Based on the successful expansion of alcohol sales into the general seating areas of Donald W. Reynolds Razorback Stadium and Bud Walton Arena for Razorback football and basketball, fans will also be able to purchase beer and wine in public areas of Baum-Walker Stadium this season. Beginning with Opening Day on February 14, beer and wine will be available for purchase for fans attending the ballgame. The program will now be expanded to create availability for the purchase of beer and wine to fans 21 years or older within designated public areas in and around the stadium.

Consistent with SEC guidelines passed in May 2019, alcoholic beverages will be sold and dispensed at designated stationary point of sale locations on the concourse and not by vendors in the seating area. Identification checks will be required of every person at the point of each sale and alcohol will be dispensed into cups. A limit of two servings per person will be allowed with each transaction. Sales of alcohol will be halted in the middle of the 7th inning.

Similar to football and basketball, rideshare drop-off and pick-up service will be made available at Razorback baseball games. The pregame rideshare drop-off location will be located at Baum Dr. near Gate B and the postgame rideshare pick-up location will be South of Baum-Walker Stadium at the University Village Shopping Center. A designated driver awareness program will also be implemented, encouraging fans to plan ahead on transportation options if they wish to consume alcohol on game day.

A portion of the proceeds from alcohol sales will be designated for use by the University of Arkansas’ Division of Student Affairs for alcohol-related education and programming for university students.

Fans will not be required to remove keys, shoes, belts, wallets, coins, watches, jewelry, coats or hats before passing through metal detectors. To expedite entry, it is recommended that fans hold their cell phone near their chest while walking through the metal detectors.

Public entrances to Baum-Walker Stadium will continue to open two hours prior to first pitch. Fans are encouraged to plan accordingly and arrive at least 15 minutes earlier than normal to help ensure they are in their seats for the first pitch.

The clear bag policy will still be in effect. To expedite the screening process, it is recommended that fans use their approved clear bag to carry all approved items. Each clear bag will be inspected by gate security staff at each metal detector.

As we begin the 98th season of Razorback Baseball, be sure to be on the lookout for new programming around the ballpark including:

Perfect Attendance Program
The nation’s best home-field advantage lives at Baum-Walker Stadium! Fans will be encouraged to use all of their season tickets for each and every game or to transfer them to a friend. Fans with perfect (80-100% scan rate of all tickets) attendance will be rewarded with an on-field recognition before the last game of the season, as well as, a commemorative 2020 Razorback Baseball Wall Sign.

Sounds of Baum
Music has always been a huge part of the Razorback Baseball experience and this season we are taking it to the next level. Baseball fans will get to choose the songs that they want to hear in the ballpark all season long. Song requests will be randomly chosen throughout the season via a special program that fans can participate in at the promotions booth located behind section 110.

Kids Run the Bases
For the first time at Baum-Walker Stadium, the Razorbacks are hosting Kids Run the Bases Days. This promotion will occur after SEC Sunday games during the 2020 season and will be open to children ages 5-13.

Military Appreciation Weekend
To celebrate National Military Appreciation Month, the Razorbacks are hosting Military Appreciation weekend for their series against Georgia, May 8-10. We will honor those who serve and have served our country via such things as; special on-field caps, patriotic fireworks, military-themed giveaways, recognition of veterans, ticket offers and much more will highlight the final weekend of the home schedule.

Light Show
Night games at Baum-Walker Stadium will never be the same. This year, at designated times before the ballgame, between innings and during selected pitching changes, fans can participate with their mobile devices in a light show that is synchronized with the ballpark audio. All fans need to do is download the Razorback Gameday App, click the menu in the top left corner and click “Light Show.” Your phone microphone will recognize that the light show is beginning and automatically sync your flashlight up.

The Razorbacks will be providing many different promotions and giveaways this season as they continue to make the Baum-Walker Stadium experience the best in the nation. Some of your favorite days and programming are returning this year including bobbleheads, camo hats and our guaranteed giveaway program, as well as some new items and events that will keep you coming back to the ballpark all season long.