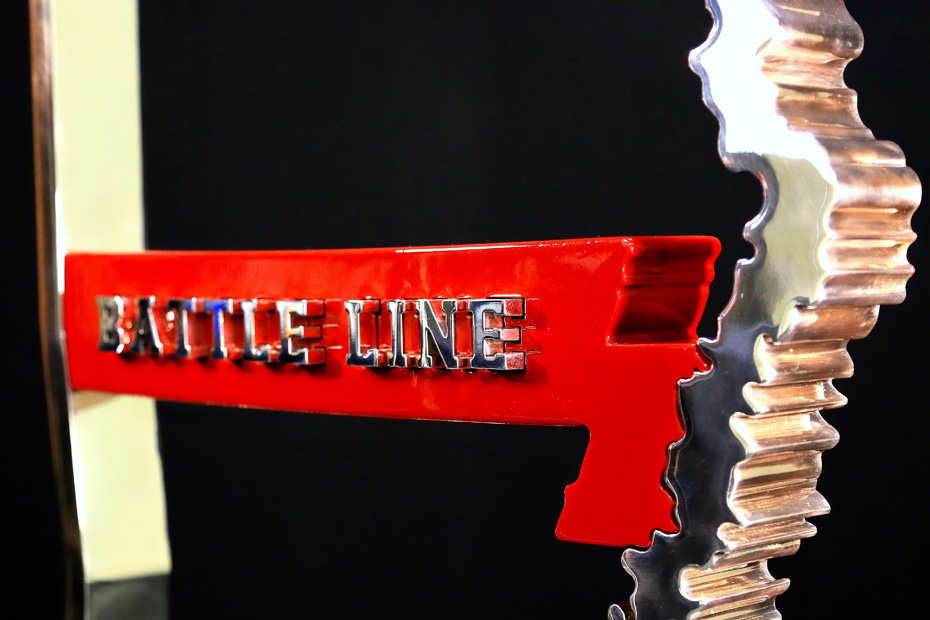 FAYETTEVILLE, Ark. – A new permanent trophy for the Battle Line Rivalry presented by Shelter Insurance® will be up for grabs when Southeastern Conference foes Missouri and Arkansas meet on the football field on Friday at 1:30 p.m. at Donald W. Reynolds Razorback Stadium.

The Battle Line Trophy is made of silver and stands more than four feet tall and weighs more than 180 pounds. The trophy depicts the outline of the two states with the border of the two states being divided by interchangeable silver inserts with the words Battle Line in either gold or cardinal. The color of the battle line within the trophy will be reflective of the winner of the most recent game in the series.

Former Razorback football student-athlete David Bazzel was the designer and project lead for the building of the Battle Line Trophy. Bazzel also created The Golden Boot, the annual trophy given to the winner of the Arkansas-LSU football series, the Broyles Award and numerous other trophies and awards. Supreme Fixture and Sissy’s Log Cabin of Little Rock were the primary companies involved in the construction of the trophy. 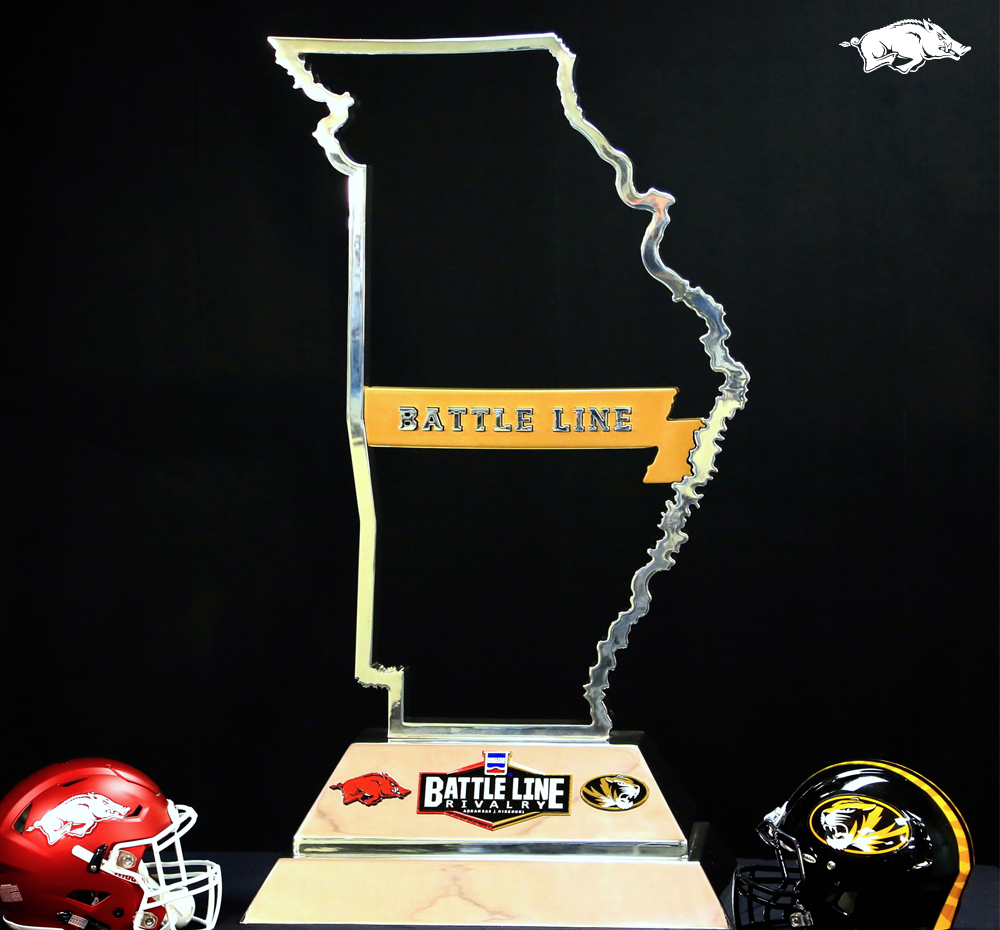 The Battle Line Rivalry clashes against both geographic and historical boundaries – from disputed demarcations of the border separating the two states to notable alumni and former personnel with ties to both storied athletic programs. The historic rivalry between the two states will take on even more meaning now, as every Thanksgiving weekend the Battle Line is drawn on the gridiron. The Razorbacks or Tigers will ultimately stake claim to the “Line” – until the next meeting.

“We are proud that one of the nation’s newest rivalries now has one of the most stunning trophies in all of college football,” said Jeff Long, University of Arkansas Vice Chancellor and Director of Athletics. “We are grateful to David for his vision and to all of those who worked to help create this beautiful silver work of art. With the support of Shelter Insurance, we are quickly turning the Battle Line Rivalry into a budding college football tradition.”

“We are excited to unveil a new trophy as part of the Battle Line Rivalry,” said Mack Rhoades, University of Missouri Director of Athletics. “We appreciate Shelter Insurance’s investment in the series and believe the annual Missouri-Arkansas game has the opportunity to grow into one of college football’s great Thanksgiving weekend traditions.”

“Shelter started in Missouri and Arkansas and these two states are key to our business,” said Rick Means, President and CEO of Shelter Insurance®.  “We’re pleased to be part of this rivalry which helps support two of the major college football programs in both states.”
The second annual Battle Line Rivalry presented by Shelter Insurance kicks off Friday, Nov. 27, at Donald W. Reynolds Razorback Stadium in Fayetteville, Ark.  The game is set for a nationally televised broadcast at 1:30 p.m. on CBS.

•   Presented to: Winner of the Battle Line Rivalry football game between the University of Arkansas and the University of Missouri
•   Sponsor of Battle Line Rivalry: Shelter Insurance
•   Precious Metal Used: Silver
•   Weight: 180 pounds
•   Height: 4’ 4” inches
•   Base: 2’5”
•   90lbs: Weight of the outline of Arkansas & Missouri
•   25lbs: Weight of each interchangeable “Battle Line” border piece
•   1200lbs & 2.5 inches: Weight & thickness of the steel used to cut the outline of Arkansas & Missouri
•   40 consecutive hours: The time it took for a water jet machine to cut the 90lb & 2.5 inch thick outline of Arkansas & Missouri. Because of the precision & quality of the cut and        thickness of steel, the water jet could only cut 1 inch per hour.
•   30 Hours (3 1/2 Days): Time of hand polish time on the trophy during production
•   400 Gallon Tank: Because of the size and weight of the trophy it took the 2nd largest tank in North America and 4 workers to hold the trophy during silver plating.
•   3 States: Main production of the trophy occurred in Arkansas, but segments of the process also occurred in California & Maryland

Companies involved in the production of the trophy: 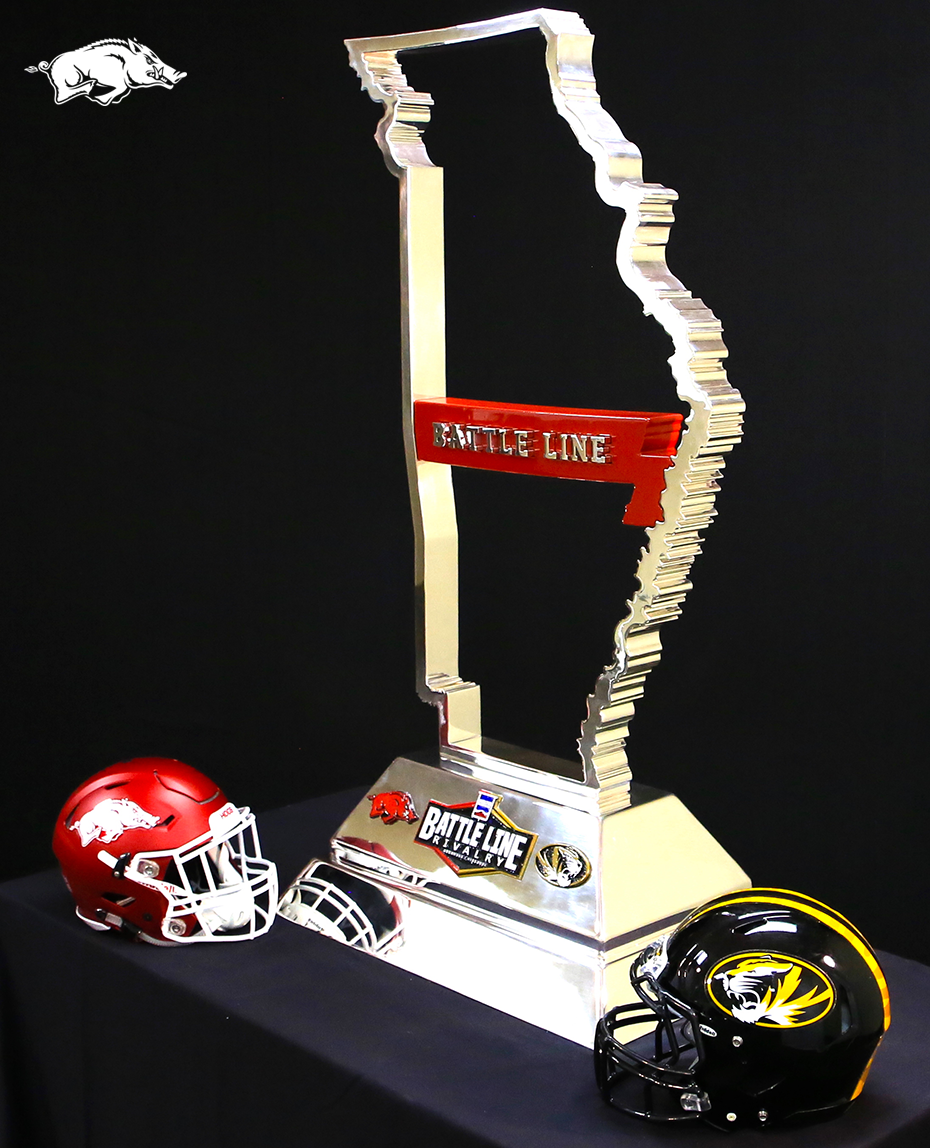 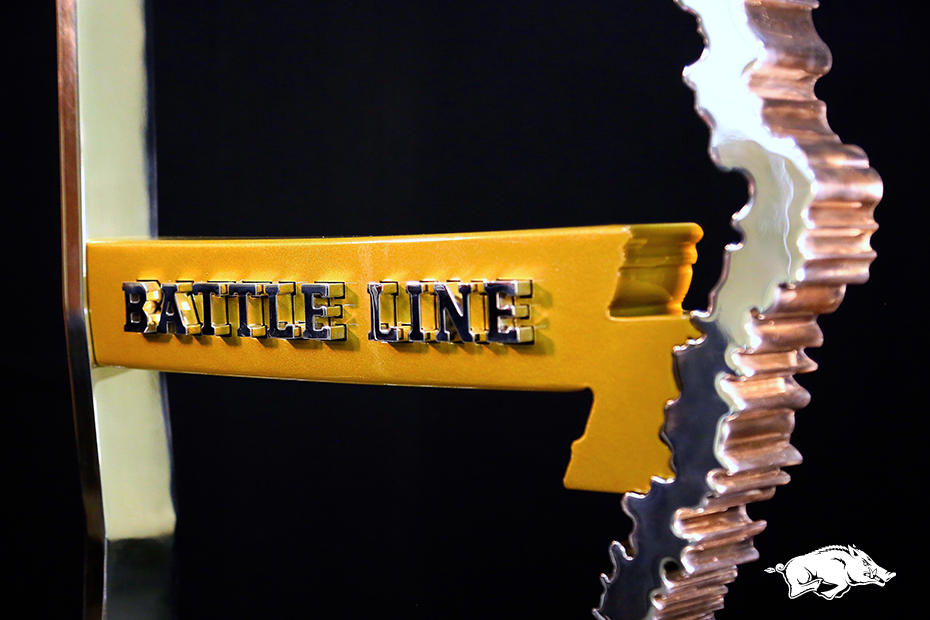 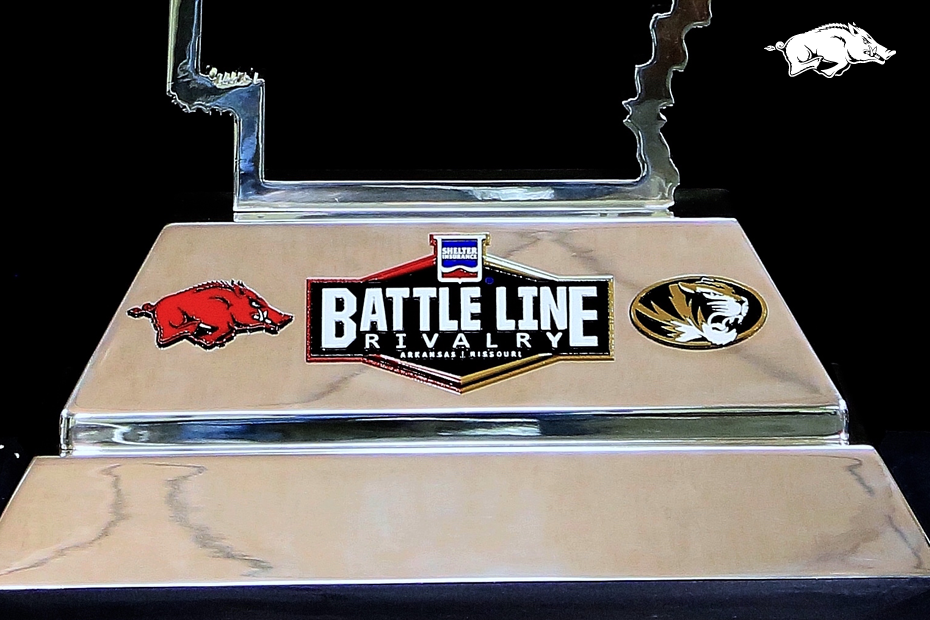 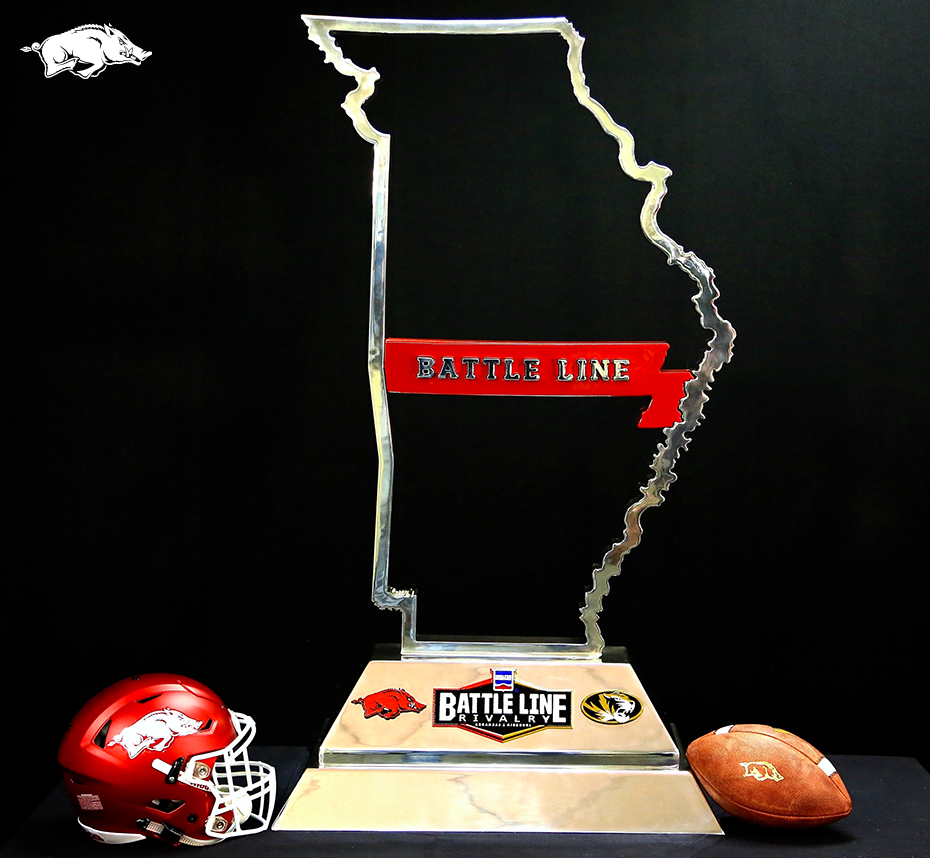