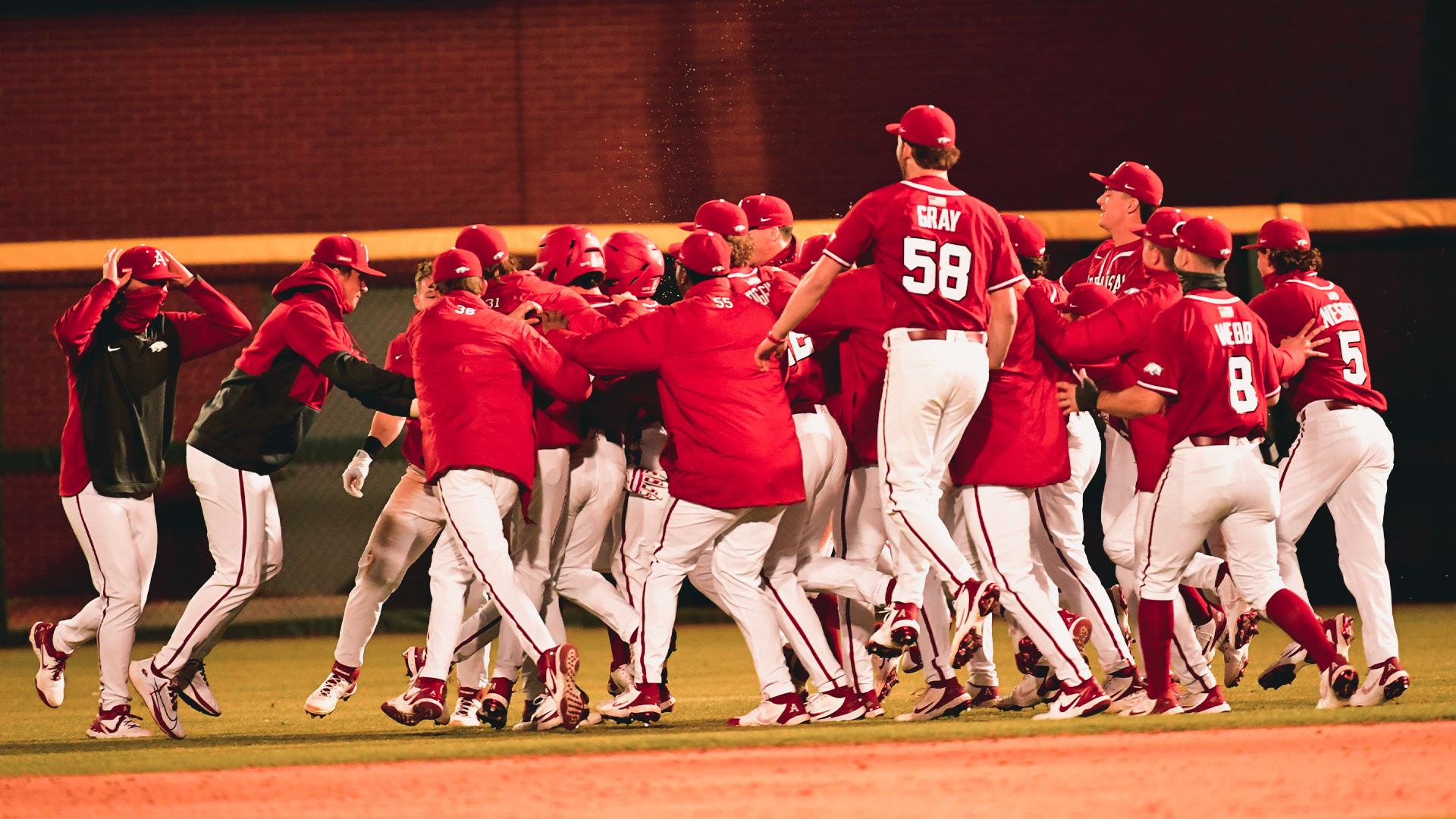 FAYETTEVILLE, Ark. – It took some late-game heroics, but the Razorbacks can add another one to the win column.

Shortstop Jalen Battles drove in the game-winning run in the 10th inning, poking an infield single past the reach of Southeast Missouri State pitcher Blake Cisneros to lift No. 2 Arkansas (4-0) to a 6-5 win on Thursday evening at Baum-Walker Stadium. The Hogs have now won 27 home openers in a row dating back to the 1995 campaign.

Arkansas’ bullpen once again did much of the heavy lifting after SEMO (2-2) staked an early 3-0 first-inning lead. Right-hander Patrick Wicklander entered in relief of starter Caleb Bolden and tossed four scoreless innings, striking out three.

The Razorbacks chipped away using the long ball, powered by outfielder Christian Franklin and first baseman Brady Slavens’ homers in the bottom of the third and fourth inning, respectively. The dingers cut the deficit to one, which held until the top of the eighth when SEMO tacked on two runs to take its second three-run lead of the ballgame.

Arkansas would enter the bottom of the ninth needing a rally. Fortunately, there was no quit in the Hogs.

Battles’ single knocked in outfielder Cayden Wallace to trim the deficit to two before Franklin drew a bases-loaded walk, scoring left fielder Zach Gregory to make it a one-run game. Third baseman Cullen Smith then tied the game at five, lifting a sacrifice fly to left to score Battles from third and send the Hogs and Redhawks to extras.

Right-hander Jaxon Wiggins took the mound in the top of the 10th and was once again phenomenal, picking up right where he left off last weekend at the State Farm College Baseball Showdown. The freshman struck out a pair in a clean one-two-three inning.

Catcher Casey Opitz’s one-out double in the bottom of the 10th started Arkansas’ game-winning sequence. Wallace then drew a walk in an impressive 14-pitch at-bat before Smith was plunked, loading the bases for Battles.

The junior-college product came up clutch once again, sneaking a groundball off the pitcher’s mitt and into no man’s land between the mound and second base. Opitz dashed home to score the game-winning run and secure the Hogs’ fourth straight win.

The Razorbacks have now scored 23 of their 27 total runs this season in the sixth inning or later. Nine of those 23 runs have come in the ninth inning.

Arkansas continues its homestand against SEMO tomorrow afternoon. First pitch in the second game of the series is set for 3 p.m. inside Baum-Walker Stadium.