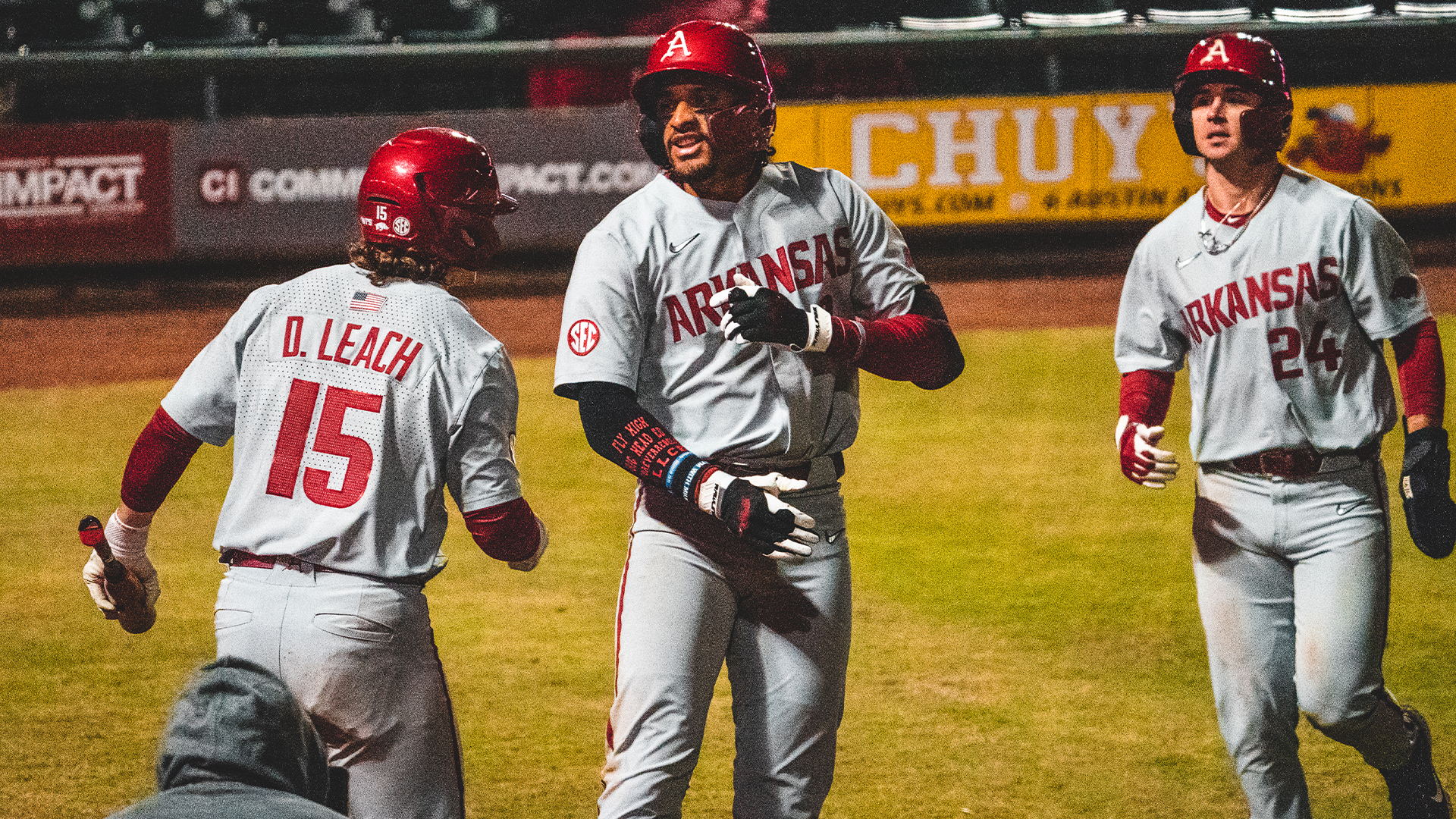 Trailing by one in the top of eighth, Battles cranked a three-run home run to left field to lift No. 2 Arkansas to a come-from-behind 6-4 win against Louisiana in the Karbach Round Rock Classic finale.

Arkansas, now 4-2 on the season, started the day with a loss to No. 6 Stanford before bouncing back against Louisiana to finish its weekend in Round Rock, Texas, with a 2-1 record. Third baseman Cayden Wallace and pitcher Kole Ramage were the Razorbacks’ representatives on the All-Tournament Team.

The Hogs return to the friendly confines of Baum-Walker Stadium this week for four games. Arkansas hosts Omaha at 3 p.m. Wednesday, March 2, before welcoming in Southeastern for a three-game set on March 4-6.

Stanford 5, Arkansas 0
Cardinal left-handed starter Quinn Mathews stifled the Razorback offense all afternoon, limiting Arkansas to two hits while striking out 10 over six shutout innings. The Hogs loaded the bases with two outs in the bottom of the fifth, but Mathews weathered the storm and escaped without damage.

True freshman Hagen Smith, meanwhile, started for Arkansas and tossed a scoreless first before running into trouble. The left-hander lasted 2 1/3 innings before he was driven from the game, allowing three runs while also striking out three.

Arkansas 6, Louisiana 4
Jaxon Wiggins turned in a career-long outing in his second start of the season for Arkansas, tossing six innings of three-hit, three-run ball with four strikeouts on Sunday night. After Louisiana tagged him for a run in the bottom of the first as well as two in the bottom of third, Wiggins kept the Ragin’ Cajuns at bay by turning in six strong frames.

The run support, however, came after Wiggins departed the ballgame. Trailing, 3-2, in the top of the eighth, Battles launched a no-doubt three-run shot to the berm over the wall in left field to give Arkansas much-needed life. Robert Moore roped a run-scoring double to left in the top of the ninth, extending the Hogs’ lead to three.

With Ramage on the bump in the bottom of the ninth, Battles sealed Arkansas’ 6-4 comeback win by starting a game-ending double play with a spectacular leaping grab.