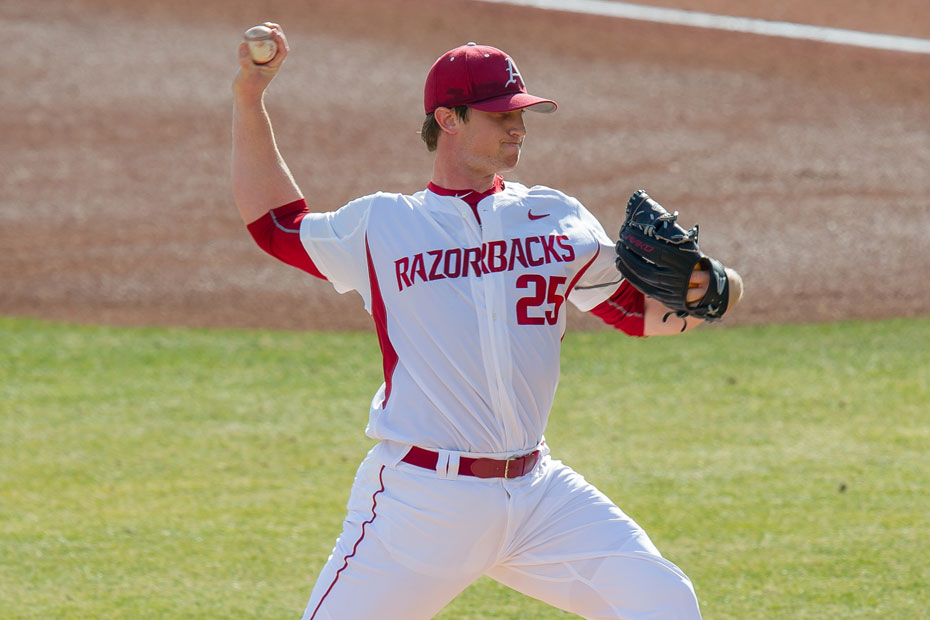 HOUSTON, Texas. – No. 18 Arkansas faces its first ranked opponents of the 2016 season this weekend as it takes part in the Houston Shriners Hospitals for Children College Classic at the Houston Astros’ Minute Maid Park. The Razorbacks start the weekend against No. 24 Rice on Friday at 7 p.m., then No. 9 Houston on Saturday at 3:30 p.m. The team will complete the three-day tournament on Sunday against No. 23 Texas Tech at 11 a.m.

Arkansas will still be on the radio waves, as usual, on the IMG Sports Network. Rick Schaeffer will have the call for Friday’s game and Scott Inman will join on Saturday and Sunday.

Tickets
Arkansas fans in the Houston area can buy single-day passes or a weekend package online at Astros.com/CollegeClassic. Tickets can also be purchased at the gate at Minute Maid Park.

Leading Off
•  No. 18 Arkansas heads into its second weekend of play with a perfect 5-0 record after sweeping the opening series against Central Michigan and the midweek series against Missisippi Valley State. All of Arkansas’ games this weekend in Houston will be televised on MLB Network or Root Sports Southwest and Cox Sports in certain states including Arkansas.
•  With its sweep of the Chippewas, Arkansas raised its profile in the four major polls, highlighted by the No. 18 ranking in the NCBWA poll.
•  Arkansas was tabbed to finish third in the SEC West in the preseason SEC Coaches Poll released on last week.
•  Dominic Taccolini gets the call for his second-straight Friday start this season. In last week’s opener, Taccolini clinched his first victory going seven innings strong, allowing just one hit and one earned run, while striking out three.
•  The last time Arkansas played at Minute Maid Park was in 2012 at the Houston College Classic. That year, the Hogs went 2-1 on the weekend defeating Texas Tech (3-1) and Texas (7-3), while only dropping one game to Houston (4-1).
•  The Razorbacks pummeled Mississippi Valley State during its midweek series this week, beating the Delta Devils, 21-4 and 20-0. It was the Hogs first 20-run outing since 2013 and first time since 2001 with 20 runs or more scored in multiple games
•  Fueled by a 96-15 (.858) mark under coach Van Horn, Arkansas is 261-75-1 (.771) all-time in the month of February.

Scouting Rice
• The Owls are 3-2 on the year dropping its season-opening series to Arizona, two games to one.
•  Rice only mustered seven runs of offense over the three games against the Wildcats, with four of those runs coming in the 4-1 Sunday win.
•  Dayne Wunderlich leads all Rice hitters with a .444 average, totaling four hits, one home run and two RBI.
•  Jon Duplantier might start vs. Arkansas as he leads his team a 1.50 ERA with only one earned run given up.

Scouting Houston
•  As a team, the Cougars are hitting .319 – led by seven home runs, nine doubles and two triples. Freshman Joe Davis is hitting a team-leading .571 through four games and has driven in a Houston-high 11 RBI.
•  Sophomore Corey Julks follows with a solid .438 clip, while senior Justin Montemayor (.375), sophomore Clay Casey (.333) and sophomore Connor Wong (.313) all hold averages above the .300 mark. Senior Jacob Campbell is second on the team with 10 RBI and is tied with Casey for the team lead in home runs with two apiece.
•  On the mound, the pitching was equally impressive – led by American Athletic Conference Pitcher of the Week John King, who tossed 6.0 shutout innings, allowing just one hit and nine strikeouts for his first win as a Cougar vs. Villanova. The staff also saw a strong Opening Night performance by Preseason All-American Andrew Lantrip, who went 6.0 innings, allowing two hits with five strikeouts for the win.

Scouting Texas Tech
•  Texas Tech has scored 47 runs through its first five games of the season, marking the second-straight year where the Red Raiders have scored at least 45 runs through five games.
•  Texas Tech has scored 22 of its 47 runs this season with two outs in the inning. The Red Raiders plated nine runs alone with two outs Wednesday night in an 11-6 victory over Sam Houston State.
•  Texas Tech has been impressive at the plate with runners in scoring position, hitting .403 overall (27-for-67) in such situations. Cory Raley, Eric Gutierrez and Ryan Long lead the Red Raiders with runners in scoring position as the trio is hitting .667 (4-for-6), .625 (5-for-8) and .500 (4-for- 8) so far this season.
•  The Texas Tech pitching staff, meanwhile, has been effective in limiting opponents with runners on base as opposing offenses are hitting just .187 (14-for-75) this season with runners on base.