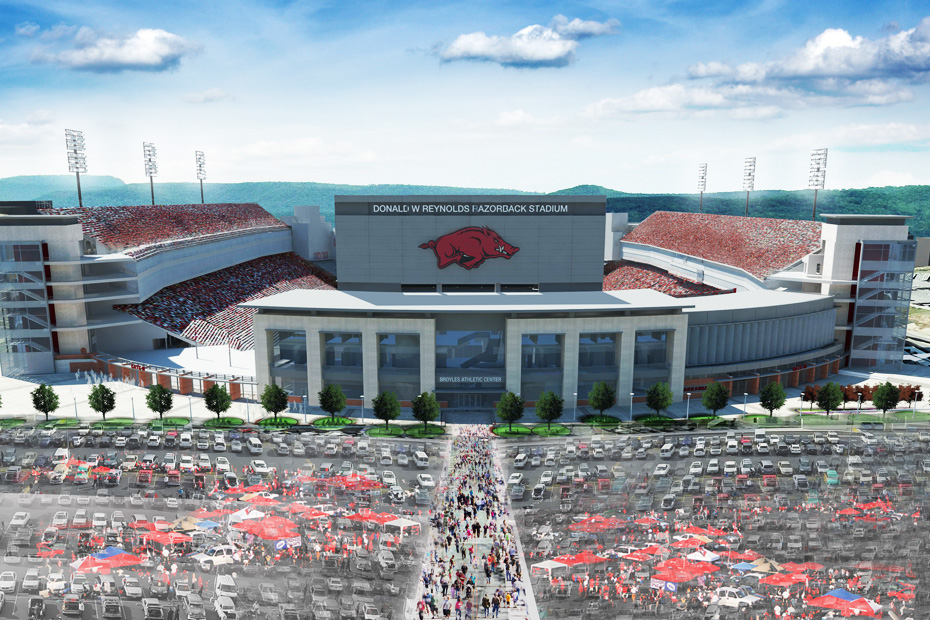 FAYETTEVILLE, Ark. – Donald W. Reynolds Razorback Stadium will soon be changing to better meet the needs of Razorback fans. On Thursday, the University of Arkansas Board of Trustees approved a $160 million stadium renovation and north end zone addition that will further enhance the Home of the Razorbacks for the benefit of all fans.

The project will be funded entirely by athletic revenues, gifts and bond proceeds from a future bond issue. Bonds will be amortized using athletic revenues generated from the stadium. No university funds, state funds or student fees will be required to complete this project.

“We are pleased to be moving forward with this important project that will improve the game day experience for all Razorback fans visiting Donald W. Reynolds Razorback Stadium,” Vice Chancellor and Director of Athletics Jeff Long said. “We appreciate the due diligence shown by the Board of Trustees in this process and are appreciative of their support. Every fan that attends a game will benefit from the enhancements throughout the stadium, including renovations to existing areas, the addition of public elevators and a north concourse to allow fans to move more freely within the stadium and a south video board.

“The project has never been intended to dramatically increase the capacity of the stadium by simply adding more seats. It is designed to enhance the game day experience for every fan as well as meet the demonstrated demand for suite and club areas that currently are at more than 98 percent occupancy. These additions will not only allow fans more game day options, but will open opportunities for new fans at varying price levels, including reduced price tickets in the upper level.” 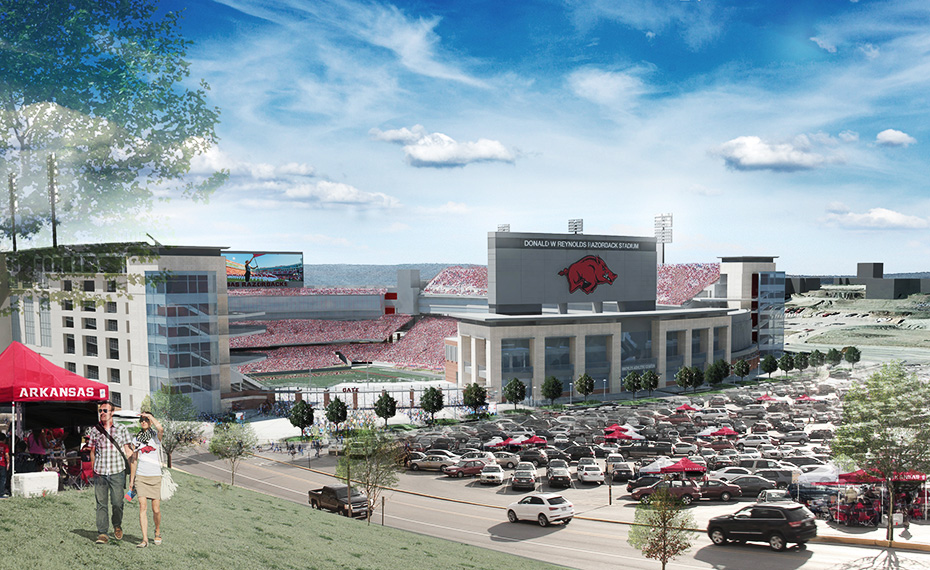 The project is about the fans of Razorback Football. The guiding force behind the scope and project design is the development of seating types and amenities that fit what the fans are asking for, as well as updating areas of the stadium that have not been touched since the last major stadium project more than 15 years ago in 2001. The experience of Arkansas fans is critical to keeping patrons coming to games and to maintaining the environment needed for a true home field advantage. In addition, updates will include improved traffic flow into and through the stadium, as well as enhancing their safety within the stadium. The project is scheduled to be completed in time for the 2018 football season.

North end zone. The north addition will include new suites, loge boxes, club seats, and club areas. The east and west concourses will connect to allow the flow of patrons around the stadium, as well as provide new concessions and restrooms. Additional and expanded entrances will improve patron flow. A new game day locker room, training room, and pre/post game support rooms will be added for the football team.

Stadium updates. New elevators will be installed at the northeast and northwest corners to service the existing east and west suites, club areas, and upper level seating. Existing suites and club areas will be renovated and updated. A new video board will be added at the south end of the stadium. Security and safety systems will be enhanced.

In 2009, the Department of Athletics hired specialty consultants to develop a Facilities Master Plan for Razorback Athletics. Included in the master plan was a general concept and program for the expansion of Donald W. Reynolds Razorback Stadium at the north end.

In 2013, the Department of Athletics brought together a project team to further study the feasibility of a north end zone expansion, additional updates needed within the stadium, along with a market study for the demand of different types of seating and amenities at home football games. The last major Donald W. Reynolds Razorback Stadium renovation was completed in time for the 2001 season.