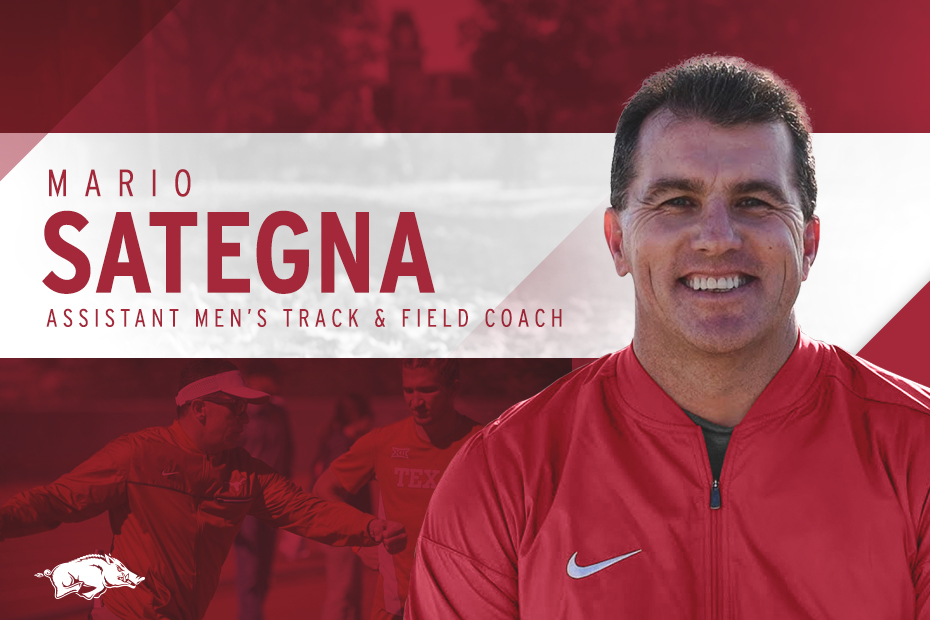 FAYETTEVILLE, Ark. – A two-time National Assistant Coach of the Year and eight-time Big 12 Coach of the Year, Mario Sategna (suh-TANE-yuh) – a mainstay on the staff at the University of Texas over the last 15 years – will bring his experience to The Hill as an assistant coach of the Razorback men’s track & field program, head coach Chris Bucknam announced on Monday.

“I have known Coach Sategna for almost 20 years,” said Bucknam. “He is one of the best and most versatile technical coaches in the world. His experiences as the head coach of the U.S. National Team at the 2017 World Championships, an assistant coach at the Rio Olympics and a part of Texas’s track & field program for 15 years make him the ideal coach to assist with our program. He is a fierce competitor and a great person, he understands what it takes to build a championship program at the NCAA and Olympic level, and he fits in with our team-oriented goals. His diverse range of abilities to coach any field event is especially impressive. We welcome Mario, his wife Dahlia and his three children to Fayetteville.”

The men’s head coach of the U.S. National Team at the 2017 IAAF World Championships, as well as an assistant coach for the United States at the 2016 Rio Olympic Games and 2011 IAAF World Championships, Satenga’s tenure as the head men’s and women’s coach at Texas was marked by some of the best seasons in program history. With Sategna at the helm, the Longhorn men and women combined for 11 Big 12 Conference Team Titles, including the first three-peat in conference history in men’s outdoor track and field, 80 Big 12 Individual Conference Champions and 118 All-Americans. Under Sategna’s watch, the Longhorns posted a pair of NCAA runner-up finishes, five NCAA top-five finishes, and 11 top-10 finishes. Over 15 years at Texas, he was the personal coach of 14 NCAA Champions and 62 All-Americans.

“I am honored for the opportunity to coach at the most successful men’s track & field program in the history of the NCAA,” said Sategna. “To be a part of a program with such a rich history and a tradition of winning is truly an honor. There isn’t a more storied team in college athletics, and I am excited to become a part of it.  Most importantly, I am sincerely grateful to Coach Chris Bucknam for the opportunity to coach here at Arkansas. I not only look forward to working with Coach Bucknam, but I am excited to coach alongside Coach Doug Case to develop Arkansas student-athletes into SEC Champions, NCAA Champions, and beyond.”

In almost two decades as a collegiate coach, Sategna has been the personal coach to an athlete at every Olympics and World Championships dating back to 2008. He has coached athletes to three gold medals, two silvers and a bronze.  In 2016, he helped Ryan Crouser win the Olympic Gold Medal in the shot put.  In 2012, he helped Marquise Goodwin capture the long jump title at the 2012 U.S. Olympic Trials, before finishing 10th at the London Olympics. Goodwin became the first collegian to win both the Olympic Trials and the NCAA Outdoor long jump competition in the same year since 1960.

Sategna also trained former NCAA decathlon record-holder, Trey Hardee. Hardee won the silver medal in the decathlon at the 2012 Summer Olympics and gold medals at the 2011 and 2009 IAAF World Championships. In 2012, he tallied 8,671 points and was in second place from wire-to-wire behind fellow American Ashton Eaton who had 8,869-points and was in reach of the Olympic record (8,893 by Roman Sebrle of the Czech Republic in 2004). Eaton and Hardee became the first Americans to go 1-2 in the Olympic decathlon since Milton Campbell and Rafer Johnson in 1956.

Sategna arrived at the University of Texas following a stint at the University of Minnesota where he was the men’s assistant coach for four years (1999-03). In that position, he was in charge of the throws, multi-events, pole vault and high hurdles events. He coached student-athletes to four Big Ten individual crowns, two All-America honors and eight school records. Sategna also helped guide Minnesota to the Big Ten Conference Outdoor title, a first-place finish in the USTCA Indoor Team Power Rankings and top 10 showings at the NCAA Indoor and Outdoor Championships during the 2003 campaign.

Before his tenure at Minnesota, Sategna served as an assistant coach in charge of throws at Wichita State from 1998-99. Before his stint with the Shockers, Sategna was a physical education teacher and track & field coach at Albuquerque (N.M.) Academy in 1997-98 and a volunteer assistant track and field coach at LSU in 1996-97.

A standout decathlete, Sategna was a three-time All-American at LSU in the 1990s. He won the 1994 Southeastern Conference title and the 1995 NCAA Championship in the decathlon, and his personal-best point total of 8,172 still stands as the LSU record. He also finished sixth in the World University Games, was a 1996 United States Olympic Trials qualifier and won the 1997 U.S. versus Germany Decathlon Dual meet (8,107).

A native of Bloomfield, N.M., Sategna earned a Bachelor of Science degree in kinesiology from LSU in 1996 and a Master of Education degree in applied kinesiology from Minnesota in 2002. Sategna is USATF Level II certified in sprints, hurdles, throws, and multi-events.

What they are saying about Mario Sategna:

“Mario Sategna has established himself as one of the premier technical coaches in the collegiate system. I had the good fortune to work with Mario in 2011 at World Champs in South Korea and again in Rio at the Olympic Games in 2016. The athlete’s best interests are always his No. 1 priority.” – Vin Lananna, 2016 U.S. Olympic Team Head Coach – Men’s Track and Field

“Mario’s coaching and focus on the fundamentals of each event really leads to success for all of his athletes, from conference hopefuls to Olympic champions.  He has helped me many times with a ‘step back’ approach towards keeping things simple and focusing on what the athlete can control. He has also helped me grow a lot as an individual, and I am glad that he will continue to have the opportunity to positively influence the lives of young student-athletes as he has mine.” – Ryan Crouser, Olympic Gold Medalist, and four-time NCAA Champion

“Mario is one of very few coaches in the world with a roster of athletes that have been Olympic, World, National, NCAA, and conference champions.  His eye for talent and ability to develop kids to their fullest potential is second to none.  Arkansas has an impeccable Track and Field tradition and Mario is a great fit.”  – Trey Hardee, Two-time World Championships Gold Medalist, and Olympic Silver Medalist

“Mario helped me develop a thick skin as well as a relentless focus while competing throughout my collegiate and international track career. I think it developed from us constantly communicating at practice, walking to the stadium, the weight room, the airport on the way to trips, or even over dinner.  I’d never had a coach before Mario so encouraging and yet challenging at the same time.  I think his way of keeping me focused on being deliberate in my approach to my craft, ultimately helped me to become a two-time NCAA champion and later become one of the youngest Texas Longhorns in history to win a USA Olympic trials title.” – Marquise Goodwin, Olympic Long Jump Finalist, and NFL Wide Receiver

“I have known Coach Sategna for over 16 years. I’ve always found him to be respectful, honest and a true friend to me and my family. Coach Sategna was a great mentor and teacher to me throughout my entire career. Arkansas is getting a proven winner!!!”  – Andra Manson, World Indoor Championship Bronze Medalist