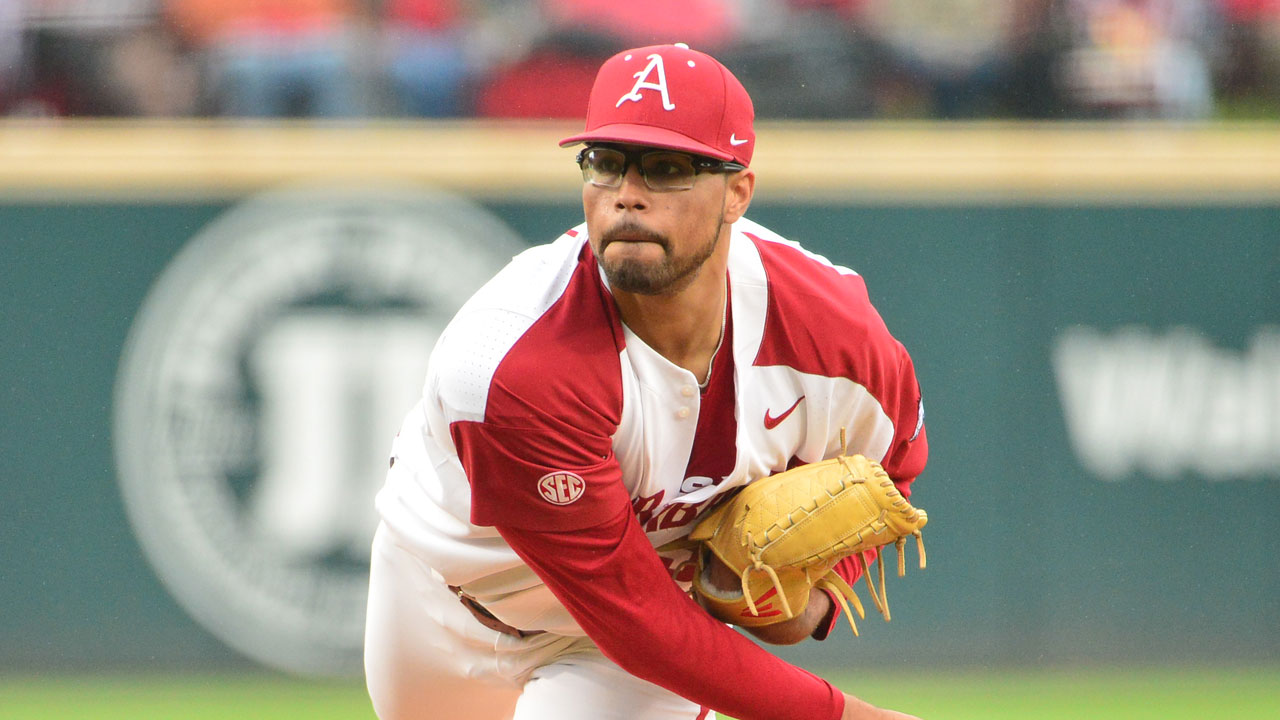 DURHAM, N.C. – Arkansas redshirt-junior right-hander Isaiah Campbell is one of 25 amateur players named by USA Baseball as a Golden Spikes Award semifinalist on Wednesday. The 42nd Golden Spikes Award recognizes the top amateur baseball player in the country for the 2019 season and will be presented on June 14 in Los Angeles.

Beginning with the announcement of semifinalists, a ballot will be sent to the Golden Spikes Award voting body consisting of national baseball media, select professional baseball personnel, previous Golden Spikes Award winners and select USA Baseball staff, totaling a group of over 200 voters. From Wednesday, May 15 through Sunday, May 26, each voting member will select three athletes from the Golden Spikes Award ballot of semifinalists and fan voting will simultaneously be open on GoldenSpikesAward.com. Selections made by the voting body will carry a 95% weight of each athlete’s total, while fan votes will account for the remaining 5%.

The finalists will then be announced on Wednesday, May 29. Beginning that same day through Monday, June 10, the voting body and fans will be able to cast their final vote for the Golden Spikes Award winner.

Campbell was not named to the Golden Spikes Preseason Watch List prior to the start of the 2019 season, but was added to the midseason watch list after his strong redshirt junior season. Campbell is 9-1 after 13 starts and has 10 quality outings to his name, including 12 outings of five innings or more. The nine wins ties for second in the SEC and his 84 innings tie for first.

Campbell is the first Razorback to be named a semifinalist for the Golden Spikes Award since Andrew Benintendi in 2015. Benintendi won the award that year, making him the first Hog to ever win the prestigious award in school history. He along with Philip Stidham are the only Razorbacks to ever be named finalists for the Golden Spikes Award. Campbell also joins an exclusive club of Razorbacks to ever be named semifinalists, including Nick Schmidt (2007), Zack Cox (2010), DJ Baxendale (2011) and Ryne Stanek (2013).

As for Campbell, he has, seemingly, followed in the footsteps of top Arkansas arms and become one of the Friday night aces of the SEC. His 6.50 strikeout-to-walk ratio is third in the conference and 12th in the nation. He is also nine strikeouts away from eclipsing the 100-strikeout mark, which would make him the 12th Razorback to do so in school history

Since 1978, USA Baseball has honored the top amateur baseball player in the country with the Golden Spikes Award. Following the first-ever presentation of the Award to Bob Horner of Arizona State, the Golden Spikes Award has been presented each year to the player who exhibits exceptional athletic ability and exemplary sportsmanship.

Campbell and the Razorbacks are on the road this week for their final regular-season series of 2019 as they get set to take on 17th-ranked Texas A&M starting on Thursday at Blue Bell Park. Game one is slated for a 6 p.m. first pitch on ESPNU.

A complete list of the 25-player Golden Spikes Award semifinalists is as follows: