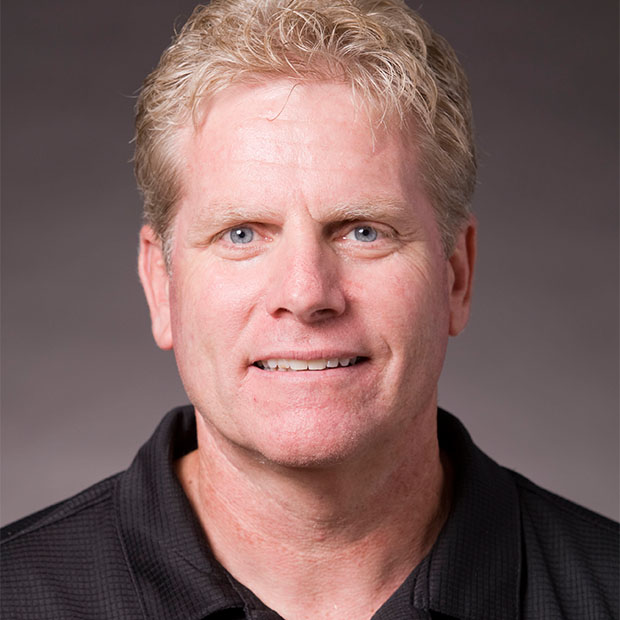 Chris Bucknam is in his 15th season as the head coach of the nationally dominant Arkansas men’s cross country and track and field program. A veteran in the coaching ranks, Bucknam became the Razorback head coach on June 27, 2008, following a 25-year career at Northern Iowa.

As head coach at Arkansas, Bucknam has enjoyed tremendous success in the form of 27 Southeastern Conference championships, nine NCAA regional titles, and 338 All-Americans, guiding the Razorbacks to 76 individual SEC event titles. The SEC team titles Razorback squads have claimed under Bucknam include 10 in cross country, 11 during indoor, and seven in the outdoor season.

During the 2021-22 campaign, Arkansas achieved its 25th conference triple crown, the 17th within the SEC and fifth for Bucknam. From the 2020 indoor season to the 2022 outdoor season, the Razorbacks captured seven consecutive SEC championships through cross country, indoor and outdoor seasons.

Nationally, Bucknam’s guidance has led the Razorbacks to 24 top 10 finishes since his arrival in Fayetteville. His cross country squads have placed in the top 10 on six occasions in his tenure while the track and field program has generated 18 top 10 performances, including a national championship and four national runner-up finishes.

In the 2021 season, with a pair of NCAA Championships held two days apart, the Razorbacks tied for seventh place while hosting the NCAA Indoor meet and then earned a podium finish by placing fourth in the NCAA Cross Country meet held in Stillwater, Oklahoma. Four members of the cross country team also competed in the national indoor meet, logging a total of 66km between the two meets over four days.

In 2021-22, the Razorbacks repeated those national finishes with a fourth-place podium in cross country and seventh at NCAA Indoor.

One of the most phenomenal performances in the history of NCAA track and field came in 2016 from one of Bucknam’s Razorback leaders Jarrion Lawson. In an incredulous feat of athleticism Lawson captured three NCAA individual titles for the Razorbacks, matching the Jesse Owens triple with victories in the 100, 200 and long jump at the outdoor championship.

Entering the competition as the No. 1 ranked team in the nation, the Razorbacks did not disappoint the hometown crowd at the Randal Tyson Track Center as Arkansas scored 74 points and racked up 25 All-America honors at the meet. Two individuals captured NCAA titles and a collegiate record in the 4×400 relay added a third national title to the Razorbacks’ dominating performance.

Along with the indoor title, Arkansas placed 10th at the NCAA Cross Country Championship and third during the NCAA outdoor meet, which enabled the program to claim its first John McDonnell Program of the Year award, named after the legendary Arkansas coach whom Bucknam took over for following his retirement.

Bucknam was named national coach of the year in 2013 and has earned SEC Coach of the Year 28 times.

The national recognition as the best program in the country reflected on the effort by Bucknam and his staff in maintaining the programs elite status. In 2011-12, Arkansas won the program’s 13th SEC Triple Crown and the first with Bucknam at the helm. The Razorbacks duplicated the conference triple crown in 2012-13, as Arkansas claimed 11 league championships over a five-year span. No other SEC school had more than two in that same time frame.

As the head coach, Bucknam’s charge is to look at the big picture and lead his team to championships, but that doesn’t deter him from his work with the Razorback distance crew. He has led the program to 154 marks that have etched themselves on Arkansas’ prestigious all-time top 10 lists including 14 school records since his arrival in 2008.

During his first season distance medley relay squad of Alex McClary, Ben Skidmore, Chris Bilbrew, and Dorian Ulrey eclipsed an 11-year-old record, which had not even been close to being broken since it was set in 1998, at the UW Invitational when it ran 9:28.35. The outdoor school record was set by Shawn Forrest, when he shattered the 10,000-meter mark with a time of 27:52.10 at the Payton Jordan Invitational.

Ulrey’s three-year Arkansas career was one of the more celebrated in Razorback history as the Port Byron, Ill. native earned eight All-America honors, one NCAA Championship, seven SEC titles, two SEC Athlete of the Year awards and the league’s sportsmanship award. The lessons that Ulrey picked up in Fayetteville have served him well since he completed his eligibility as he continues to perform well professionally.

Along with the success of his student-athletes in the competition arena, Razorbacks have been equally as good in the classroom. The Razorbacks were named the USTFCCCA Indoor and Outdoor Scholar Team of the Year in 2015 in recognition of the program’s excellent cumulative GPA and athletic performance.

Prior to taking over the Arkansas program, Bucknam was a well-respected head coach at Northern Iowa where he led his teams to 35 conference championships, two top-10, and six top-20 finishes at the NCAA Indoor and Outdoor Championships. He was named conference coach of the year 33 times while in Cedar Falls, Iowa, and coached three individual national champions and 34 All-Americans who earned a total of 85 honors.

His time with the Panthers saw him lead the men’s program for 25 seasons and a combined track and field operation for the final 11 years. Bucknam’s career at Northern Iowa began as an assistant in 1979 before he assumed the head coaching job prior to the 1984 campaign. Along with his various conference coach of the year awards, Bucknam was also honored regionally for his acumen with nine USTFCCCA Midwest Region Coach of the Year honors.

A native of Beverly, Mass., Bucknam attended Norwich University in Northfield, Vermont, where he was a cross country and track letterman. He was elected cross country co-captain his senior year and is a member of the Norwich Athletic Hall of Fame. He earned his bachelor’s degree in physical education in 1978. He earned his master’s degree in physical education from Northern Iowa in 1982.

He and his wife, Cindy, are the parents of a son, Eric, and a daughter, Kate.