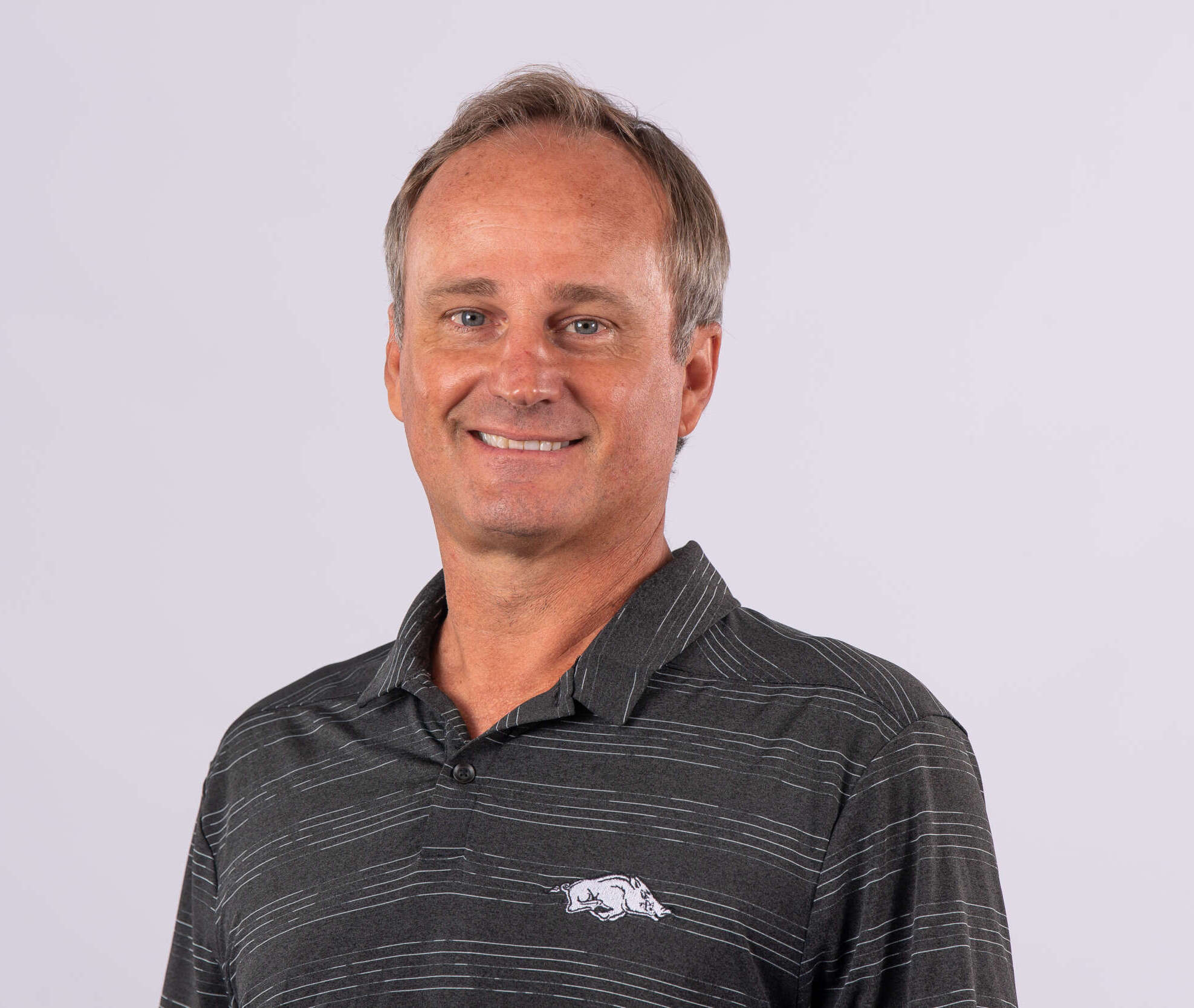 Colby Hale enters his 11th season as head soccer coach at the University of Arkansas after being named to the position on Dec. 21, 2011.

Hale and the Razorbacks repeated in 2021 to win their third-straight SEC regular-season title. Arkansas won a program-record 19 matches and earned a two-seed in the NCAA Tournament where Hale led the Razorbacks to their first Elite 8 appearance, finishing as No. 7 in the final rankings. The squad led the SEC in goals, goals per game, points, assists, assists per game, and shots. Bryana Hunter was named the program’s 13th SEC Scholar-Athlete of the Year, she also garnered Academic All-American honors. Parker Goins was awarded the program’s first SEC Midfielder of the Year, along with a First Team All-American selection. The record-setting team saw six Hogs earn All-SEC honors, and they advanced to their sixth-straight SEC Tournament championship game. For the first time, Razorback Field hosted the first three rounds of the NCAA Tournament and finished No. 5 in the country in attendance.

2020- Arkansas climbed to a season-high No. 3 ranking in the fall polls and was selected as the No. 6 national seed in the NCAA Tournament. Hale won SEC Co-Coach of the year, while Anna Podojil became the first SEC Forward of the Year in school history. Podojil then became the first First Team All-American in program history while Parker Goins was named Third Team All-American, just the third Razorback to earn the honor. Arkansas also put three on the MAC Hermann Award Watch List for the first time in school history. Once again the Hogs led the SEC in total points, goals, and assists, and had the top-ranked scoring offense. Arkansas earned its seventh NCAA Tournament appearance in eight seasons, reaching the Sweet 16 for the second time in school history, and advanced to the SEC Tournament final for the fifth-straight year.

In 2019 Hale led the program to it’s first conference championship, tying a program record with eight SEC wins. Arkansas reached as high as No. 6 in the United Soccer Coaches poll, ultimately securing a top-10 finish in the NCAA RPI at the end of the season. In a campaign that saw Arkansas knock off top-ranked North Carolina, Hale became the first Arkansas coach to be named SEC Coach of the Year. Hale and the Razorbacks were first in the conference in goals (62), assists (63) and points (187). Anna Podojil and Haley VanFossen became the first All-Americans in program history and were the first SEC Defender and Freshman of the Year in Razorback history.

In 2018, the Razorbacks recorded their third-straight 10+-win season after going 14-5-4 and 6-3-1 in SEC play. They also earned a top-four seed in the SEC Tournament and made a run to the tournament final for the third-straight year. The regular season was filled with results against top-25 opponents coupled with an unbeaten record in Fayetteville, a first in school history. The Razorbacks earned draws against No. 9 West Virginia and No. 25 Mississippi State, while also defeating No. 2 Texas A&M and No. 21 Auburn. Those four results were more than any other team in the SEC.

With its strong home record, Arkansas was named one of the 32 host sites for the first round of the 2018 NCAA Tournament where it played and defeated Sun Belt-champion Little Rock, 5-1, to advance to the second round. It was the second time in school history that Razorback Field has been named a host site for an NCAA Tournament match and both have occurred under Hale.

Hale’s teams have shown a postseason prowess throughout his seven years, as the Razorbacks have been a force in November, especially over the last four seasons. Including reaching the SEC Tournament in seven of the last eight seasons, Arkansas has reached the SEC Tournament final six-straight times under Hale, in 2016, 2017, 2018, 2019, 2020, and 2021.

The 2017 tournament run might have been the most improbable as the Razorbacks entered the conference tournament as the eight seed, but rolled off wins over nine-seed Ole Miss (1-0), one-seed South Carolina (1-0), and four-seed Vanderbilt (1-1, 4-2 on PK’s) before bowing out against two-seed Texas A&M (2-1). Arkansas became the lowest-seeded team to ever reach the tournament final and the run helped secure the school’s ninth 10-win season and fourth NCAA Tournament appearance.

Attendance at Razorback Field has also seen an uptick since Hale’s arrival and each year, the numbers continue to rise.

The 2016 season had plenty of historic moments for Hale and the Razorbacks. Arkansas finished the year 18-5-1 and ranked No. 19 on the National Soccer Coaches Association of America (NSCAA) top-25 poll. The team peaked at No. 11 following school-record eight-straight wins from Sept. 9, 2016 to Oct. 9, 2016. The 18 wins were also a school record for victories in a single season.

Hale guided the team to their first win against a top-10 opponent against then-No.2-ranked Duke on Aug. 26 in front of a record-breaking crowd at Razorback Field. Arkansas would also upset then-No. 4-ranked Florida 2-1 on Sept. 16 at home for the program’s first victory against the Gators. These two wins against top-five programs and other quality opponents would catapult Arkansas to its highest NCAA RPI ranking in school history, topping out at No. 9 on Sept. 28.

Hale would also gain the unique honor of being Arkansas’ winningest soccer coach after earning his 46th career win as a Razorback following a 1-0 victory over North Texas on Sept. 11, 2016. He would later lead the team to its fourth SEC Tournament, where it competed in its first SEC Tournament championship match since 1996. The Razorbacks also earned their third NCAA Tournament bid in four years and hosted the program’s first NCAA Tournament match at home in school history.

Soccer completed the 2015 season at 6-11-1. Season highlights included a 2-2 tie in double-overtime against No. 10 South Carolina on Oct. 2, the program’s first result against a top-10 program since 2007; the selection of hybrid defender/midfielder Carly Hoke as the 2015 SEC Freshman of the Year; and senior defender Teni Butler being named by the Razorback Foundation as a Red Tie Co-Female Scholar-Athlete of the Year. Home attendance was also strong for a second consecutive year, with the all-time attendance mark at Razorback Field topped on Aug. 23 against TCU.

Hale and the Razorbacks finished the 2014 season with a 9-7-6 overall mark, giving the program its first back-to-back winning season since the 2008 and 2009 seasons. Arkansas was also the No. 9 seed in the conference tournament and earned the program’s second consecutive bid to the NCAA Tournament (second in school history). After picking up a 3-2 overtime victory at Oklahoma in the opening round of the NCAA Tournament, the Razorbacks fell at No. 3 Stanford, 1-0, in the Round of 32 to end the season.

In just his second season at the helm, Hale posted the most successful season in Razorback soccer history at 15-8-1, leading his team to the NCAA Tournament for the first time in the program’s 28 year history. In the team’s tournament debut, Hale guided the Razorbacks past Oklahoma State and St. John’s to the final round of 16.

Hale had a plan to take the program to the next level and set the bar high in his first season at Arkansas. In the 2012 preseason, he talked about the team’s “identity” and “blue-collar mentality,” and how the Razorbacks would be dependent on a team concept and not the play of two or three stars. Hale and the Razorbacks saw the results of that blue-collar mentality and hard work pay off with a dramatic turnaround.

That step led to a 4.5 game improvement from 2011, including four more wins in conference play.

Hale became just the third of eight Arkansas soccer head coaches to win his first game as coach, topping Austin Peay 2-1 at home on Aug. 17, 2012. Two days later, the Razorbacks followed up with their first big win of the season by beating Texas 1-0 for the first time in program history in Fayetteville.

Prior to landing the top spot at Arkansas, Hale, one of the nation’s fastest rising assistant coaches, helped guide multiple programs to success on the field and in the classroom. He moved to Arkansas after spending the previous nine seasons at the University of Central Florida (UCF), helping the Knights to 130 wins (130-50-22) with six conference championships (four Conference USA, two Atlantic Sun), seven NCAA Tournament bids and eight wins in the postseason. In seven years at Conference USA, UCF was 56-11-9 with four league titles.

As the recruiting coordinator at UCF, he brought in six classes ranked among the nation’s best, including the No. 24 class in 2006 and the No. 39 class in 2008.

The highlight of Hale’s time in Orlando was in 2011 when the Knights reached the Elite Eight of the NCAA Tournament with wins over Florida International, No. 20 Florida and No. 19 North Carolina before falling to No. 6 Wake Forest. UCF finished 13-5-6, and ranked No. 12 in the nation in the final National Soccer Coaches Association Continental Tire poll and No. 20 in the RPI rankings against the 11th-toughest schedule in the nation.

Before going to UCF, Hale was an assistant for three years at Oral Roberts. He helped the Golden Eagles win two Mid-Continent Conference regular-season titles and set a school record for wins in 2000 (14). During his tenure at ORU, the team went 38-19-5, including the nation’s longest unbeaten streak of 11 games in 2001.

Hale has also worked as the director of coaching at the Central Tulsa Thunder Soccer Club and as a boys soccer assistant at Union High School in Tulsa when Union won the 1997 Oklahoma Class 5A state title.

He graduated from Oral Roberts University in 1997 with a bachelor’s degree in theology. Hale played for two years in England before lettering three times at Oral Roberts, where he was a two-time team captain.

The husband of wife Brittany and father to son Callen and daughters Charlee and Samantha, Hale has his USSF “A” license, NSCAA Premier License, NSCAA Distinguished License and NSCAA Advanced National License.