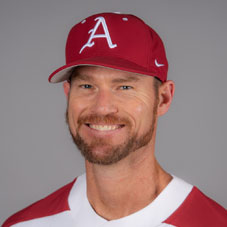 Matt Hobbs enters his fifth season as an assistant coach for the Arkansas baseball program in 2023.

Hobbs, the Razorbacks’ pitching coach, has helped develop numerous All-America and All-SEC honorees as well as 16 MLB draft selections since joining Arkansas as an assistant coach ahead of the 2019 campaign. Under Hobbs’ tutelage, pitcher Kevin Kopps emerged as the best college baseball player in the country in 2021, winning both the Golden Spikes Award and Dick Howser Trophy.

Arkansas has struck out opposing hitters at a historic clip since Hobbs began working with the pitchers, posting three of the top-five school records for strikeouts in a season under his watch. The 2022 season was no different as the Razorback pitching staff racked up 674 strikeouts to set a new single-season school record for the second consecutive year.

Hobbs’ pitchers, which included five 2022 MLB draftees in Peyton Pallette, Evan Taylor, Connor Noland, Zebulon Vermillion and Mark Adamiak, helped power the Hogs to a 46-21 overall record during the season, which culminated with the program’s 11th trip to the College World Series and its third in the last four full seasons. Arkansas is the only team in the country with at least 45 wins in each of the last five full seasons.

In 2021, Hobbs and his pitching staff helped Arkansas win its first SEC overall title since 2004 and its first outright SEC crown since 1999. The Razorbacks became only the second team since the SEC expanded to 30 games to win all 10 of their conference series. Arkansas capped its regular-season SEC championship with the program’s first SEC Tournament championship, becoming only the third SEC team since league play expanded in 2012 to win both the regular season and tournament championship in the same season.

With a stable of arms that featured Kopps, who was selected by the San Diego Padres in the third round of the 2021 MLB Draft, and five more MLB draftees, Hobbs oversaw a Razorback pitching staff that totaled 657 strikeouts, the previous school record, during the historic 50-win season in 2021.

Kopps, who became the second Arkansas player in school history to win the Golden Spikes Award and Dick Howser Trophy, posted a 12-1 record with 11 saves, logging a school-record 0.90 ERA during the year. The right-hander struck out 131, the third-most total in program history, and walked just 18 while allowing only nine earned runs all season. Kopps was named SEC Pitcher of the Year and won nearly every single major award in the sport, including national player of the year praise from D1Baseball, Collegiate Baseball Newspaper and the College Baseball Foundation.

Hobbs also oversaw Patrick Wicklander’s emergence as the Razorbacks’ Friday night starter during the 2021 season. The left-hander made 13 starts and posted a 7-1 record with a 2.09 ERA, the second-lowest earned run average among all SEC pitchers. Wicklander, who earned All-SEC Second Team honors at the year’s end, was drafted by the Tampa Bay Rays in the eighth round of the 2021 MLB Draft.

Kopps and Wicklander were two of six Razorback pitchers selected in the 2021 MLB Draft as Ryan Costeiu (Chicago Cubs, 8th round), Lael Lockhart (Los Angeles Dodgers, 10th round), Caden Monke (Kansas City Royals, 14th round) and Elijah Trest (Colorado Rockies, 19th round) also heard their names called. Arkansas’ six pitchers taken, including four in the draft’s first 10 rounds, was the most the program had ever had selected in the first 20 rounds of the MLB draft.

For Arkansas, it was the second time in program history that it had four pitchers selected in the draft’s first 10 rounds. The Razorbacks also achieved the feat in 2019, Hobbs’ first year as pitching coach, when pitchers Isaiah Campbell (Seattle Mariners, CBB), Matt Cronin (Washington Nationals, 4th round), Jacob Kostyshock (Colorado Rockies, 8th round) and Cody Scroggins (Boston Red Sox, 9th round) all went in the first 10 rounds of the 2019 MLB Draft.

Despite the pandemic-shortened 2020 season, Hobbs’ pitchers were impressive over the first 16 games of the year. The Hogs put together a 3.68 ERA and an 11-5 record with three saves and one shutout. Arkansas racked up 143 strikeouts in 142.0 innings as seven pitchers tallied double-digit strikeout totals, with right-hander Connor Noland leading the way with 19.

Noland went 2-0 with a 2.00 ERA over three starts to lead Arkansas’ starting pitching. Pitcher Zebulon Vermillion was electric out of the bullpen, striking out 12 with only four hits allowed, all singles, in five outings, winning one game and picking up a save in another.

Hobbs helped craft the Razorback pitching staff into one of the top groups in the country in his first year on the job in 2019, led by pitcher Isaiah Campbell. The Razorbacks’ Friday night starter, Campbell put together a 12-1 season and recorded a 2.13 ERA over 118.1 innings, striking out 125 in 18 starts. He was named a consensus All-American for his performance in 2019, earning a first-team nod from the ABCA and second-team honors from five other outlets.

Arkansas’ pitching staff was bookended by Matt Cronin, who played the role of closer and posted 12 saves and a 1-0 record in 25 appearances. He recorded 42 strikeouts over 29.0 innings pitched for a team-best 1.86 ERA. Opponents hit just .165 against Cronin as he racked up five All-America awards, including second-team honors from Baseball America.

A majority of Arkansas’ game two and three starts came from a pair of freshmen in Noland and Wicklander, as the duo combined to start 34 games and appear in 42. The two totaled nine wins and 145 strikeouts, putting together a pair of low 4.00 ERAs as Noland picked up freshman All-America honors from Perfect Game.

The Razorback arms helped propel Arkansas to its second consecutive share of the SEC West behind a 20-10 conference record. The Hogs earned a No. 5 national seed for their postseason run, which featured a clean sweep in the NCAA Fayetteville Regionals and two wins over SEC foe Ole Miss in the NCAA Fayetteville Super Regional. Arkansas’ season culminated with a trip to Omaha, the program’s 10th overall trip to the College World Series.

Four of Arkansas’ pitchers were taken in the 2019 MLB Draft, with Campbell getting selected in the second round by the Mariners. Cronin, Kostyshock and Scroggins were all drafted in the first 10 rounds and signed to pro squads following the 2019 season.

Before Arkansas, Hobbs spent four years at Wake Forest. During his time in Winston-Salem, 12 Demon Deacon pitchers were drafted or signed free-agent contracts in four years (2014-18), including four each following the 2016 and 2017 seasons and three after the 2018 season. In his coaching career, 33 student-athletes have either been drafted or signed pro contracts, including 29 who were undrafted heading into college.

The 2018 Deacon pitching staff set a new program record for strikeouts per nine innings, fanning more than one batter per inning. The Demon Deacons also significantly improved their win totals the first three years under Hobbs, from 27 to 35 to 43, winning the 2017 NCAA Winston-Salem Regional and falling a game short of the College World Series at the Gainesville Super Regional.

The pitching staff excelled down the stretch in 2017, recording a 3.81 ERA, .240 opponent batting average and more than a strikeout per inning against the likes of Florida, West Virginia and UMBC in the NCAA Tournament.

Hobbs oversaw Parker Dunshee’s development as he became a two-time all conference starting pitcher, seventh-round draft pick and Wake Forest’s all-time strikeout record holder. Fellow pitchers Donnie Sellers (11th round), Connor Johnstone (21st round) and Griffin Roberts (29th round – did not sign) were also drafted for the first time in their careers, as Johnstone and Roberts also earned All-ACC honors. Roberts was drafted No. 43 overall the following year, while Rayne Supple (13th round) and Chris Farish (free agent signee) also started their pro careers in 2018.

Before coming to Wake Forest, Hobbs spent four years as the pitching coach at Missouri, which is also his alma mater. During his four years in Columbia, Hobbs had seven of his pitchers drafted in three seasons and guided four players to all conference honors.

In 2013, Missouri’s first year in the SEC, Hobbs helped mentor Zastryzny, who was selected with the second pick of the second round in the draft. Hobbs also helped guide pitcher Keaton Steele to All-SEC First Team honors as Steele was the only player in the nation to lead his team in wins and saves.

The pitching staff in 2013, despite being made up of eight newcomers, ranked among the best in recent Mizzou history with a 3.87 ERA in 50 games. That was the best team mark by a Tiger team since 2006. His three regular starters all had ERAs 3.80 or lower and his staff allowed just 152 walks, which was third in the league.

Hobbs spent the 2010 season as the pitching coach at the University of San Francisco, where his staff ranked fourth in the West Coast Conference in ERA and was second in the league in fewest walks per nine innings. Hobbs turned Kyle Zimmer from a third baseman into a pitcher.

Hobbs’ tutelage and foresight paid off for Zimmer, who was drafted fifth overall by the Kansas City Royals in the 2012 MLB Draft. Before USF, Hobbs spent three years as the associate head coach, pitching coach and recruiting coordinator at UC-San Diego. The Tritons made a trip to the Division II College World Series in 2009. They finished that year ranked No. 3 after claiming the school’s first ever Regional Championship.

Under Hobbs, UCSD’s pitching staff allowed the fewest number of walks per nine innings in D-II in 2009 and ranked 12th nationally with a 3.73 ERA.

Prior to his stint at UC-San Diego, Hobbs spent two seasons as the pitching coach at Santa Barbara City College. In 2006, Hobbs’ staff allowed the fewest walks in the Western State Conference, while the 2005 squad led the WSC with a 2.27 ERA. During the summers, Hobbs was the pitching coach for Foresters Baseball, which won the National Baseball Congress World Series in 2006 after finishing runner-up in 2005. Hobbs also served one season as an assistant coach at Chapman University, where he worked with the pitchers and catchers.

Hobbs and his wife, Marta, have two daughters, Addison and Taylor, and a son, Will.