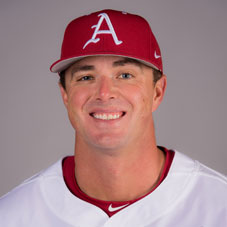 Nate Thompson enters his sixth season as an assistant coach for the Arkansas baseball program in 2023.

Thompson, the Razorbacks’ hitting coach and recruiting coordinator, has helped develop numerous All-America and All-SEC honorees as well as 16 MLB draft selections since joining the program ahead of the 2018 campaign. Under Thompson’s guidance, Heston Kjerstad, selected by the Baltimore Orioles with the second overall pick in the 2020 MLB Draft, became Arkansas’ highest draftee since infielder Jeff King was taken first overall by the Pittsburgh Pirates in 1986.

Arkansas has displayed jaw-dropping power since Thompson began working with the hitters, posting four of the top-five school records for home runs in a season under his watch. Armed with one of the most explosive lineups in the country, Thompson oversaw a Razorback offense that slugged a program-record and nation-leading 109 home runs during the historic 50-win season in 2021.

In 2021, Thompson and the offense helped Arkansas win its first SEC overall title since 2004 and its first outright SEC crown since 1999. The Razorbacks became only the second team since the SEC expanded to 30 games to win all 10 of their conference series. Arkansas capped its regular-season SEC championship with the program’s first SEC Tournament championship, becoming only the third SEC team since league play expanded in 2012 to win both the regular season and tournament championship in the same season.

Six Razorbacks swatted 10 or more homers during the 2021 campaign, led by Robert Moore’s team-high 16 blasts. With Thompson’s guidance, Moore became the first Razorback in program history to earn freshman All-America status in multiple seasons. The switch-hitter, who was eligible as a sophomore due to the shortened 2020 season, was named a freshman All-American by Baseball America in 2021 after earning the distinction from Collegiate Baseball Newspaper in 2020.

Brady Slavens, meanwhile, drove in a team-leading 63 runs during the 2021 campaign, finishing the year as one of three Razorback hitters with 50 or more RBI. Christian Franklin, who was selected by the Chicago Cubs in the fourth round of the 2021 MLB Draft, chipped in 13 home runs and 54 RBI. The trio’s offensive output helped Arkansas top the SEC in five categories: on-base percentage (.387), runs scored (483), homers (109), walks (360), sacrifice flies (36).

Thompson had arguably the best hitter in collegiate baseball in 2020 in Kjerstad, who led the team in seven offensive categories while also leading the SEC in hits (30), total bases (53) and slugging percentage (.791), finishing second in batting average (.448). Kjerstad was recognized as the conference’s best hitter by D1Baseball following the shortened season after entering the year as a unanimous first-team preseason All-American and a member of the USA Baseball Golden Spikes Award preseason watch list.

Arkansas had five starters hit above the team average, with Matt Goodheart leading the way with a .345 clip with 70 hits. Four Hogs recorded 80 or more hits, led by Kjerstad’s 87 hits, including 31 for extra bases with a team-high 17 home runs. Six of Thompson’s hitters landed on All-SEC teams, with Trevor Ezell, Casey Martin, Dominic Fletcher, Kjerstad and Goodheart all earning second-team accolades. Christian Franklin took home freshman All-SEC honors, and Jack Kenley was recognized by D1Baseball as a third-team All-America honoree.

The Razorback bats helped propel Arkansas to its second consecutive share of the SEC West Division behind a 20-10 conference record. The Hogs earned the No. 5 national seed for their postseason run. For the second season in a row under Thompson, Arkansas’ season culminated in Omaha with the program’s 10th overall trip to the College World Series.

Thompson’s first year with the Razorbacks in 2018 was nothing short of extraordinary as he guided one of the best lineups in the nation to a national runner-up finish at the College World Series. Led by a pair of freshman All-Americans in Kjerstad and Martin, Arkansas hit .296, its best for a season since 2010, and hit a then-school record 98 home runs. The home runs tied for third most in the nation as five different Razorbacks notched 10 or more long balls during the season.

Fletcher went on to play for the USA Baseball Collegiate National Team during the summer of 2018. Fletcher is one of five Razorback hitters to don the Red, White and Blue since Thompson arrived in Fayetteville. Kjerstad, Martin and Casey Opitz suited up for the squad in 2019, while Moore played for the team in 2021.

Thompson arrived at Arkansas after spending three seasons at Missouri State. In 2017, his final season at MSU, Thompson helped the program reach the NCAA Super Regionals and win a Missouri Valley Conference championship. The Bears’ offense hit .274 as a team with 80 home runs for the second straight year. With Thompson on staff, Missouri State hit .270 or better in each of his three seasons and averaged just under seven runs per game. In his three years in Springfield, Thompson helped the Bears average a slash line of .287/.391/.453, breaking the school record for walks in 2015 (317) and again in 2017 (351).

Thompson was a key reason for the emergence of All-American Jake Burger, who was taken No. 11 overall by the Chicago White Sox in the 2017 MLB Draft and was the first player in Missouri State history to be selected in the first round. As a junior, Burger led the Bears offensively, hitting .328 with 22 home runs, 65 RBI and a .648 slugging percentage. Burger was named a semifinalist for the Dick Howser Trophy and Golden Spikes Award for the second straight year.

Burger finished his career at MSU with 47 home runs and 241 hits, 11th most in the school’s history. In 2017, he was named a first-team All-American for the third consecutive season, becoming only the second player in MSU history to do so.

Jeremy Eierman, another pupil of Thompson, put together his own All-American season in 2017, being named a first-team All-American by Perfect Game/Rawlings as a shortstop. He hit .313 with 23 home runs and a team-leading 68 RBI. His home runs were good for fifth nationally as he and Burger formed the nation’s top home run hitting duo with 45 combined. Eierman went on to get selected in the 2018 MLB Draft by the Oakland Athletics in the supplemental second round.

During the 2015 season, Thompson’s first at Missouri State, Burger became just the third Bear rookie, along with Mark Bailey (1980) and Bob Blakley (1974), in the 52-year history of the program to be selected for an All-America team (other than an all-freshman squad). Three different position players signed professional contracts at the conclusion of Thompson’s first season with the Bears, including MVC Defensive Player of the Year Joey Hawkins and all-MVC performer Dylan Becker, who signed with the St. Louis Cardinals, as well as first-team all-conference pick Tate Matheny, who agreed to terms with the Boston Red Sox after being selected in the fourth round of the MLB Draft.

Johnson joined the group last year, signing with the Houston Astros after being selected in the 16th round of the 2016 MLB Draft. With Burger being drafted in 2017 and Eierman in 2018, Thompson has been responsible for the three highest draft picks in Missouri State history. Eierman and Burger, as well as Matheny, also each played for the USA Baseball Collegiate National Team during their time at MSU.

Additionally, Thompson’s first full year with MSU produced one of the top recruiting classes in program history. Anchored by a home-grown crop of standouts that included nine players rated among the top 31 high school recruits in the state of Missouri by either Perfect Game USA or Prep Baseball Report, the Bears’ 2015 recruiting class was ranked No. 35 in the nation by Collegiate Baseball. In 2016, Thompson was named the best recruiter in the Missouri Valley Conference by D1Baseball.

Thompson joined the Bears staff in July 2014 as MSU’s lead hitting instructor and recruiting coordinator. An assistant coach at Hutchinson (Kan.) Community College for four years, Thompson filled the vacancy left by the retirement of Brent Thomas after 32 years of continuous service on the Bears’ staff.

Thompson served as Hutchinson’s primary hitting coach from 2011 through the 2014 season, over which time he helped lead the Blue Dragons to a pair of KJCCC West regular-season titles and two of the top five win totals in program history. Hutchinson broke 17 team or individual school records during a 43-17 campaign that saw it rank among the NJCAA’s top 20 nationally in 14 offensive statistical categories.

In 2014 alone, Thompson helped mentor Matt Jones, a 25th round selection of the Los Angeles Dodgers in the 2014 MLB Draft, Jayhawk West Most Valuable Player Jake Schleppenbach and national pitcher of the year Kyle Simonds, who became the first player in Hutchinson history to earn first-team All-America recognition.

Over his four-year stint as an assistant coach in Hutchinson, Thompson helped steer a program that averaged 35 wins per season while posting a .613 winning percentage and producing 23 All-Jayhawk West Division selections, eight of which went on to earn NJCAA All-Region VI honors. In 2012, the Blue Dragons logged a 40-17 ledger, including a Jayhawk West Division crown with a 23-9 conference mark. Led by second-team All-American Tanner Lubach, seven Blue Dragons earned all-conference honors that season, with four players signing to continue their careers at the Division I level.

Thompson spent three seasons at Nebraska as the Cornhuskers’ volunteer assistant prior to his arrival in Hutchinson. In that capacity, he instructed the Husker outfielders and assisted with the infield group, playing key roles in the development of 2008 All-Big 12 performers and MLB draftees Jake Opitz (12th round, Cubs) and Mitch Abeita (19th round, Yankees), as well as future MLB player Cody Asche, who helped Nebraska log an impressive 41-16-1 campaign and earn the right to host an NCAA Regional in Lincoln.

Following the completion of his own collegiate playing career at Dallas Baptist, Thompson began his coaching career as a student assistant with the Patriots. A two-year letterwinner in the DBU outfield, Thompson helped the Patriots claim the 2004 NCCAA national championship after turning in a standout two-year career at Garden City (Kan.) Community College. He was a key figure on the Busters’ 2003 Jayhawk West Division championship team, earning NJCCAA Distinguished Academic All-America honors.

During the 2006 season, Thompson aided a Dallas Baptist coaching staff that included current Patriots head coach Dan Heefner, working with the DBU outfielders while assisting with hitting instruction and the implementation of the club’s strength and conditioning program. The Patriots recorded a .329 team batting mark en route to a 33-23 season and saw a school-record seven players taken in the MLB Draft. From there, Thompson moved into a graduate assistant role at Fort Hays (Kan.) State, where he served as the Tigers’ primary hitting and outfield coach during the 2007 campaign. A pair of Tigers earned ABCA All-Central Region recognition under Thompson’s tutelage as Fort Hays State finished with a 33-20 overall record.

Additionally, Thompson gained experience during the summer of 2007 as an assistant coach with the Mat-Su Miners of the Alaska Baseball League, where he was nominated for the league’s assistant of the year honor. Thompson also served as director of Nebraska’s summer baseball camps from 2008-10, overseeing program development and personnel while assisting with the instruction and skill development phases of the camps.