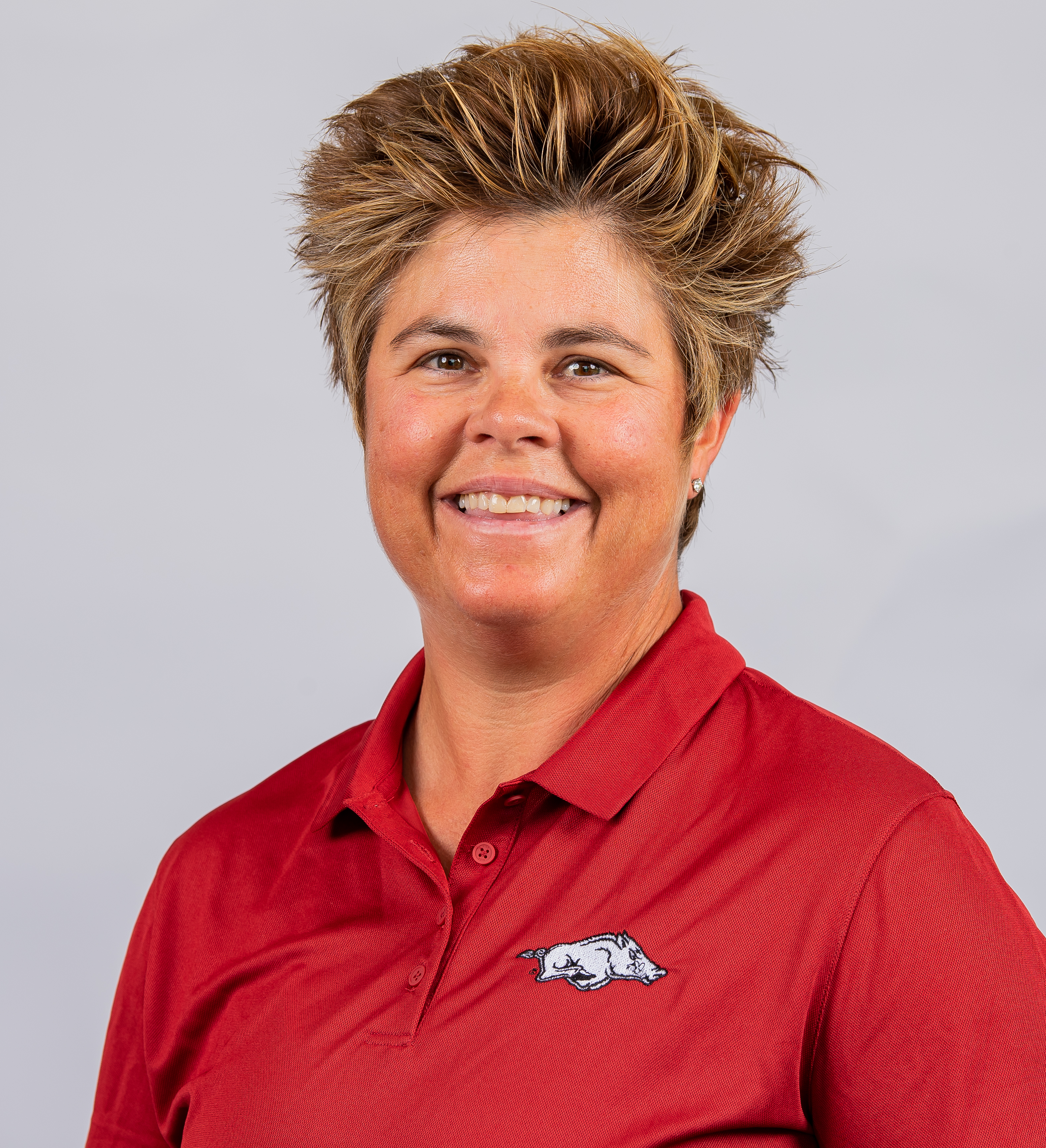 Shauna Taylor was hired as the fourth coach of the Razorback’s Women’s Golf Program back in 2007, and since that moment, she has helped usher in an era of unprecedented success. Her 15-year run at the helm in Fayetteville has seen a program transformed into a national power.

“Arkansas is a special place and I’m excited to lead this program to even greater heights,” Taylor said when hired after five seasons as a Razorback assistant. “This team, community and University are very dear to my heart and I feel fortunate to be a part of this program.”

Those are sentiments she still echoes entering her 16th season at the helm in 2022-23.

The 2021-22 season saw the Hogs extend its streak to 19 straight NCAA Regional appearances, 14 for Taylor at the helm, and the program’s first NCAA Championship bid since 2019. Midway through the fall season, the Hogs were ranked as the No. 1 team in the country after a strong start to the year. The Hogs opened up its second straight season with a tournament win, this time at the Cougar Classic with a 23-under 841, a season-low score. Brooke Matthews shattered the NCAA 54-hole record (by six strokes) at the tournament with an unbelievable 25-under 191. The Hogs followed up their success with another win at their home tournament, the Blessings Collegiate. Arkansas was the only team in the field to finish under par, while Matthews, who earned her LPGA card after the fall season, was the individual medalist the second time in two tournaments.

In 2021-22, Taylor continued to guide a solid group of juniors. Kajal Mistry won her first tournament at the MountainView Collegiate (68-67-71=206) and ended the season with All-SEC First Team and Golfweek All-America Honorable Mention honors. Julia Gregg and Ela Anacona, who with Mistry were WGCA Scholar All-American honorees, led the Hogs both on and off the course as consistent fixtures to the starting five.

Despite having a relatively young squad in 2020-21, Taylor got her Hogs back into the postseason, as the Hogs were selected to the NCAA Louisville Regional as a five seed. Though they would lose in a playoff to No. 1 South Carolina, Taylor kept her regional bid streak alive, as she has advanced in 13 of her 14 seasons, only missing one due to the COVID-19 pandemic. Arkansas had some memorable events under Taylor’s watchful eye, none more impressive than their dominant win at the inaugural Blessings Collegiate Invitational, which featured all 14 SEC teams.

The 2019-20 Hogs, despite having their season cut short due to COVID-19, finished the shortened season ranked 19th in the nation. The 2019-20 Hogs showed just how good they could be under Taylor’s watchful eye on several occasions, nabbing runner-up finishes at two loaded events, capturing second at both the ANNIKA Intercollegiate and the White Sands Invitational.

Taylor’s 2018-19 season may have been her finest work yet, and that is saying something. The 2018-19 Hogs were phenomenal on the golf course, finishing fourth in the nation at the 2019 NCAA Championships, which they hosted on their home course, the Blessings. Taylor also produced her second-ever individual national champion, as Maria Fassi dominated in her last round as a Hog to take home the 2019 NCAA Individual Championship in front of her home crowd.

It wasn’t just on the course that Taylor’s squad dominated, though; the 2018-19 Razorbacks owned a 3.7 GPA as a team, while also leading Arkansas Athletics in Community Engagement.

As the head coach for the Razorbacks, Taylor has coached nine players to 18 All-American honors while coaching 34 All-Southeastern Conference selections. Taylor is especially known for her ability to develop elite talent into elite results, most notably in Stacy Lewis and Fassi, who both were multi-time All-Americans, and Arkansas’ only two individual champions.

Fassi’s 2019 season may have been Taylor’s best showcase for her player development ability. The senior, who nearly left at the semester mark to go play on tour, came back and swept every major award in women’s college golf, including the WGCA Ping Player of the Year, the ANNIKA Award, the Honda Sport Award for Golf and the SEC Female Athlete of the Year award, making her the single-most decorated player in Arkansas Golf History. Fassi, when asked about her decision to come to and continue to play at Arkansas, always identified one thing that made Arkansas different: Taylor’s Presence.

The former Shauna Estes was more than a standout student-athlete at Georgia.  She was part of the winning tradition of some of the best collegiate golfers and teams during her four-year career. A four-time All-American and All-SEC player, Taylor’s honors include 1997 SEC Women’s Golf Freshman of the Year and the 1997 and 2000 SEC Women’s Golf Player of the Year honors.  She is still tied for the most individual wins for the Bulldogs with seven including the 1997 and 1999 SEC title. Taylor finished a personal-best third at the 1999 NCAA Championship and paced the Bulldogs to four top-10 team appearances on the biggest stage for college golf.  Her name remains sprinkled throughout the record books at her alma mater.

As her professional playing career came to a close, Taylor returned to the collegiate ranks in January 2003, becoming Hester’s assistant at Arkansas.  That season, Arkansas returned to the NCAA Regional Championship making the program’s second-ever appearance in the postseason.  It would start a run of 11 consecutive NCAA Regional appearances for the Razorbacks.

Another important development in the life of Taylor and the history of the Razorbacks happened around the same time. The Razorback coaching staff recruited a player from The Woodlands, Texas, named Stacy Lewis.

Lewis had a good junior season but recurring problems with scoliosis (a curvature of the spine) forced the budding star to have back surgery. Despite the seeming career-ending circumstances, the Razorbacks offered and honored their offer to Lewis to come to Arkansas.

Lewis accepted the offer and redshirted her first season with the Razorbacks. It was during this rehab year that Lewis hit the putting green with Estes-Taylor and the duo fine-tuned the short game of the player who would go on to be one of the best to play the game at Arkansas.

Taylor and Lewis formed a bond that remains to this day. Taylor was the assistant coach when Lewis won the 2005 SEC Individual title, earned Freshman of the Year honors and for the 2007 NCAA National Title. It was that season that Taylor earned National Golf Coaches Association Assistant Golf Coach of the Year honors.

“It’s an honor to be recognized by other coaches for doing a good job,” said Taylor said at the time. “I really feel prepared to lead a golf team. My goal from the beginning was to gain the experience necessary to become a head coach. Kelley (Hester) has given me this great opportunity to grow as a person and to develop into a coach. I feel this award is another great stepping stone towards my ultimate goal of becoming a head coach.”

Taylor was inducted into the NGCA Players Hall of Fame in 2009 capping off a successful season at Arkansas. Born in Orangeburg, South Carolina, Taylor was a 2000 graduate of Georgia with a degree in turf grass management. She is married to Adam Taylor of Harrisburg, Illinois, and the couple welcomed their first child, daughter, Grace, in the fall of 2015. Adam Taylor is a sports performance director at the Shoulder Center of Arkansas, and the couple resides in Fayetteville and the family includes daughter, Gracie and dogs, Moe and Hogan.