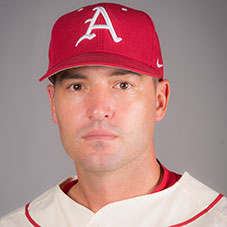 Tony Vitello, considered one of the top recruiters in the country, enters his fourth year as an assistant coach and recruiting coordinator for the University of Arkansas baseball team in 2017.

During his career, Vitello has accomplished a rare feat, mentoring both a National Hitter of the Year and National Pitcher of the Year. Arkansas’ Andrew Benintendi was the nation’s best hitter in 2015 and won the Golden Spikes Award as the nation’s top amateur baseball player after batting .376 with 20 home runs, 57 RBIs and 24 stolen bases.

In 2008, Vitello tutored Missouri’s Aaron Crow who won the Roger Clemens Award that season, given to the nation’s top college pitcher. Crow pitched 43 scoreless innings at one point during the season and had four shutouts. He struck out 127 hitters and won 13 games and became the highest draft pick in Missouri baseball history when he was selected No. 9 overall by the Washington Nationals.

As Arkansas’ recruiting coordinator, Vitello has also done an excellent job signing some of the nation’s top talent. His most recent class, the class of 2016, was ranked No. 6 nationally by Perfect Game and he previously signed the nation’s top class for the Razorbacks in 2014.

In 2016, Vitello helped Arkansas’ offense continue to be one of the best in the SEC and the nation. As a team, the Razorbacks had a combined batting average of .275, which was the second-highest average in the last six seasons. Redshirt sophomores Carson Shaddy and Luke Bonfield each batted over .300 and combined for 16 home runs and 74 RBIs, to lead a team that finished fourth in the SEC in team home runs (49).

Two of Arkansas’ six draftees in the 2016 MLB Draft were pupils of Vitello. Utility player Clark Eagan went in the 9th round to the Pittsburgh Pirates, while shortstop Michael Bernal went to the San Francisco Giants in the 29th round. Eagan batted .298 during his junior season, good for third on the team with 37 runs scored, 67 hits, 7 home runs and 37 RBIs. His hits, home runs and RBI totals were all personal season-highs.

As for Bernal, the El Paso, Texas native finished his Razorback career as one of the best hitting shortstops in the SEC after averaging .274 with a team-leading 8 home runs and 37 RBIs.

He was instrumental in Arkansas’ run to the College World Series in 2015 as the Razorback rebounded from a 15-15 record on April 4 to win 18 of their final 25 regular season games. Primarily working with hitters and serving as the team’s third base coach, the Razorbacks slugged their way into the postseason, finishing fifth in the SEC in hitting (.288) and fourth in home runs (53).

Three hitters signed professional contracts following the 2015 season, including Benintendi who was selected No. 7 overall by the Boston Red Sox. Third baseman Bobby Wernes improved his slugging pecentage by 202 points from the 2014 to 2015 seasons and was selected in the 30th round of the MLB Draft while outfielder Tyler Spoon batted 71 points higher and drove in 17 more runs in 2015. Spoon was picked in the 35th round by the Red Sox.

In his first season at Arkansas in 2014, Vitello made an immediate impact working with the hitters, as the Razorbacks improved their batting average, on base percentage and slugging percentage. Arkansas hitters also saw a boost in total hits, triples, home runs, runs batted in and runs scored.

The offense helped lead Arkansas to its 13th straight NCAA Tournament appearance at the Charlottesville Regional as the Razorbacks advanced to the NCAA Regional Final for the sixth straight season. The 40-win campaign was also the fifth in the last six seasons for Arkansas.

His second full recruiting class at Arkansas garnered national attention, being ranked No. 1 in the country by Perfect Game USA and No. 4 in the land by Baseball America. The class, which will take the field in 2015, featured 20 players, including 14 true freshmen and six junior college transfers.

In his three years at TCU, Vitello brought in some of the top players in the country and helped the Horned Frogs to two NCAA Tournament appearances, including a Super Regional berth in 2012. The Horned Frogs started seven freshmen recruited by Vitello in the super regional at UCLA. His final recruiting class at TCU was ranked 17th in the country and three student-athletes he signed also played for Team USA.

In 2013, 11 newcomers from an 11th-ranked recruiting class saw time on the field for TCU. A pair of Horned Frog freshmen earned freshman All-America honors as Boomer White hit .314 with 27 RBI, while Alex Young was 7-4 with five saves in 22 appearances, 20 in relief. Despite featuring four new faces, TCU’s pitching staff ranked in the top 20 in most pitching categories during the 2013 season.

Vitello’s 2012 recruiting class was ranked in the top 10 nationally by Baseball America, and the group paid immediate dividends for the Horned Frogs as 16 players made their debut during the 2012 season. Freshman Preston Morrison was named the Mountain West Conference Pitcher and Freshman of the Year and was also tabbed a third-team All-American and a freshman All-American.

Despite the team’s youth, the 2012 squad had success on the field, winning the Mountain West Conference regular season and advancing to the super regionals before falling to UCLA. Four Horned Frog hitters earned all-conference accolades and six TCU players were selected in the MLB Draft.

In his first season at TCU in 2011, Vitello worked with a TCU offense that finished the season with a .306 batting average and averaged 6.7 runs per game. The team hit 141 doubles on the season, which ranked fourth all-time in school history. The Horned Frogs finished the season with 43 victories and advanced to the NCAA Regional. Five offensive players earned all-conference honors and four offensive players were selected in the 2011 MLB Draft.

In his eight seasons at Missouri, the Tigers made the postseason seven times. Vitello served as the pitching coach at Missouri, while also working with the team’s hitters and serving as the first base coach. Vitello’s 2008 recruiting class at Missouri was ranked No. 11 nationally by Baseball America and he had top 25 recruiting classes in three of his final four years at Missouri.

In 2009, Kyle Gibson led the Big 12 with 131 strikeouts and ranked second in the league with 11 wins on the season. The 131 strikeouts tied the school record and the 11 wins was second most in Missouri baseball history. Gibson was selected by Minnesota in the first round of the 2009 MLB Draft, joining Aaron Crow as a first-round selection the year before. Gibson finished his career at MU with 28 wins and 304 strikeouts, which both ranked second all-time at Missouri.

Crow, who was first taken ninth in the 2008 MLB Draft, was selected with the 12th overall pick by Kansas City in 2009. In 2008, Crow became the second MU pitcher in four years to be named the Big 12 Pitcher of the Year. Crow, a first-team All-American, was also the recipient of the Clemens Award, which is given to the nation’s top collegiate pitcher. He finished 2008 with a 13-0 record, setting a new school record for wins in a season, and had an ERA of 2.85.

During the 2008 season, Crow had a stretch of 43.0 scoreless innings pitched from Feb. 29 – April 11 that was the fourth longest streak in NCAA history. Another member of the Tigers’ staff, Ian Berger, put together a string of 36.1 scoreless innings pitched from March 9-29. Crow and Gibson each earned All-Big 12 recognition in 2008 and Gibson was a first-team All-Big 12 selection in 2009.

In 2007, the MU pitching staff ranked fourth in the Big 12 with an ERA of 4.25. That staff included an All-Big 12 first-team selection in Crow and a second-team honoree, Rick Zagone. Zagone earned Big 12 and National Pitcher of the Week honors after throwing a near no-hitter against Kansas State.

In 2006, the MU pitching staff recorded seven shutouts and held opponents to two or fewer runs in 19 of the 63 games. In the NCAA Regional, a pair of freshmen, Zagone and Crow, recorded back-to-back complete game victories, each allowing just one run on six hits as Mizzou went on to claim the Malibu Regional Championship.

During the 2005 season, the Tigers had a stretch of 26 innings without allowing a run from March 14-19 after putting together a 23-scoreless-inning stretch earlier that season. One of the most impressive pitching outings in recent history came against Texas Tech in April of 2005, when Missouri recorded the school’s first no-hitter since 1981. In 2006, five Missouri pitchers were taken in the draft with two drafted in the first four rounds.

As recruiting coordinator, Vitello was instrumental in bringing some of the nation’s top prospects to Missouri. The 2008 class was ranked among Collegiate Baseball’s Top-20 recruiting classes and Baseball America voted the class the 11th best nationally.

Following his playing career and the completion of his management degree at MU, Vitello joined the Missouri coaching staff as a volunteer assistant in 2003. He also completed his course work for his master’s degree in business. The following season he was elevated to full-time assistant coach.

Vitello also served as the associate head coach for the Salina Packers of the California Collegiate League in 2002. The Packers finished 50-14 and earned their first trip to the NBC World Series in Wichita, Kansas.

A three-year letterwinner at Missouri, Vitello earned Academic All-Big 12 Conference honors as a senior and was named to the Big 12 Commissioner’s Honor Roll twice.