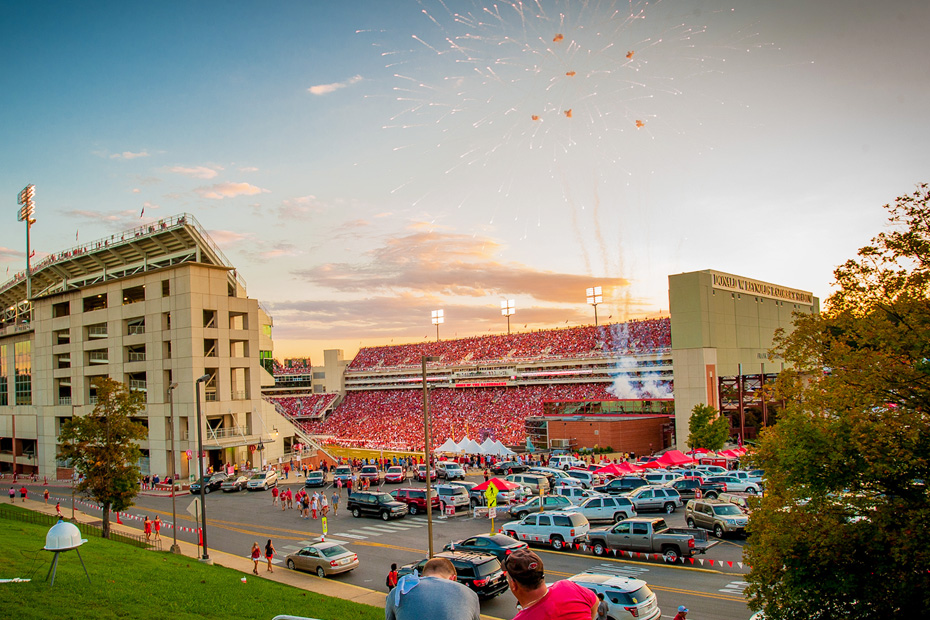 Best Route To The Game?

FAYETTEVILLE, Ark. – As part of a continuing effort to help expedite game vehicular traffic while protecting the safety of pedestrians, Razorback Athletics has partnered with the Fayetteville Police Department and the University of Arkansas Police Department (UAPD) to implement color coded pre-game and post-game traffic routes for Razorback Football games.

The changes are designed to help ease congestion in pre-game traffic while also clearing traffic from around the stadium in a more efficient manner following the game. The color coded routes are designed to provide the most efficient and direct route to and from the stadium for fans based on their parking locations, including preferred routes to access I-49. For convenience of Razorback fans, all parking passes issued by the Razorback Foundation will include the color of the route that is recommended for entry and exit from their designated parking lot.

Orange Route (MLK and I-49) – The orange route is located to the south and west of Donald W. Reynolds Razorback Stadium and services parking lots 1, 47W, 52, 57, 57B, 63, 74, 74A, 74B, 74C and FB. The route includes entry from Martin Luther King Jr. Boulevard to Eastern Avenue and Razorback Road during pre-game traffic flow, while utilizing Eastern Avenue and Martin Luther King Jr. Boulevard in post-game traffic flow. Razorback Road is not an option for post-game.

Green Route (Garland Avenue) – The green route offers the most efficient route to those parking north of the stadium utilizing Garland Avenue as the main entry and exit to I-49. The route is preferred for parking lots 25, 25A, 44 Grass, 44, 44W, 44E, Stadium Parking Deck, Garland Parking Deck, 36, 36B, and 37.

A reminder that free public parking is available for fans at Baum Stadium, located between MLK and 15th street, in both the Baum East and Baum West parking lots. A free shuttle service is provided beginning four hours prior to kickoff. The shuttle service provides trips back to Baum Stadium until all fans are returned to their vehicles after the conclusion of the game.