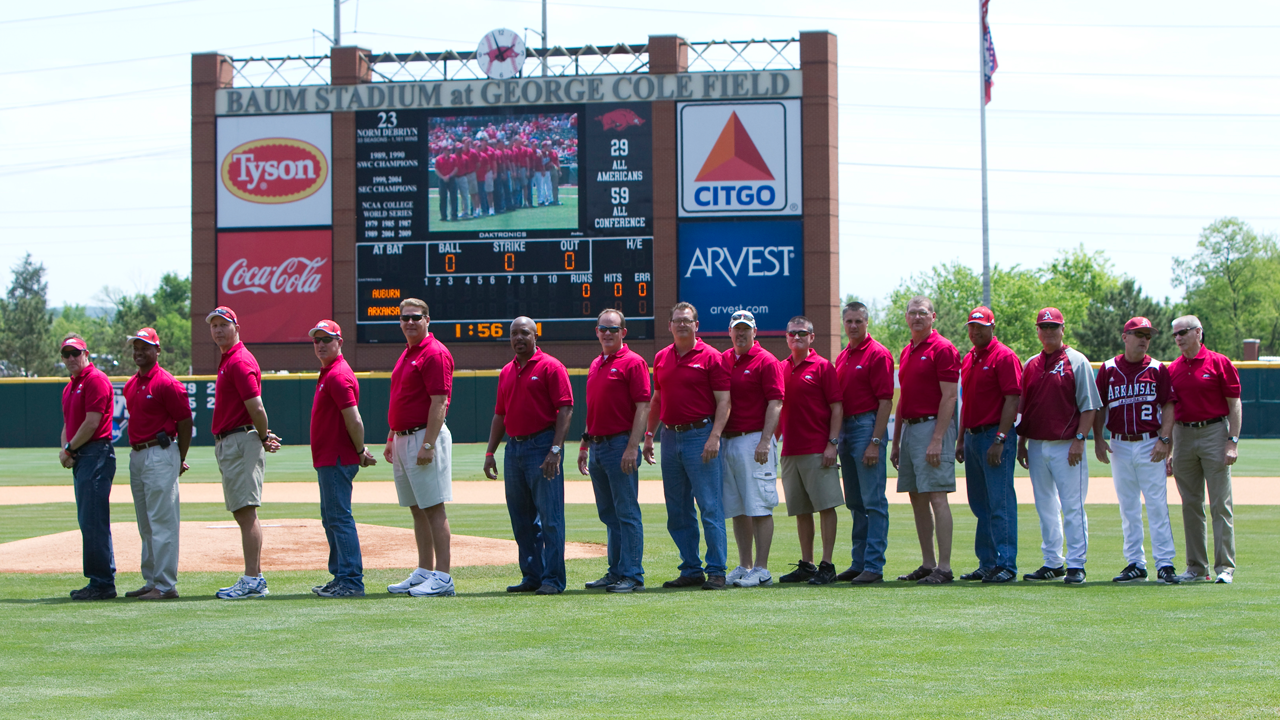 The 1985 season may have started out in one of the worst ways possible, but by season’s end, it turned out to be one of the best in school history.

Arkansas kicked off its season in Coral Gables, Florida, with a sweep at the hands of Miami to begin the year 0-3. The Hogs would only lose three games in-a-row one more time during the 1985 campaign.

The Razorbacks returned home from Florida embarking on a 15-game homestand and won all 15 games, all by at least two runs and nine by five or more. Arkansas did not lose a Southwest Conference series until the last weekend of April and responded to the slide by winning every game in the month of May, a feat still unmatched by any Arkansas team to this day.

Included in May’s historic run was a four-game shellacking of SWC foes in the conference tournament. Held in Fayetteville, Arkansas defeated Louisiana-Lafayette (11-2), Baylor (6-4) and Texas twice (9-5 & 10-6) to claim the program’s first and only conference tournament title.

From there, it was on to the NCAA South II Regional back to the state that was not friendly with the Hogs earlier in the year, Florida, with a trip down to Tallahassee. This time, it would go in Arkansas’ favor. The Hogs rattled off 20 runs in 20-13 victory in the regional opener against Eastern Kentucky, followed by a 13-9 win over George Mason to cruise to the next phase of the weekend. The next two games would be closer, but a 7-6 win over Florida State and a 7-5 victory against Georgia Tech in the finale punched Arkansas’ ticket to Omaha for the second time in club history.

Arkansas arrived at the CWS as the hottest team in the country and played an instant classic in the first game of the tourney, winning a 14-inning affair with South Carolina, 1-0. After a 5-4 loss to Mississippi State three days later, the Razorbacks crushed Stanford, 10-4, in an elimination game.

A win away from the Championship series with rematch against Miami, the Hogs had to go through SWC foe Texas before getting there. Arkansas was 4-1 against the Longhorns in 1985 and built up a 7-0 lead in the CWS matchup; however, Texas battled back to send the game to extra innings, sliding past the Hogs in 10 innings, 8-7, to end Arkansas’ season with a third-place finish. King and outfielder Ralph Kraus would pick up College World Series All-Tournament honors for their performances in Omaha.

The Razorbacks finished with a 51-15 overall record, the most wins in school history, with Norm DeBriyn at the helm, with future head coach Dave Van Horn serving as a graduate assistant.

It would kick off an era of three College World Series appearances in five years, a feat only rivaled by Arkansas’ recent back-to-back trips to Omaha in 2018 & 2019.