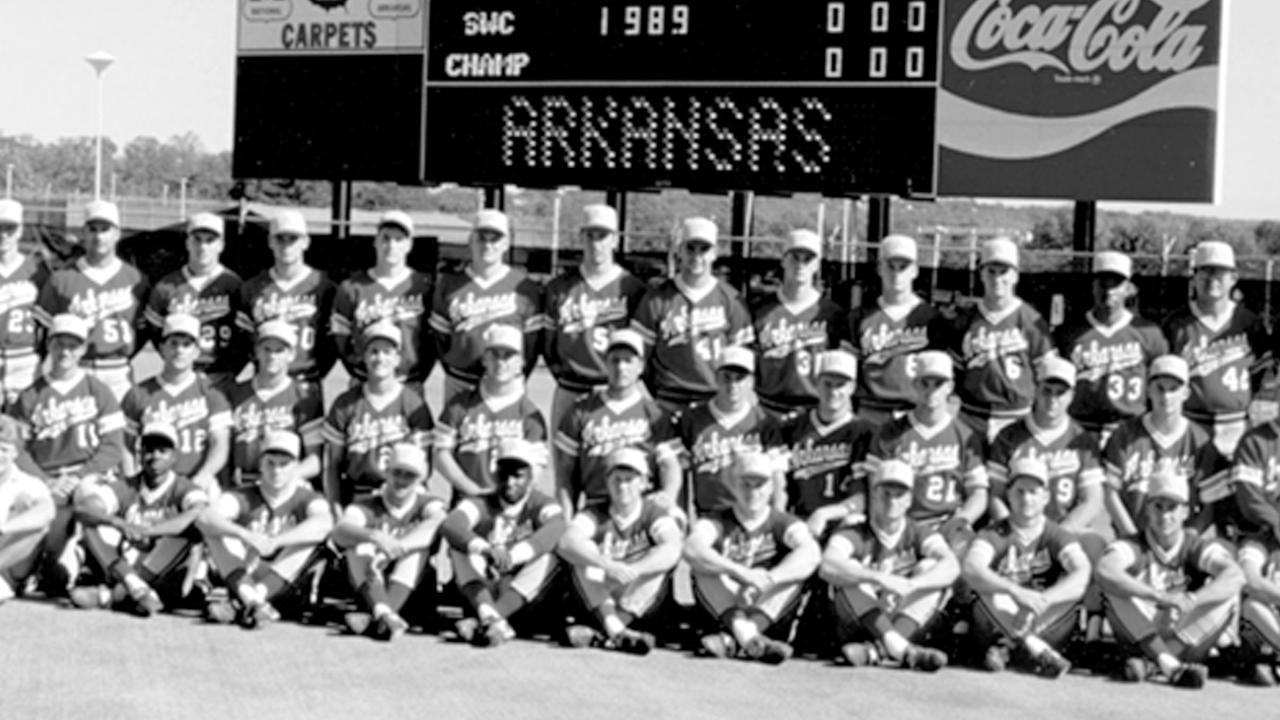 The 1989 season was the culmination of one of the best stretches in Arkansas baseball history, seeing its third College World Series berth in five years.

The Hogs started out 7-0, winning their first five games at home to begin the year, followed by a pair of victories against Kentucky and Penn State in Lakeland, Florida. Arkansas went 4-2 during that trip to the Sunshine State and returned to Fayetteville to win the next nine and 13 of the next 15 games to take a 20-4 record into Southwest Conference play.

A better start to conference action couldn’t have been scripted in 1989, as the Hogs swept each of their first four SWC series against Houston, Texas Tech, TCU and Baylor, dropping only one game during that stretch in a 10-8 midweek battle, improving to 38-5 through April 19.

Arkansas won its next two SWC sets vs. Rice and Texas, finishing the year by winning six of seven conference series, losing only one to wrap up with a 17-4 SWC record, matching the school record for fewest conference losses in a season, tying for first in the SWC.

It was the first of back-to-back SWC titles for the Hogs. Seven Razorbacks landed on the All-SWC teams including current Arkansas broadcasters Bubba Carpenter (1B/OF) and Troy Eklund (OF), along with Greg D’Alexander (3B), Mike Oquist (P), Scott Pose (OF), Phillip Stidham (P) and Mark Swope (P).

Despite a shorter showing at the conference tournament and a tough 7-5 loss to open the NCAA Midwest Regional, the Hogs, with their backs against the wall, shined to win four-straight against George Washington (8-2), Illinois (9-2), Arizona State (1-0) and Le Moyne (6-5) to clinch their fourth trip to Omaha in program history.

Arkansas opened the College World Series with the same opponent it opened the 1989 season in Wichita State; however, the Shockers would pick up a 3-1 win in this matchup. The Hogs rallied to stave off elimination thanks to a 7-3 win over North Carolina two days later for their fourth overall victory in Omaha. Unfortunately, the season would end two days later vs. WSU, giving Arkansas 51 wins for the third time in five years.

Fifteen years would pass before the Hogs made it back to the promised land, this time, a former player and assistant for Norm DeBriyn would succeed him and usher in a new era of Razorback baseball.