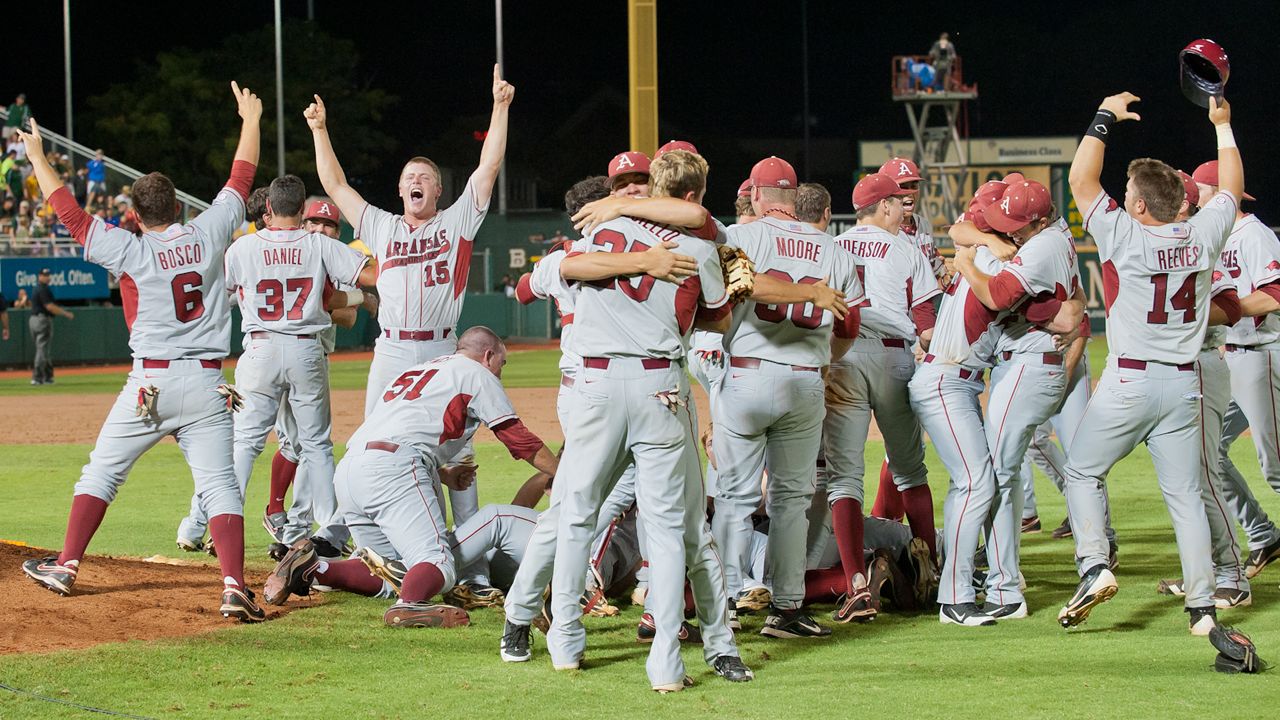 Hog fans didn’t have to wait long to enjoy another summer in Omaha, returning to the College World Series in 2012, three seasons after the previous trip.

For the third time in his Arkansas tenure, head coach Dave Van Horn guided the Razorbacks to Omaha and the College World Series in 2012.

Arkansas had a knack for winning the close games in 2012. The Razorbacks played 32 games decided by one or two runs and went 19-13 in those games. Arkansas was 14-9 in one-run games during the 2012 season and had a streak of seven straight one-run victories late in the season. Six of the Razorbacks’ seven wins in the NCAA Tournament were by one run, including a pair of 1-0 victories.

Van Horn reached a milestone as the Razorback head coach in 2012 as he earned his 400th win at Arkansas during UA’s NCAA Tournament run. Van Horn’s 400th win was a significant one as it came against Rice in the Houston Regional. The 1-0 victory over the eighth-ranked Owls put the Razorbacks in the driver’s seat of the regional, which they would eventually win with a 5-1 win over Sam Houston State.

The Razorbacks put together a memorable postseason run that saw them down old SWC rivals Rice and Baylor on their home fields. Arkansas opened its tournament run in Houston as it defeated Sam Houston State twice and downed eighth-ranked Rice in a 1-0 shutout. The next week, Arkansas returned to the state of Texas and faced No. 4 national seed Baylor.

After dropping the opener of the Super Regional, Arkansas responded by winning the next two games to punch its ticket to Omaha. A scoreless game until the top of the 10th inning, Arkansas broke through on Jake Wise’s RBI single, scoring Brian Anderson. Randall Fant, Nolan Sanburn, Brandon Moore, Trent Daniel and Colby Suggs combined to shut down the high-powered Baylor offense and send Arkansas to Omaha.

In the College World Series, the Razorbacks opened by winning its first two games, defeating Kent State, 8-1, in the opener and then downing South Carolina, 2-1, to snap the Gamecocks’ 22-game NCAA postseason win streak. Arkansas would finish tied for third in the CWS after eventual-runner up South Carolina defeated the Razorbacks twice.

Arkansas finished the season with a 46-22 record, the most wins for UA under Van Horn and the sixth-highest single-season win total in school history. The Razorbacks also won 40 games for the fourth straight season and for the 18th time in program history.

Arkansas wrapped the year ranked in the top six in all four of the major college baseball polls, including a No. 3 national ranking in the USA Today/ESPN Coaches Poll, the NCBWA poll and the Collegiate Baseball poll.