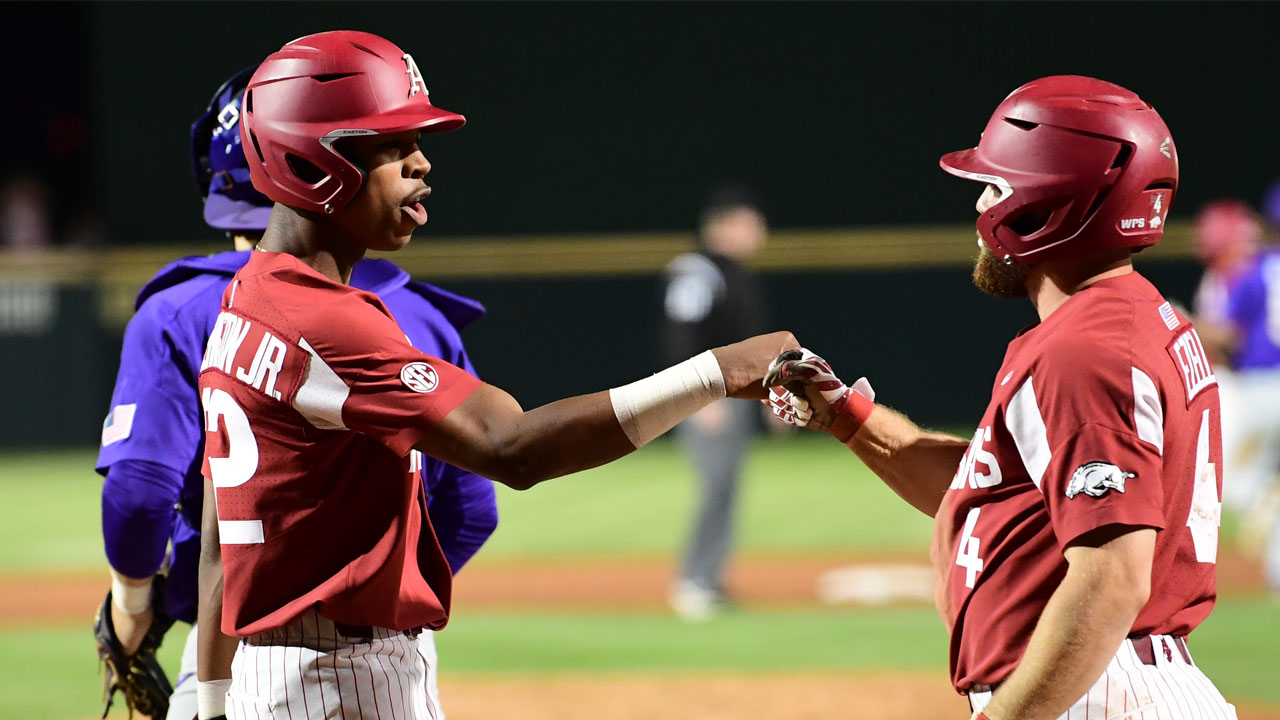 Division Title In Sight As Hogs Finish At Texas A&M

COLLEGE STATION, Texas – The fourth-ranked Arkansas Razorbacks will finish the regular season at 17th-ranked Texas A&M this weekend with a three-game series starting on Thursday at Blue Bell Park. The Hogs have a one-game lead in the SEC Western Division over Mississippi State and have won four-straight conference series.

The Razorbacks (39-13, 19-8 SEC) have won eight of their last 10 games going into Thursday night’s tilt with the Aggies. They’ve also won three of their four road conference series this season and have not lost a series to the Aggies since 2016.

Arkansas continued to roll last week in its home regular-season finale against then-No. 15 LSU, taking two of three from the Tigers for the first time since 2011. The Hogs showed off a high-powered offense against the Tigers, hitting .337 as a team with double-digit run totals coming in the first two games, both victories. The game one victory (14-4) was one for the record books as the 14 runs were the most scored by an Arkansas team against LSU since 2008 and the five home runs hit tied for the most hit in a game this year and second-most in a game in school history.

Much has been made of Arkansas’ offense over the last month and it’s beginning to draw comparisons to last year’s offense that helped the Razorbacks make a run to the College World Series final. This year’s offense is hitting seven points better (.311) through 52 games than the 2018 squad and is slugging 16 points better (.507). The 2019 squad is also scoring runs at a higher clip, averaging 8.1 runs per game, a one-run difference than the 2018 team at this point in the season.

For the fifth-straight week, Arkansas will send Isaiah Campbell and Patrick Wicklander to the mound in games one and two and will leave game three open. Campbell was his usual strong self last week against LSU, going six innings and allowing only two runs on four hits with one walk and four strikeouts. It was his 10th quality start of the year and 12th outing of five innings or more.

Campbell sits at 91 strikeouts for the year, needing nine more to reach the 100-strikeout mark for the season. If Campbell reaches 100 strikeouts, he will be the third Razorback in the last three years to strikeout 100 batters in a season and then ninth Razorback all-time to eclipse the century mark in one year.

Follow Live
This weekend’s series will be televised in front of a national audience on Thursday and Saturday. Game one will be featured on ESPNU, while game three will be on the SEC Network. Tom Hart and Eduardo Perez will call the series opener and finale. The middle game will be online only via SEC Network+.

Phil Elson will have the call as always on the radio for the Razorback Sports Network from Learfield IMG College. Fans can listen to the radio call via the Razorback Gameday app and locally on KQSM 92.1 FM. Pregame coverage begins 30 minutes prior to first pitch. There will also be a live radio link available on ArkansasRazorbacks.com. LISTEN LIVE

Razorback Prime Nine
>> Arkansas completes the 2019 regular-season in College Station, Texas this weekend for a three-game series with the 17th-ranked Texas A&M Aggies before heading to Hoover, Alabama for the 2019 SEC Tournament.

>> Arkansas is coming off its fourth-straight SEC series victory after taking two of three games with No. 15 LSU last week. It was the first series win over the Tigers for Arkansas since 2011.

>> The Razorbacks currently sit at the top of the SEC Western Division with a one-game lead over Mississippi State. At 19-8, the Hogs have tied the record for the most conference wins under Dave Van Horn and need three to tie the school record (22 in 1999).

>> Redshirt junior Isaiah Campbell will take the mound on Thursday night for his 14th start of the year. At 9-1, Campbell is tied for the SEC lead in innings pitched (84.0) and has worked six or more innings in 10 of his last 11 starts with 10 quality outings.

>> The Razorbacks weren’t expected to hit as many home runs as last year’s record-setting team (98), but have still set a good pace going into the last weekend of the year. As a team, Arkansas has hit 70 home runs, which is second-most in the SEC.

>> Dominic Fletcher continues to be a doubles machine going into this weekend’s series with Texas A&M. Sitting at 22 two-baggers for the year, Fletcher is six off the school record and first in the SEC.

>> Catcher Casey Opitz has been a baserunner’s worst nightmare in recent weeks as he caught six would-be base stealers in the last two weeks, five against Kentucky.. Opitz has 19 caught stolen bases this year, which leads the SEC.