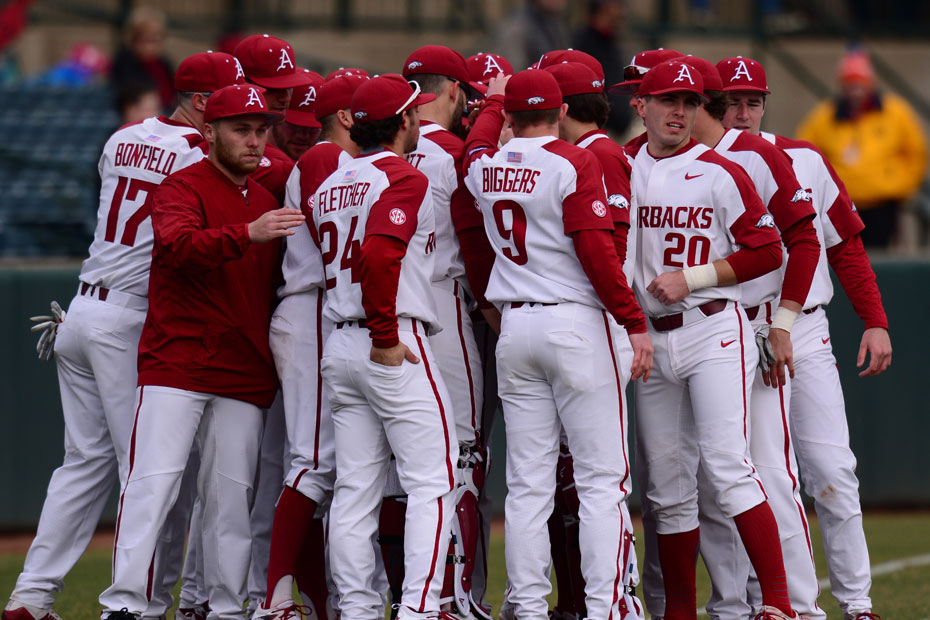 SAN DIEGO, Calif. – The No. 3 Razorback baseball team couldn’t escape a couple of costly errors Friday afternoon as Cal Poly handed Arkansas its first loss of the 2018 season, 4-3, on the first day of the Tony Gwynn Legacy Tournament.

With the Mustangs (2-3) leading 3-1 in the seventh inning, sophomore Dominic Fletcher provided a big two-run home run to tie the game up and, seemingly, give the Hogs (4-1) the momentum it needed for the final innings.

Unfortunately, Cal Poly manufactured the winning run in the top of the ninth as pinch hitter Blake Wagenseller hit a lead-off single and eventually scored after a sacrifice bunt and a two-out single off junior right-hander Jake Reindl.

The Hogs did get another strong start from junior Blaine Knight, who went six innings, allowing just one earned run on five hits and totaling a season-high seven strikeouts on 88 pitches. Combined in his two starts this year, Knight has allowed just five hits, walked two while striking out 11 and letting just one run score. It’s easily his best start to a season in his career as his 0.82 ERA after two starts is expected to be among the SEC’s best at the end of week two.

Offensively, Arkansas struggled on Friday against Cal Poly starter Michael Clark, but was finally able to get to him in the sixth inning, putting two runners on via catcher’s interference and a single. Four of the Razorbacks’ eight hits in the game came against Clark, but they were only able to scratch across one run.

Senior Luke Bonfield delivered the lone extra-base hit off Clark in the fourth inning. He finished the game 2-for-3, his first multi-hit game of the season and extended his hitting streak to five games. Fellow senior Carson Shaddy was the only other Razorback to record more than one hit as he went 2-for-4 with a run scored.

Moments That Mattered
Cal Poly struck first in the second inning by getting an RBI double by catcher Nick Meyer. It would be the most Knight had to labor through an inning as he needed 21 pitches to get out of the frame. For the rest of his outing, he gave up just a lone walk and two singles.

Arkansas tied the game at 1-1 in the fourth as Eric Cole was driven in on a groundout by Heston Kjerstad. Kjerstad finished the game 1-for-4 and has at least one RBI in four of this season’s five games.

In the top half of the seventh inning, relief pitcher Jackson Rutledge replaced Knight and gave up a two-out walk to Scott Ogrin before committing two errors on the same play that led to two more runs for the Mustangs.

After Dylan Doherty hit a slow grounder down the first base line, Rutledge came off the mound to make the play. However, he bobbled the ball on the pickup and then threw it away after the runner had already reached the bag, allowing Ogrin to score. Doherty scored during the next at-bat on a wild pitch from Bryce Bonnin.

Arkansas did respond in the bottom half of the seventh after Shaddy secured his second hit of the day and was driven in on Fletcher’s two-out homer. Fletcher now joins Shaddy as the only two Razorbacks with two home runs this year after coming into the game with just one hit in his last eight at-bats.

Reindl was brought in out of the bullpen to try and keep the game tied over the eighth and ninth innings. Unfortunately, Cal Poly scored the go-ahead run in the ninth inning and Arkansas went down in order in the bottom half of the frame.

Up Next
The Razorbacks will play its second game of the Tony Gwynn Legacy on Saturday against one of the hosts in San Diego State. First pitch is slated for 8 p.m. CT and will be televised on Cox Sports.

All games this week will be televised regionally by Cox Sports and can be heard on the radio on the Razorback Sports Network from IMG.