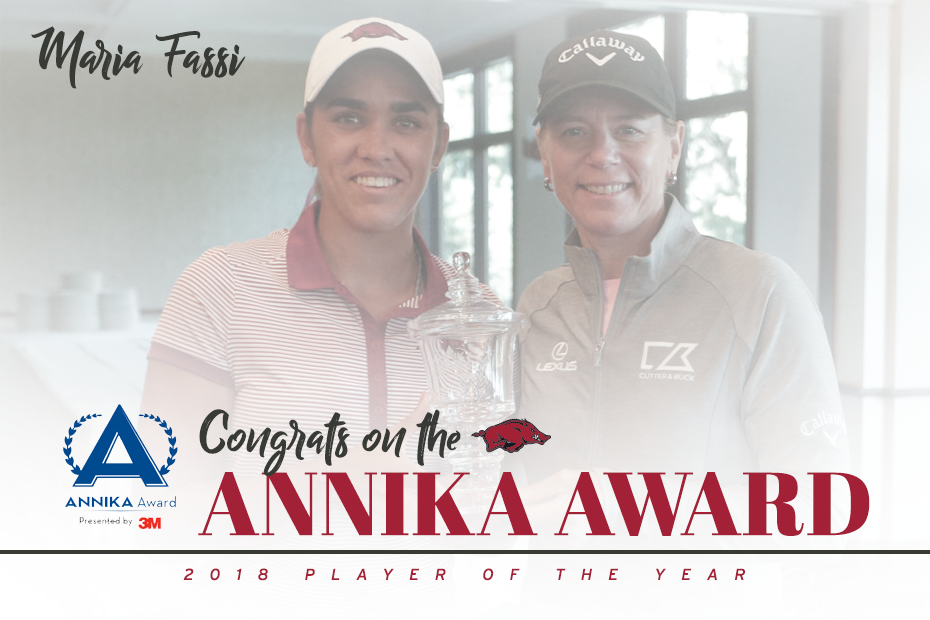 FAYETTEVILLE, Ark. – University of Arkansas junior Maria Fassi capped off a record-setting season earning the honor for top player in Division I women’s college golf on Wednesday with her selection as the 2018 winner of the ANNIKA Award presented by 3M.

The ANNIKA Award presented by 3M is selected by a vote of Division I women’s golfers, coaches and golf media. This is the fifth season for the award and Fassi earns an exemption into the Evian Championship.

Hall-of-Famer Annika Sorenstam was in-studio at the Golf Channel on Wednesday making the final announcement live.

Fassi paced the Razorbacks to one of the best season’s in program history while sprinkling her name all over the Arkansas women’s golf record books.

The Pachuca, Mexico, native began her career with the Razorbacks in January of 2016 after graduating high school early to play the second semester that season. A solid campaign earned her second-team All-America honors after playing in seven events.

Fassi battled through a sophomore slump but came out swinging as a junior. She won six individual titles and tied for the individual title at the SEC Championship, falling in a two-hole playoff. She won the program’s first individual NCAA Regional title and is only the second player in program history to win four or more events in a single season joining former Razorback Stacy Lewis with that distinction.

Fassi leads the Razorbacks with a 70.50 stroke average and has carded a school record 25 rounds of par or better. She has scored 12 rounds in the 60s and counted a season/career-best 64 twice this year. That score is the second-best round in program history.

Some of her other accomplishments include:
• 7 Wins (tied for medalist honors at the SEC Championship but lost on the second hole of the playoff) – 7 is a program record
• Second player in program history to win more than four events in a single season (Stacy Lewis, 6; 2007-08)
• Nine individual titles in her career
• First NCAA Regional medalist in program history