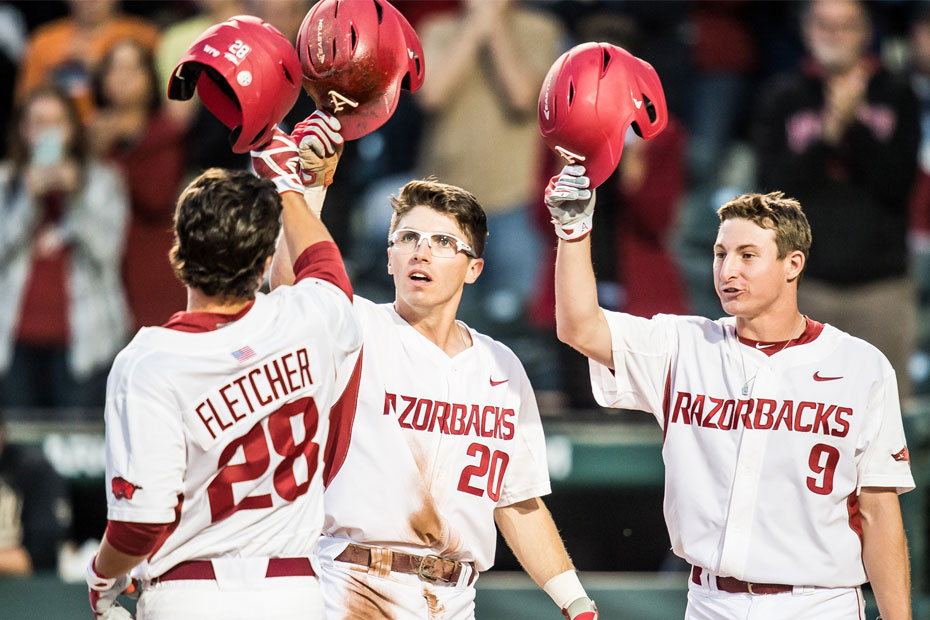 COLLEGE STATION, Texas – The 14th-ranked Razorback baseball team goes into the final series of the 2017 regular season this weekend as it travels to face No. 24 Texas A&M for a three-game set starting on Thursday at 6:30 p.m. at Blue Bell Park.

Arkansas remains well within reach of winning the SEC Western Division as just a game and a half separates it from leader LSU. The Hogs are in the midst of quite the turnaround from a season ago that saw them finish last in the conference with only seven conference wins. Now, Arkansas comes in with 16 conference wins this season and has a chance at its fifth division championship since joining the SEC.

The Hogs are coming off their fifth series victory of the conference season after taking two out of three from Vanderbilt last week. Much of their success came from the pitching staff as junior Trevor Stephan totaled 11 strikeouts in seven innings for the second-straight week. Stephan gets the call again to start game one this week against Texas A&M as he comes in with a team-leading 3.21 ERA and 27 strikeouts over his last three starts.

Offensively, the bats contributed to the series win, as well. Luke Bonfield delivered Arkansas’ fifth walk-off victory of the season when his single in the bottom of the ninth scored Jax Biggers from second base for the game one win.

On Sunday, the Hogs handedly defeated the Commodores, 7-1, with the help of three home runs, one each from Grant Koch, Dominic Fletcher, and Chad Spanberger. Arkansas continues to lead the conference with 66 home runs as a team, while five different players have eight home runs or more. Fletcher has the hot bat as of late as he has four home runs in his last five games and leads all SEC freshman with 10 home runs this year.

Phil Elson, as always, will have the call on the radio via the Razorback Sports Network for all three games.

Hogs Have Chance At Western Division Going Into Final Weekend
With just three games left in the 2017 regular season, the Razorbacks are still in play for the SEC Western Division crown. The Hogs are just a game and a half back of division leader LSU, and a half-game behind Mississippi State. At 16-10 in conference play, the Razorbacks have made a nine-game turnaround from a year ago. With 37 wins on the year, Arkansas is just three away from its ninth 40-win season under Dave Van Horn. The Hogs have won three of their last four series against the Aggies dating back to 2013, including a series win in College Station in 2015.

Biggers Making Splash In First Season
Arkansas sophomore shortstop Jax Biggers was named as one of 13 semifinalists late last week for the 2017 Brooks Wallace Award, which goes to the nation’s top shortstop. The Missouri City, Texas native currently leads all Arkansas players in hitting with a .325 average, good for 15th in the SEC. He also leads the team with a .321 average in conference play with six extra-base hits, nine RBIs, and a .417 slugging percentage. Biggers’ batting average has him well on pace to be the first Razorback shortstop since Scott Hode in 2005 to hit over .300 in a season and he currently has the highest average of any primary shortstop in the SEC.

Taccolini Takes Charge
Making his first appearance in nearly a month, let alone his first start in two months, senior Dominic Taccolini was the Sunday savior last week against Vanderbilt. Even though he only threw 4.2 innings, he still got the victory, giving up just one run on three hits. The Hogs have yet to lose a game that Taccolini has pitched in this season (14 games). He has seven appearances of three innings or more this year and hasn’t given up more than one earned run in eight of his last nine outings.

K-Zorbacks
With the introduction of pitching coach Wes Johnson, the Hog pitchers haven’t been short on strikeouts. Now at 496 strikeouts this year, Arkansas not only leads the SEC, but is fourth in the nation. That total also ties for the seventh-most in a single season in program history.