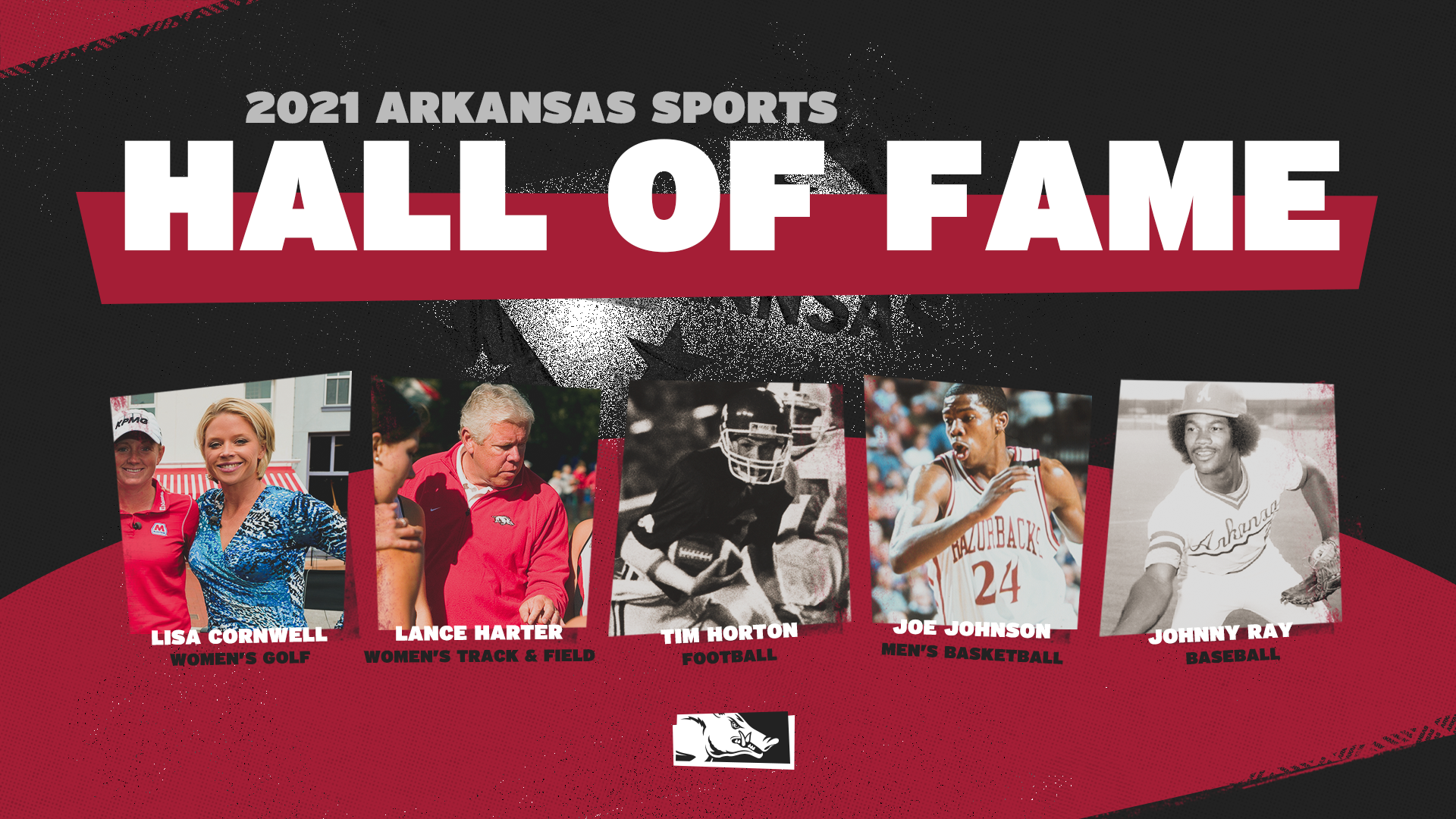 Five Razorbacks Selected for the Arkansas Sports Hall of Fame

They will be formally inducted on April 16, 2021 at the organization’s 63rd annual induction banquet at the Statehouse Convention Center in Little Rock.

In his 31st season as head coach of the Arkansas women’s track and field program, Lance Harter is the most successful coach in UA and SEC women’s cross country and track and field history. Harter was inducted into the USTFCCCA Coaches Hall of Fame in 2014 and is a member of the UA Sports Hall of Honor, Mt. SAC Relays Hall of Fame and Cal Poly Hall of Fame. During his tenure with the Razorbacks, his programs have totaled five NCAA Championships and 39 SEC Championships. In 2019, Arkansas completed a sweep of all three NCAA Championships in a calendar year, becoming only the second women’s program to accomplish the feat and the first since 1986. Prior to the 2019 sweep of NCAA titles, Harter cemented his place in Razorback history in 2015 by winning the NCAA Indoor championship, the first-ever title by a women’s program at UA, and in 2016 won the NCAA Outdoor title. With five national championships, he remains the only coach of a women’s program to win a title. Harter’s programs won 12 consecutive conference titles from the 2014 SEC Outdoor Championships to the 2018 SEC Indoor Championships and became the first program since LSU in 1987-91 to four-peat at the conference outdoor championships in 2017. Current SEC championship streaks for Arkansas include eight consecutive cross country titles and six consecutive indoor championships. Overall, Harter has guided Arkansas to 35 top-10 NCAA finishes (11 cross country, 16 indoor track and eight outdoor) including 22 top-five performances.

Currently a host and reporter for the Golf Channel who hosts a live nightly news show “Golf Central”, Lisa Cornwell started competing in golf at a young age in Fayetteville, Arkansas. She claimed her first AWGA championship at the age of 14, which was a record for the youngest champion ever. Additional honors included being a four-time Arkansas Women’s State Amateur Champion, and three-time American Junior Golf Association All-American. Then in 1992 she was named Arkansas Female Athlete of the Year. With no girls golf team at Fayetteville, she played on the boys high school team. However, she was not allowed to compete for the girls’ state championship. Playing golf on the collegiate level, Cornwell won over 30 tournaments while competing for SMU and Arkansas. From 2007-11 she served as a studio host, reporter, and play-by-play analyst for the Big Ten Network. In 2011, Cornwell founded the show “SEC Press Pass” and hosted it through 2013. In her current role with the Golf Channel, she also reports live at tournaments on the PGA Tour, LPGA and PGA Tour Champions, while serving as host for the NCAA Championships as well as instructional shows for Golf Channel Academy.

A four-year letter winner at Arkansas, Tim Horton started as a split end and punt returner from 1987-89, Serving a team captain in his senior season, Horton earned second-team All-SWC honors after hauling in 23 catches for 453 yards and serving as the team’s top punt returner. During his career as a Razorback, Arkansas compiled a 38-11 record, won consecutive SWC titles (1988-89) and appeared in four straight bowl games. As an assistant coach with the Razorbacks, Horton was the recruiting coordinator and running backs coach. He was one of just two coaches in the nation to coach four different 1,000-yard rushers from 2007-10, including 2007 Doak Walker Award winner Darren McFadden and All-American Felix Jones. Over his coaching career, Horton has coached in 13 bowl games, including the 2013 national championship game. Starting in 2013, Horton served as Auburn’s running backs coach and was the Tigers’ recruiting coordinator in 2015-16. As of 2020, Horton has spent two years as the running backs coach at Vanderbilt University.

An 18-year veteran in the NBA, Joe Johnson started his career playing high school basketball at Little Rock Central and then became a Razorback. During his freshman season in 1999-2000 he led Arkansas to the 2000 SEC Men’s Basketball Tournament championship while being named to the SEC All-Freshman team and SEC All-Tournament team. As a sophomore in 2000-01, Johnson was named to the All-SEC second team and SEC All-Tournament team, while also receiving honorable mention All-American honors. Johnson declared for the 2001 NBA draft after his sophomore season and was selected 10th overall by the Boston Celtics. Johnson became a seven-time NBA All-Star during a playing career which included playing with the Phoenix Suns, Atlanta Hawks, Brooklyn Nets, Miami Heat and Utah Jazz. He also represented the United States national team. While playing for the Atlanta Hawks, Johnson earned the nickname “Iso Joe” for his skills on isolation plays.

A former two-time All-Southwest Conference second baseman with the Razorbacks, Johnny Ray helped Arkansas to a runner-up finish at the 1979 College World Series before enjoying a 10-year MLB career. Despite never playing the Southeastern Conference, Ray was selected as one of four SEC Baseball Legends in 2019. A junior college transfer into Arkansas, Ray hit .319 over his two seasons with the Razorbacks and led the team in hits and runs scored each year while also leading with 47 RBIs as a senior in 1979. Selected in the 12th round of the 1979 MLB draft by the Houston Astros, Ray spent just a couple of years in the minors before breaking into the big leagues with the Pittsburgh Pirates. Named the 1982 Rookie of the Year by The Sporting News and finished second behind Steve Sax in voting by the BWAA. The following season he won the Silver Slugger Award as the top hitting second baseman in the National League. His lone All-Star Game appearance came in 1988 as a member of the California Angels, when he hit .306 and posted career highs in doubles (42) and RBIs (83). Ray ended his career with 1,502 hits – including 294 doubles, 36 triples and 53 home runs – to give him a .290 career batting average. Ray also totaled 594 RBIs and posted a career fielding percentage of .982, which ranks 81st among second basemen in MLB history.