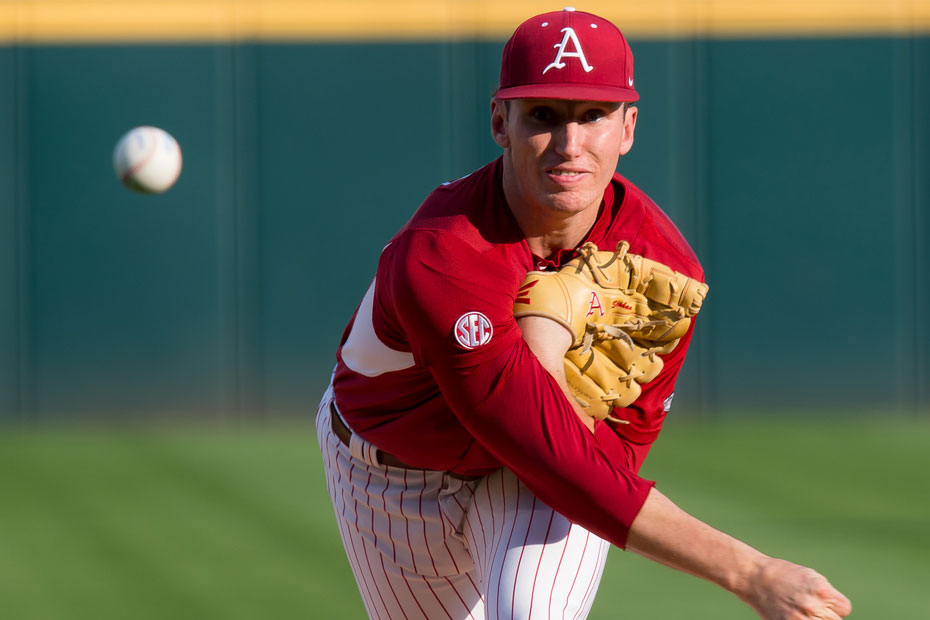 KNOXVILLE, Tenn. – Freshman Dominic Fletcher’s solo home run in the fifth inning was all Arkansas needed to split a double-header with Tennessee Saturday afternoon. His homer coupled with a great performance on the mound by junior Trevor Stephan gave Arkansas the 2-0 victory in seven innings over the Volunteers, its 14th conference win of the year.

Stephan was locked in from first pitch striking out the side in the first and third innings. He ended up tallying 11 strikeouts over a complete seven innings, his third outing of 10 or more strikeouts this season, joining Blaine Knight with three outings of 10+ strikeouts this year. It’s also the first complete game shutout by a Razorback pitcher this year and first since Zach Jackson pitched a complete game shutout in seven innings at Kentucky on April 23, 2016.

As for Fletcher, the freshman was nearly unstoppable at the plate in both games of the double-header, going 5-for-7 at the plate with two home runs on the day. He now has eight homers on the year, which leads all freshmen in the SEC.

The victory for the Hogs is key for them to stay in the hunt for the SEC Western Division as their 14 conference wins keeps them just a game and a half back of leader Mississippi State and just a half game behind second-place Auburn.

A fielding error by Chad Spanberger in the sixth inning allowed the go-ahead runs to score for Tennessee and ended up being the difference as the Volunteers won the recently suspended game, 5-4 in nine innings.

The lead changed hands three times with Arkansas holding the advantage on two separate occasions. However, once starting pitcher Blaine Knight was taken out of the game, sophomore Jake Reindl was brought in to try and continue the success that Knight had going. Two runners reached for Tennessee before the one-out error allowed the two runs to come home unearned.

Fletcher provided much of the offense for the Hogs after going 3-for-4, including a home run in the sixth. At the time, his homer put the Hogs ahead 4-3, but was the last time Arkansas could push a run across over the final four innings.

The three-hit game breaks Fletcher out of a 2-for-15 (.133) slump he had coming in dating back to the second game of the Auburn series (April 22). It was also his first home run since March 26 against Missouri.

The series opener began on Thursday before the rains moved through the Knoxville area all Thursday night and through Friday. The game finally resumed Saturday morning at 9 a.m. CT, more than 36 hours after it was suspended.

Arkansas had the early 1-0 lead thanks to the base-running of Jared Gates on Thursday after he reached on a one-out single. He, then, moved around the bases on a wild pitch and a failed pick off by Tennessee pitcher Hunter Martin before scoring on, yet, another wild pitch.

Upon resuming the game two days later, neither team made a change to its lineup, including bringing back both starting pitchers. After a hitless first inning Thursday, Knight returned to the mound for the Razorbacks, but had trouble early on. Three runs scored for the Volunteers in the second inning off Knight, two from a double by Jeff Moberg.

Knight was able to settle in, however, retiring nine of the final 10 batters he faced over the third through fifth innings and the Hog offense did its job to tie the game with two runs in the fifth and re-take the lead with a lone run in the sixth.

It ended up being a good five innings of work for Knight, allowing just three runs, all in the second inning. It was his second straight start of five innings or more, but he wound up with the no-decision after the bullpen couldn’t hold the one-run lead in the sixth.

After fighting through the rain over three straight days, the Hogs and Vols finally caught a break in the second game of the double-header Saturday as the weather finally subsided for the first time all weekend.

Stephan did everything he could to make sure the Hogs got a quality outing from its starting pitching, especially with the good weather. The seven innings was the junior’s longest outing since going seven strong against LSU back on April 8, where he only gave up two runs on five hits, while striking out seven.

The shutout with one hit allowed and 11 strikeouts marked his best overall outing since going 8.1 innings against Rhode Island on March 10, where he struck out 13 batters and only gave up two hits.

Only four batters combined between both teams reached base in the first four innings. However, Fletcher changed all of that with his monstrous home run over the right field wall in the fifth to light up the scoreboard and give the Razorbacks the 1-0 lead.

Arkansas got an insurance run in the top of the seventh after Carson Shaddy doubled to lead off the inning. He was later brought around to score on an Eric Cole single up the middle. It was Cole’s only hit of the game and Shaddy finished 2-for-3 with a run scored.

Up Next
Arkansas gets back to Baum Stadium next week for its final regular-season series of the 2017 season when it welcomes Vanderbilt for a three-game set starting on Friday, May 12 at 6 p.m. on the SEC Network. It will be Senior Weekend for Razorback seniors Alex Gosser, Josh Alberius, Dominic Taccolini, Jake Arledge, and Cannon Chadwick. All seniors will be honored prior to the series finale on May 14.