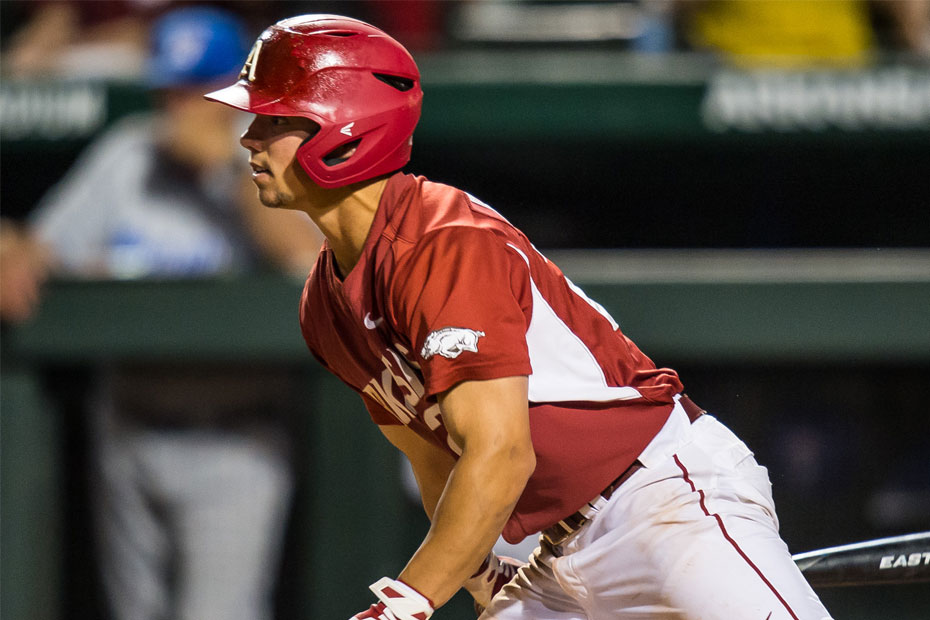 FAYETTEVILLE, Ark. – 14th-ranked Arkansas tied a season-high with 16 runs scored Tuesday night to power past Memphis, 16-7, at Baum Stadium. Freshman Dominic Fletcher nearly hit for the cycle in the game as he hit a single, double, and a triple in his first three at-bats. He was one of four Razorbacks with multi-hit performances in the game.

The win moves the Hogs record to 30-8 for the season, the fastest to 30 wins by any team in the SEC, and is their 10th-straight midweek win. Arkansas remains a perfect 13-0 when scoring 10 or more runs in a game this year.

Fletcher’s performance at the plate was nearly one for the ages as he locked up everything but the home run for the cycle by the fifth inning. Had he hit the home run, it would have been the first cycle by a Razorback since Kyle Harris did it in 1994 against Tennessee.

On the mound, freshman Matt Cronin earned his second victory after throwing 1.1 scoreless innings at the end of the fifth and through the sixth. Arkansas had retaken its second lead of the game in the bottom of the fifth after Cronin entered the game, scoring four runs on six hits.

It was the last lead change of the game as Arkansas took a 11-7 lead into the sixth and scored five more runs in the bottom half of the sixth on just three hits, to make it 16-7 for the final three innings.

Moments That Mattered
Memphis got a three-run first inning off a Andy Bowman home run to take a 3-0 lead, but the Razorbacks responded in a big way with seven runs over the second and third innings. A Jake Arledge two-RBI double got the scoring started for the Hogs. He later scored on a Chad Spanberger groundout to tie the game at 3-3.

Arledge finished the game with two hits and three runs scored. Both of his RBIs in the game came from the double in the second inning. In 11 of his last 12 games, Arledge has at least one hit.

The lead was padded in the third when the Hogs took advantage of three straight walks to Jared Gates, Carson Shaddy, and Eric Cole before Fletcher cleared the bases with his first triple of his career down the right field line, making it 7-3.

Fletcher now has nine multi-hit games this season and three with three hits or more. It’s his first game with two or more hits since going 2-for-3 against Alabama on April 2.

Memphis did tie the game for a second time by putting up a four spot in the top half of the fifth, getting a lead-off home run from Tyler Webb and then scoring three on a double down the right field line by Zach Schritenthal with two outs. Cronin was brought in to stop the rally and he did exactly that, striking out Jason Santana to end the fifth and then going 1-2-3 in the sixth.

Razorback Quotables
“I think all of our hitters did a good job, for the most part. They were really battling and getting deep into their at-bats and getting pitch counts up.” – Head coach Dave Van Horn on the team’s approach at the plate

“They feed off of each other, confidence-wise. They feel confident at the plate. They feel like we have a good line-up that compliments each other. They know that, to stay in the lineup, they’ve got to produce, and they’ve been doing a great job.” – Head coach Dave Van Horn on his team’s dynamic

“Any time you’re in the box with runners in scoring position, you’re just trying to get the job done for the team and I happened to be lucky enough to get those two hits tonight.” – Dominic Fletcher on producing RBIs at key points in the game

“I feel like our team does a really good job of responding to big innings when other teams put up big runs on us, especially early in the game. We’re able to respond and we’re able to look at a lot of our games. The Friday night game against Mississippi State, as well as others, I think our team is very mature in its approach.” – Luke Bonfield on the team being able to respond to deficits

Up Next
Arkansas heads to North Little Rock, Arkansas for its annual game at Dickey-Stephens Park on Wednesday. The Hogs will face the Memphis Tigers for the second game of this midweek series with first pitch scheduled for 6:30 p.m. There will be no television coverage of the game, but it can be heard on the radio on the Razorback Sports Network with Phil Elson calling the action.