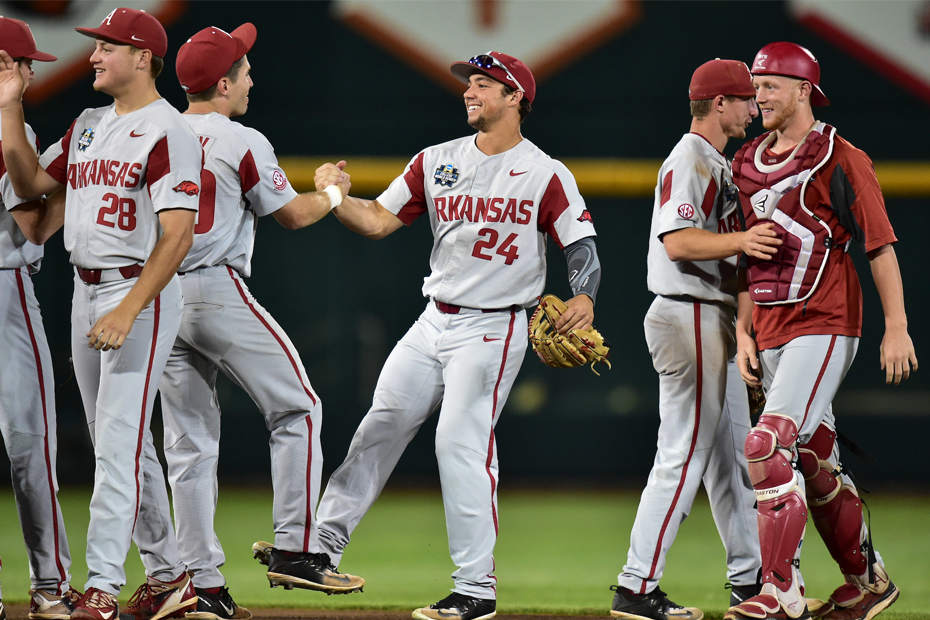 Headed to the CWS Finals

OMAHA, Neb. – For the second time in program history and first time since 1979, the University of Arkansas baseball team is headed to the College World Series finals with Friday’s 5-2 victory over top-ranked Florida. On his way to the win, redshirt sophomore Isaiah Campbel tied a career high with eight strikeouts in 5.1 innings while freshman Casey Martin posted four hits, three runs and an RBI.

With the win, Arkansas improves to 47-19 this season and advances to the championship series which begins Monday at 6 p.m. (CT) on ESPN. The Razorbacks await the winner of the Oregon State-Mississippi State matchup which will be settled Saturday at TD Ameritrade Park.

The Big Inning
Holding on two-run lead through four innings, the Razorbacks scored a pair of runs in the top of the fifth to push its advantage to 4-0. Once again, Martin started the rally with a double to lead off the inning and after a groundout by Heston Kjerstad, he came around to score on an RBI groundout by senior Luke Bonfield. With two down, sophomore Dominic Fletcher added a solo shot for his 10th home run and Arkansas’ 98th big fly of the year.

The Hitting
Arkansas had 11 hits Friday, good for the team’s eighth double-digit performance in nine NCAA Tournament games. Along with Martin, the Razorbacks got multi-hit efforts from Bonfield, Fletcher and Jax Biggers. With his four-hit showing, Martin has at least two in six-straight games and eight of the past nine. The freshman infielder is hitting .571 (8-for-14) during the College World Series.

The Pitching
Making his 16th start of the season, Campbell held Florida without a hit through the first four innings before the No. 1 national seed got on the board with a pair of two-out runs. Campbell got out of the jam with his eighth strikeout, establishing a new program high for strikeouts in a College World Series game. The previous mark of seven was held by Drew Smyly against Virginia in 2009. Sophomore Matt Cronin recorded the final six outs of the game for his 13th save of the year which ties the single-season mark set by Colby Suggs in 2013.

Early Advantage
With the help of a RBI single by Bonfield, the Razorbacks scored in the first inning for a fourth-consecutive game. The Skillman, N.J., native drove in Martin with a base knock to center on the 10th pitch of his at-bat against Florida starter Brady Singer. Arkansas is now 24-3 this season when scoring in the first inning and 32-8 overall when scoring first.

Game Note
Friday’s game was the fifth meeting of the season between Arkansas and Florida and first between the two programs in the College World Series. Friday’s win evens the all-time series at 32 wins apiece.