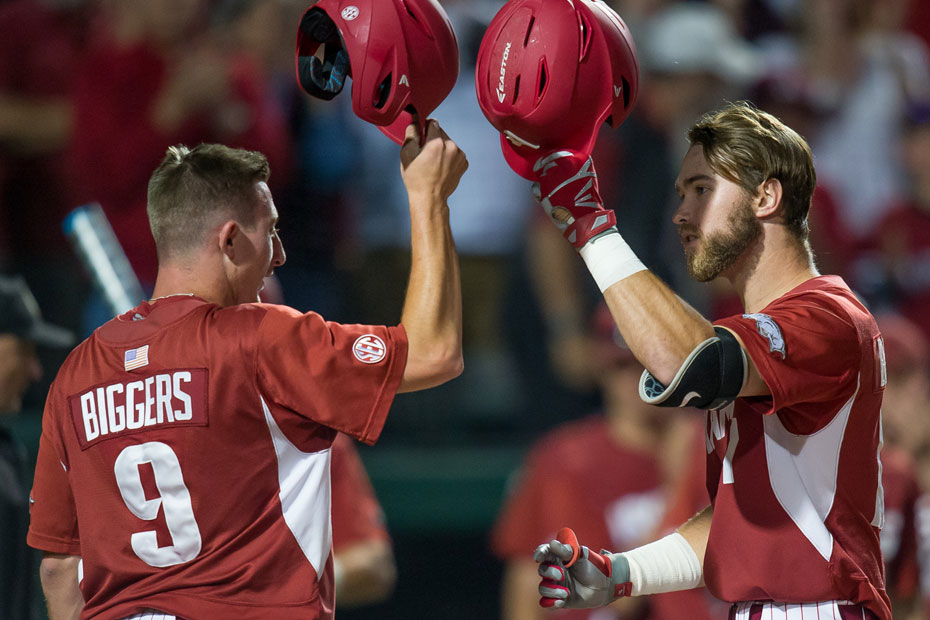 Hogs Back At Baum For Premier Series With Rebels

FAYETTEVILLE, Ark. – As winners of eight of their last 10 on their home turf, the 14th-ranked Razorbacks are back at Baum Stadium this weekend for a three-game series against SEC Western Division rival, Ole Miss. First pitch for game one on Thursday is slated for 6 p.m. and will be televised on the SEC Network.

The Hogs are coming off a tough series loss at Auburn last weekend, but still remain well in the hunt for the division as Arkansas, Auburn, and Mississippi State are each within a game of each other. The Razorbacks continue to hold the best overall record in the Southeastern Conference at 33-10 and are tied for the second-best conference record at 12-6.

It’s been one of the better starts in conference play for Arkansas in recent years, winning four of its first six league series for the third time in the last five seasons. Even with the series loss at Auburn, the Hogs bounced back in a big way Tuesday night, winning in walk-off fashion over Kansas State, 6-5 in 10 innings, at Kauffman Stadium in Kansas City, Missouri.

Much of Arkansas’ success has been because of its starting pitching tandem of Blaine Knight and Trevor Stephan. Even though last week’s outings were not their best statistically, the two are still among the best in the SEC. Combined, Knight and Stephan have amounted for 10 wins in 20 starts and have struck out 126 batters in 104.2 innings, while walking only 21, among the lowest in the SEC.

The offense has been key also as four of the hitters in Arkansas’ lineup are averaging well over .300 in conference play. Eric Cole (.364), Jax Biggers (.356), Chad Spanberger (.350), and Luke Bonfield (.338) have each totaled four or more multi-hit games over the previous three conference series. Cole leads all players with five, including his first career four-hit game back on April 14 against Georgia.

Follow Live
Thursday and Friday’s first two games of the series will be televised on the SEC Network with Dave Neal (PXP) and Mike Rooney (Analyst) calling the action. Game three on Saturday will be online only via SEC Network+ on the Watch ESPN app and WatchESPN.com. Alex Perlman (PXP) and Troy Eklund (Analyst) will call that game.

Phil Elson and Rick Schaeffer will have the radio call as always on the Razorback Sports Network.

Evan Lee Does It All
Two-way player Evan Lee proved just how versatile he could be Tuesday night against Kansas State when he drove in three of Arkansas’ six runs in its 6-5, 10-inning victory. Lee pinch hit for Jake Arledge in the fifth, driving in two. It was his fourth time this season to pinch-hit and he had drawn walks each time before. On April 14, Lee scored the walk-off run against Georgia after pinch hitting in the ninth. For the year, Lee boasts a .361 batting average and a 4.26 ERA on the mound.

Hogs Put On Show For Home Crowd
Having the best overall record in the league, the Razorbacks have played particularly well inside the friendly confines of Baum Stadium. Having a 24-3 record at home this year, including series sweeps against Mississippi State and Georgia, Arkansas has the best home record of any team in the SEC.

Rankings Check
Arkansas held steady in the national rankings this week even with a series loss to now top-five Auburn. The Hogs are as high as No. 10 in the Collegiate Baseball Magazine poll and No. 14 in both the Perfect Game and USA Today/Coaches’ Poll. In the important Ratings Percentage Index (RPI), the Razorbacks moved up to No. 12 in the nation, the third-highest SEC team. Ole Miss is not ranked in any poll this week.