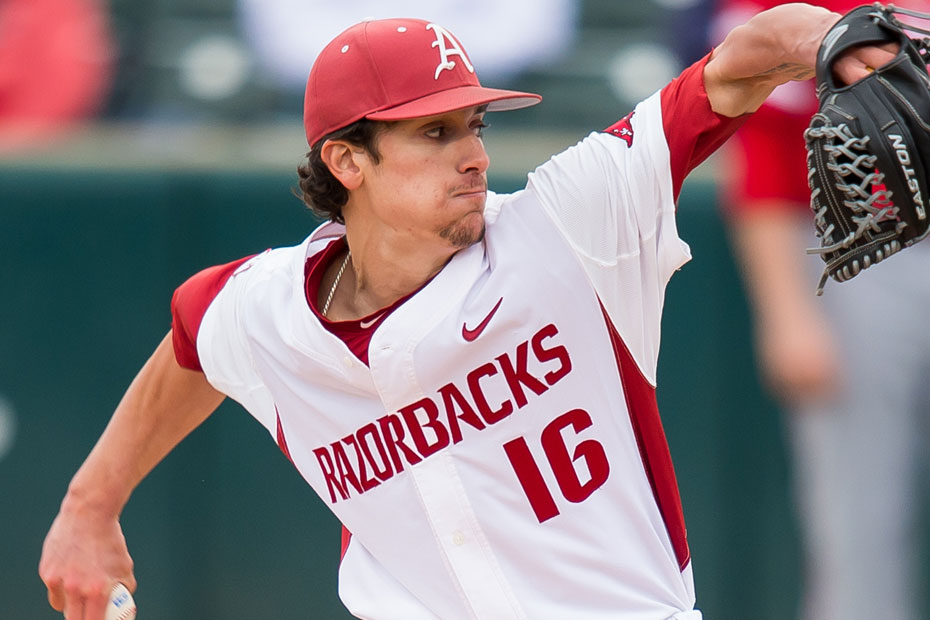 COLUMBIA, Mo. – Sophomore pitcher Blaine Knight and the 24th-ranked Razorbacks had to battle through a two-hour rain delay in the fourth inning Friday afternoon at Taylor Stadium, but still had a big five-run second inning before the stoppage and ended up defeating the 18th-ranked Missouri Tigers, 9-2, to open the three-game series.

Friday’s game was originally scheduled for a 6:30 p.m. start, but with impending weather, it was moved up to a noon start. Knight was sharp into the fourth inning, not allowing a run before the lightning and rain forced both teams off the field. After a two-hour wait, play was resumed and Knight returned to the mound.

Unlike his counterpart, Tanner Houck, who did not return to the game after the delay, Knight pitched three more innings after having to wait over two hours. Missouri did get two runs off of him in the fourth and fifth innings, but he finished with six innings pitched and struck out seven batters for his third win of the year. In three of his last four starts, Knight has struck out at least seven batters and has thrown six or more innings.

Six different Razorbacks finished with multi-hit games. Junior Chad Spanberger comes away with the most impressive line as he goes 2-for-5 with a run scored and three RBIs. Junior Carson Shaddy notched his sixth multi-hit game with a double and a triple, two of 14 hits for the Hogs on Friday.

Moments That Mattered
Arkansas got on top of Houck early before the weather delay, scoring five runs on four hits in the second inning. The Hogs put its first two batters on base to start the frame, but suffered two quick outs before being able to bring a run home.

Jax Biggers followed with a big walk to load the bases after working back from an 0-2 count. Then, Jake Arledge was hit by a pitch to bring in the game’s first run. From there, four more runs came across, three off hits and one off an error to build Arkansas’ lead to 5-0.

The Razorbacks’ approach with two outs was something to behold on Friday. Of the nine runs scored by Arkansas in the game, eight were brought in with two outs. The Hogs hit 9-for-17 (.529) with two away in the game and its’ only run with less than two outs came in the top of the ninth after Shaddy scored on an Eric Cole groundout.

With the big five-run lead after just two innings, Knight continued to baffle Tiger hitters through the third inning. Before the top of the fourth was finished, both teams were pulled off of the field due to a lightning strike in the area. The rain came shortly thereafter and both teams had to wait it out for over two hours.

Once the weather broke, Arkansas finished its top half of the fourth and Knight returned to pitch the bottom half. Knight only had three strikeouts before the delay, but went on to add four more to his total and only allow three baserunners for his final three innings.

Senior Dominic Taccolini came on to pitch in the seventh and finished the game with only two hits allowed along with four strikeouts to corral his second save of the year.

Razorback Quotables
“We were pretty consistent all the way through. We didn’t make many mistakes in the field. Offensively, we did a great job getting two-out hits. I think most of our runs today were with two outs. Just a great job by our offense. On the pitching side, Blaine (Knight) had to go through some hitters. It (Missouri) is a tough lineup and has been swinging it well. Blaine mixed and matched and gave us an opportunity to get that lead and hold that lead.” – Head coach Dave Van Horn on his team’s performance

“Coach (Wes) Johnson had him on a program. Every 15 minutes, we had him staying loose, keeping his body warm and hot. If his pitch count had been up, we wouldn’t have brought him back. That’s what our thinking was and we figured he could give us two maybe three innings and keep an eye on it.” – Head coach Dave Van Horn on being able to bring Blaine Knight back to pitch after the weather delay

“I had everything working. My cutter was off at times, but I was able to get it back. The fastball is what I went to the majority of the time and I was able to keep it away from them. They ran into a couple, but for the most part, that was my main pitch.” – Blaine Knight on what pitches were working for him in the game

“It wasn’t too hard to stay loose. I kept the jacket on and was sweating, but I was just trying to keep my body warm. I kind of liked it. It was a challenge. I liked having the challenge of coming back after the delay and still throwing strikes. I enjoyed it.” – Blaine Knight on pitching after the two hour rain delay

Up Next
Arkansas and Missouri will play game two of this series on Saturday with first pitch slated for 2 p.m. Tomorrow’s game is scheduled to be broadcast on the SEC Network. The game can also be heard on the Razorback Sports Network with Phil Elson calling the action.