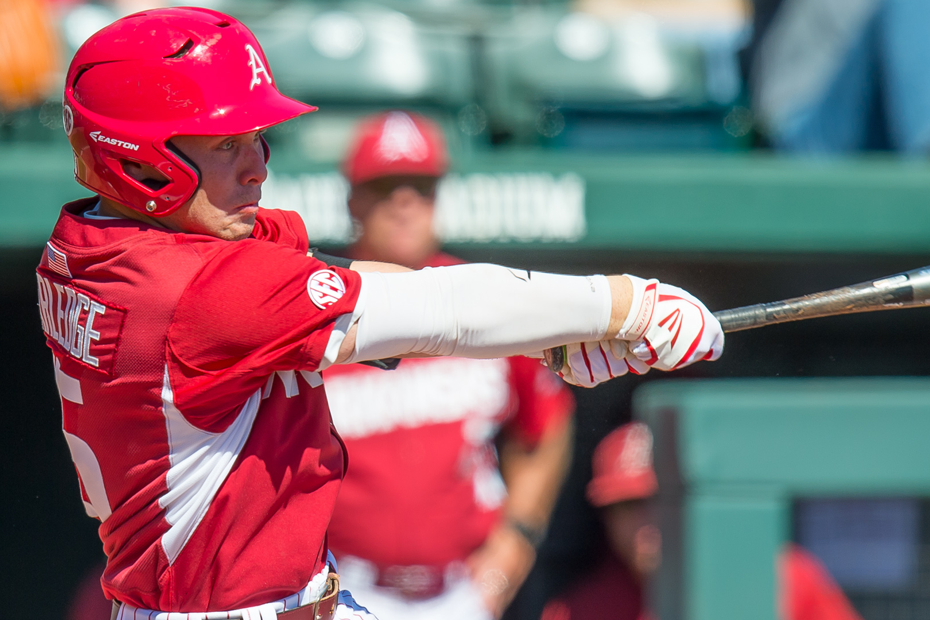 FAYETTEVILLE, Ark. – After being down five runs through three and a half innings, the 12th-ranked Razorback baseball team battled all the way back against Eastern Illinois Saturday afternoon at Baum Stadium, forcing extra innings after a game-tying pinch hit home run in the ninth by sophomore Chad Spanberger.

Unfortunately, the Panthers (1-9) scored two runs in the 12th inning, one from a go-ahead solo home run by Jason Scholl off Arkansas closer Zach Jackson and the Razorbacks (9-2) had no answer in the bottom half to fall by a score of 10-8.

Jackson was saddled with the loss, his first of the year, while Jason Euler picked up the win for Eastern Illinois, his first this season.

“It just wasn’t a pretty game,” Arkansas head coach Dave Van Horn said. “We kicked it around pretty good and we had our chances all day. We had runners all over the bases. We got a little unlucky in the seventh and eighth innings where we lined out four times. Whenever they needed a big out or a double play they seemed to get it.”

As a team, the Razorbacks had 11 hits, but struggled to find the timely hits when they needed them, going 4-for-16 with runners in scoring position. Three of those 11 hits came from home runs as junior Jake Arledge had his first two home run game as a Razorback, followed by the game-tying shot in the ninth by Spanberger. Arledge finished his career game 3-for-6 with four runs scored and three RBI.

“The first one, I was looking fastball and got it up and in,” Arledge said after the game. “I kind of extended my hands and hit a line drive, I didn’t think it was going to go out; I thought it was maybe going to be a double off the wall or one hop. It just got out of here so it was a good feeling. The second one was pretty good. I kind of knew it was gone. I was looking change up. The previous at-bat, I just missed it. I was looking for it again, he gave it to me and I just hit it out.”

Arledge and Clark Eagan both recorded three hit ball games, but were the only Hog players will multi-hit games on Saturday. Arkansas also tallied 13 walks as a team, a new season-high and the third time it has had 10 or more free passes in a game.

“We walked 13 times and we didn’t win, so that’s a little disappointing,” Van Horn said. “I give them (Eastern Illinois) credit, they just kept fighting and battling. They even brought in tomorrow’s scheduled starter to throw there in the last inning and he did a nice job getting out of that jam.”

Defensively was where the Razorbacks struggled as they had six errors in the game, the most this season and breaks a streak of five-straight errorless games the Hogs had coming in.

Eastern Illinois jumped on top of Arkansas starting pitcher Blaine Knight early scoring three runs in the first off three hits, all singles. The Panthers moved the runners around on some timely hits and forced the Razorbacks into a hole. .

Knight was able to settle down over the next two innings keeping the Panthers off the board, but then gave up two singles in the fourth before being pulled with one out. Those two hits were the start of a big five-run fourth inning for the Panthers. Anthony Dahl replaced Knight on the mound with two runners on and proceeded to give up a single and a two RBI double, giving Eastern Illinois the lead back at 5-3.

Two more runs came home in the inning for the Panthers on another two RBI double by Dane Toppel to push the lead even further to 8-3.

The Hogs did chip away at the Panther lead through the early goings, scoring two in the first inning, one in the second and two in the fourth to cut the lead to 8-5. They brought it within one in the seventh scoring two on the second Arledge home run. Meanwhile on the other side of the inning, the Razorback bullpen had held the Panthers’ offense scoreless for four-straight innings leading into the ninth.

During that stretch, only two Eastern Illinois players reached base as the combination of Cannon Chadwick, Jordan Rodriguez, Hunter Hart and Weston Rogers, kept the Panthers at bay. Only one run was allowed by those three pitchers, which wasn’t earned, giving the Razorbacks a chance in the bottom of the ninth.

After Spanberger’s home run, Arkansas still had two outs to play with in the inning, but both Rick Nomura and Arledge both flied out to end the inning and send the game to extras.

In the 11th, the Razorbacks had its best opportunity to win the game with Austin Catron standing on second after a lead-off walk, followed by a sacrifice bunt by Eric Cole. Michael Bernal walked to put two on and one out, but Grant Koch hit into an inning ending double play, taking the air out of the stadium from the Hog faithful. It was one of only two double plays for Eastern Illinois in the game.

Arkansas and Eastern Illinois will finish out the three-game series on Sunday at Baum Stadium with first pitch scheduled for 1 p.m. Keaton McKinney will get the nod for the Razorbacks, while Cole Berry will start for the Panthers.

The game will be broadcast on SEC Network+ and fans can also listen to the radio call on the Razorback Sports Network from IMG.