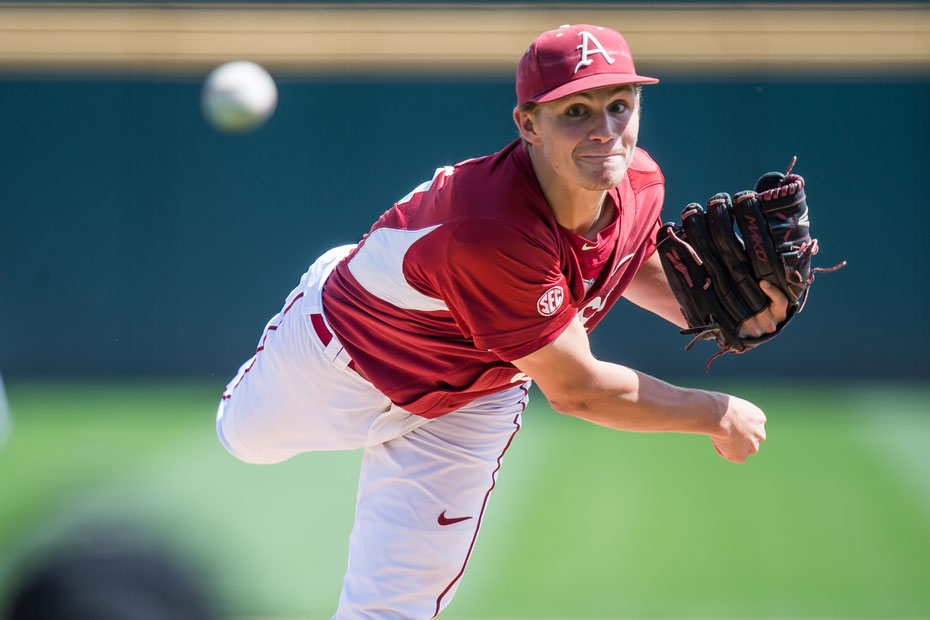 The loss drops the Hogs’ overall record to 25-8 and 8-4 in Southeastern Conference play, while LSU moves up to 22-11 and 7-5 in league play. Even with the defeat, Arkansas remains in a tie for first in the SEC Western Division with Auburn and Mississippi State.

Arkansas’s four hits came from four different players, but the team never managed to get the lead-off batter on base. Chad Spanberger, Luke Bonfield, Dominic Fletcher, and Carson Shaddy all recorded hits in the game.

It’s been a strong 10-game stretch for Spanberger going back to the series against Missouri (March 24-26). The junior has hit safely in nine of those 10 games, including Sunday’s game, and has six multi-hit games during that same span. Since conference play began, Spanberger leads all Razorbacks with a .340 average and has 19 RBIs to go along with four home runs.

On the pitching side, Josh Alberius got the start and worked into the fourth, allowing just a single run, while scattering just four hits. It’s the third time in his last five appearances that he’s thrown at least three innings and allowed one run or less.

Jake Reindl followed out of the bullpen and had his best outing of his career, going a career-long 5.2 innings, allowing just one run on two hits and tying a career-high with five strikeouts. Over his last five outings, the sophomore has allowed just one run over 14.1 innings and has struck out 15 in his last four appearances.

LSU got the single run off Alberius in the second inning after Nick Coomes doubled home Josh Smith on the Tigers’ first hit of the day. The insurance run came in the eighth inning after Reindl had already thrown four straight scoreless frames. LSU took advantage of a hit by pitch to the lead-off batter and then had another batter reach on a throwing error after the attempted sacrifice bunt. Greg Deichmann followed with a base hit through the right side to put his team up 2-0.

Razorback Quotables
“The attitude was good pre-game. We knew what we were getting into today. We were getting into a strike thrower who doesn’t really throw the ball down the middle of the plate and that’s what he did. He threw the ball in and out and was kind of deceptive. Everyone has had trouble hitting him this year. We were disappointed we didn’t win the game last night, but I thought they did a good job. The locker room was good today. We just got beat by a good pitcher. (Eric) Walker stuck it to us.” – Head coach Dave Van Horn on the team’s attitude

“That was the positive of the game for us today. Jake Reindl came in and really did a nice job of mixing his pitches, his cutter, slider, threw a few changeups, and his straight fastball that he can throw around 90-91. The cutter was upper and mid 80’s. He just did a really nice job.” Head coach Dave Van Horn on Jake Reindl

“The defense was playing great behind me and Grant (Koch) was calling a great game and that made my job quite a bit easier.” – Jake Reindl on his teammates playing behind him

Up Next
Arkansas goes on the road for a single midweek game at Missouri State on Tuesday at Hammons Field. First pitch is set for 6:35 p.m. and will be broadcast on ESPN3. Phil Elson will have the radio call on the Razorback Sports Network.