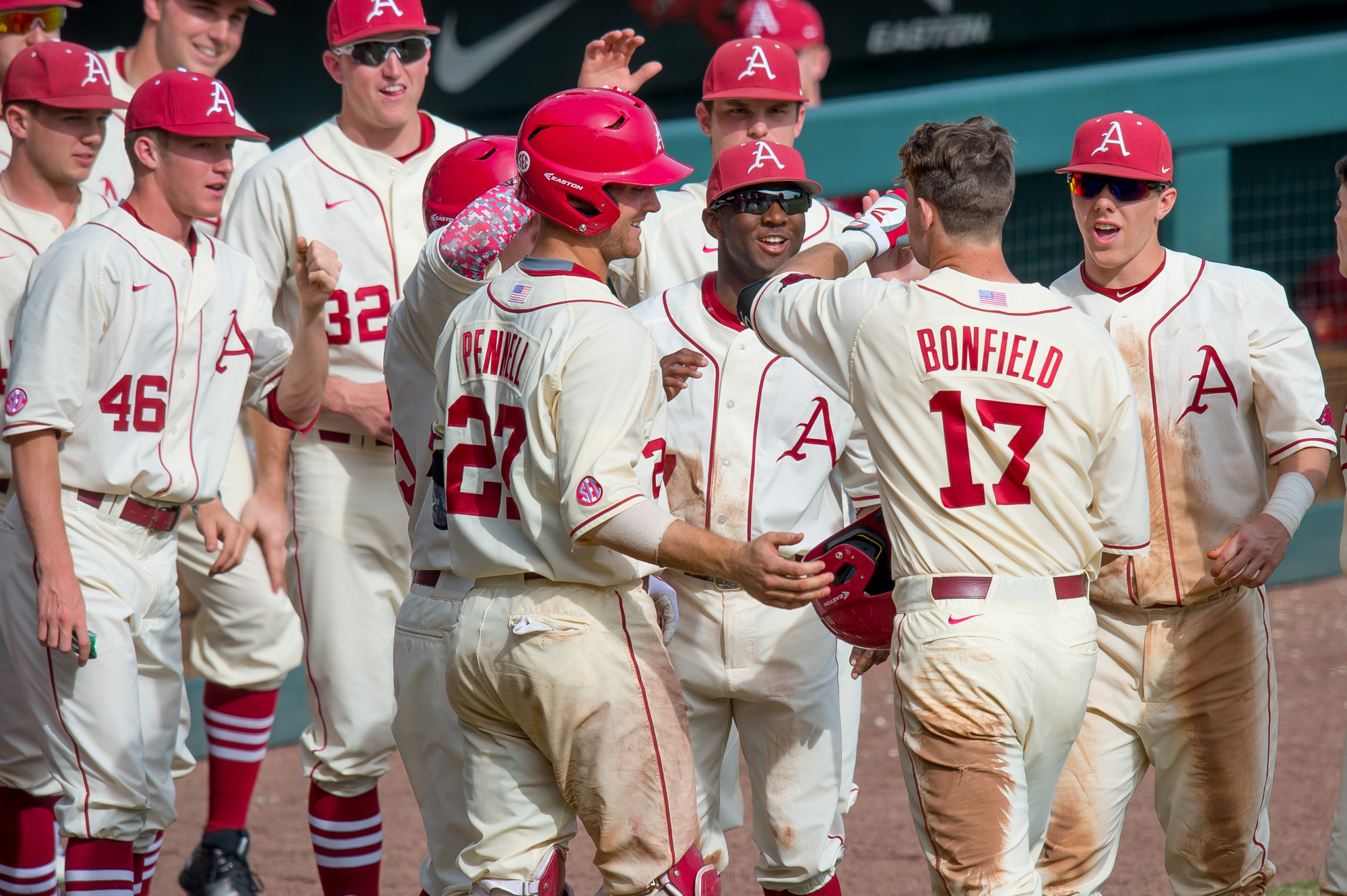 FAYETTEVILLE, Ark. – Trailing 3-1 in the fifth inning, No. 22 Arkansas plated the next eight runs of the game en route to a season-opening sweep of Mid-American Conference (MAC) West Division favorite Central Michigan, 9-4, in eight innings on Sunday afternoon at Baum Stadium.

Originally scheduled for a noon first pitch, the game was moved up to 11:30 a.m. and the two teams agreed to not start an inning after 2:30 p.m. due to travel plans for the Chippewas.

It marks the third straight year Arkansas (3-0) has opened with a three-game series sweep at Baum Stadium. Highlighted by Saturday’s crowd of 11,341, a program opening series record 28,492 fans saw the Razorbacks start the season 3-0 for the 11th time in 14 seasons under head coach Dave Van Horn.

Arkansas was first on the scoreboard for the third straight day, as senior Cullen Gassaway drilled a triple into the right center gap in the bottom of the fourth. Gassaway drove in the first run on Friday and Saturday, but this time he was the one scoring the first run as senior Rick Nomura delivered a sacrifice fly to center field for the 1-0 lead.

Five of the game’s first six runs came in a wild fifth, as Central Michigan opened the top half of the frame with three runs to knock Arkansas starter Keaton McKinney out of the game and take its largest lead of the weekend, at 3-1. The Razorbacks turned to freshman righty Anthony Dahl to get them out of the jam in the fifth and he answered with a big second out strikeout before an inning-ending fly ball limited the damage to three runs.

Central Michigan’s three runs in the top half of the fifth were fueled by three hits, while Arkansas responded with two runs on three Chippewa errors in the bottom half to tie the game at 3-3. All three errors happened on one play, as the pick-off throw from the catcher to first sailed into right field. The CMU right fielder then bobbled the ball before missing the cutoff at second allowing the runners on first and second to score to tie the game.

Arkansas was back at it again in the sixth, putting runners on the corners with no outs. After a short fly out and a foul out, senior Michael Bernal ripped a clutch two-out double down the left field line that scored pinch-runner Darien Simms and Nomura all the way from first base for a 5-3 lead. The Razorbacks increased their lead to 6-3 the very next at-bat, as senior catcher Tucker Pennell roped a 3-2 pitch into left field to score Bernal.

“It was a huge hit. It came down to a couple of veterans and Bernal got the biggest hit of the day with two outs driving in two runs to give us lead,” said Van Horn. “Then Tucker (Pennell) had a really good at-bat. He fouled off a few of pitches then lined a single and all of a sudden we’re up three runs. That was a big hit by a veteran at the right time.”

After throwing a scoreless sixth with two strikeouts, Dahl return to get the first out of the seventh before leaving in line for his first career win. Arkansas ran into a bit of trouble in the seventh, but was able to keep the lead at 6-3 due to an inning-ending double play lineout that was snagged by Kacey Murphy.

The Arkansas bats stayed hot in the seventh as it opened a six-run lead, 9-3, thanks to a three-run home run by sophomore Luke Bonfield. Eagan and Nomura both came home on Bonfield’s first career home run in which cleared the right center wall next to the 400-foot sign.

Dahl’s 2.1 scoreless innings of work included three strikeouts, as he became the second true freshman to earn a win on the mound this weekend for the Razorbacks. McKinney worked four scoreless innings to start the game, but was charged with all three runs – two earned – in the fifth.

Arkansas will be back in action at Baum Stadium on Tuesday when it opens a two-game mid-week series against Mississippi Valley State. First pitch for both games is slated for 3:04 p.m. and can be seen live on SEC Network+.

Game Notes
• The three-game attendance total of 28,492 is a new program opening series record.
• Sunday’s win marked the 450th in Baum Stadium’s 20-year history.
• Arkansas has swept its opening three-game series the last three years and five of the last six seasons.
• Arkansas has started 3-0 in 11 of 14 seasons under head coach Dave Van Horn.
• The Razorbacks have now won 18 straight and 22 of their last 23 games at Baum Stadium in the month of February.
• Arkansas has allowed 10 runs or less runs in seven of its last eight opening weekend three-game series.
• With the sweep, Arkansas is now 5-0 all-time against Central Michigan.
• Dahl is the second true freshman to earn a win on the mound this weekend, joining right-hander Blaine Knight.
• The Razorbacks pounded out a weekend-best 10 hits on Sunday, including three of their four extra-base hits in the series.
• Eight of Arkansas’ nine position starters had a hit on the day.
• Arkansas scored the first run of the game each day.
• Batters 1-4 in the Arkansas lineup (Cole, Shaddy, Eagan, Gassaway) combined to hit .425 (17-40), accounting for 17 of the team’s 27 hits in the series.
• Cole, Gassaway and Shaddy had a hit in all three games in the series.
• Cole reached base in 8 of 13 plate appearances as Arkansas’ leadoff man in the lineup.