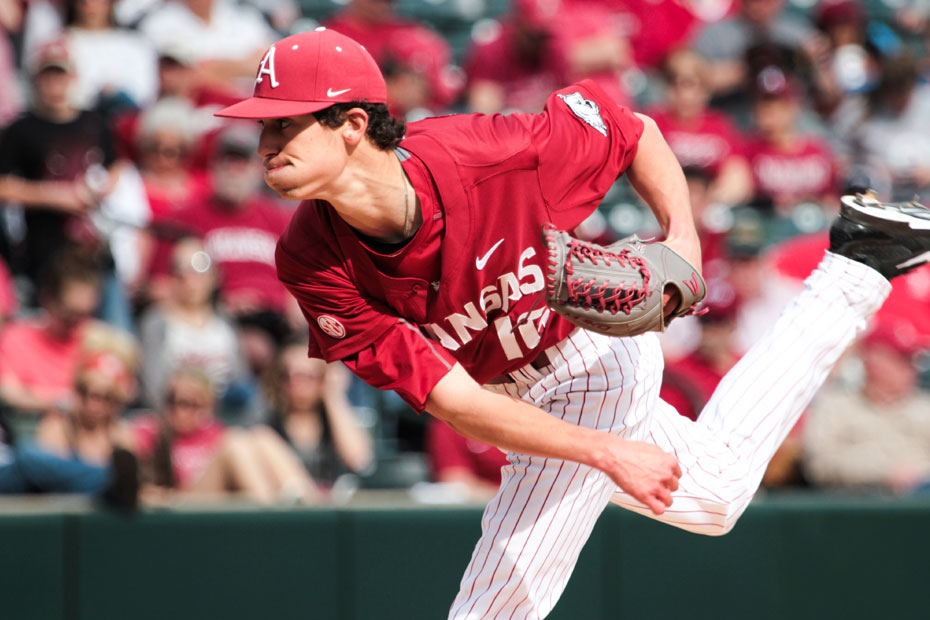 FAYETTEVILLE, Ark. – Arkansas All-American right-hander Zach Jackson picked up his first save of the season and freshman Blaine Knight registered a win in his collegiate debut, as the No. 22 Razorbacks opened the season with their second straight victory over Central Michigan, 4-3, in front of a huge crowd of 11,341 fans Saturday afternoon at Baum Stadium.

Entering the game with two runners in scoring positon with one out in the eighth and Arkansas holding a 3-2 lead, Jackson got the Razorbacks out of the jam with back-to-back strikeouts. The NCBWA Stopper of the Year Watch List member had to work himself out of trouble in the ninth, striking out the final batter of the game on a 2-2 pitch with the bases loaded.

“I thought in the eighth inning he (Jackson) really had that breaking ball working. He had a great spin and downward bite and they struggled with it,” said Van Horn, who improved to 93-15 in the month of February at Arkansas. “There in the ninth inning it wasn’t breaking quite as much, but he did throw a couple of good ones. I thought he handle himself with the state of the situation.”

For the second straight day the top half of the Arkansas lineup provided the offensive spark, combining to go 6-for-13 with three runs scored. True freshman Eric Cole continues to set the table at the leadoff spot, scoring a pair of runs while redshirt sophomore Carson Shaddy put together his second straight multi-hit performance (2-4) in the No. 2 position. Junior Clark Eagan went 2-for-3, highlighted by an RBI single in the two-run fifth inning.

Originally scheduled for noon, Sunday’s series finale will now begin at 11:34 a.m. and can be seen live on SEC Network+ and the WatchESPN App.

Making his first collegiate start in front of a packed Baum Stadium, Knight opened and closed the first inning of his debut with a strikeout. Just like Friday opener, Arkansas took a 1-0 lead after the first inning thanks to Cole leading off the game with a single for the second straight day before coming around to score on a sacrifice fly to center field by senior Cullen Gassaway, good for his third RBI of the weekend.

Central Michigan got to Knight in the top of the fourth, plating a pair of runs to take its first lead of the series at 2-1 and worked out of jam in the bottom half to hold off the Razorbacks.

Knight responded well in the fifth, recording his second 1-2-3 inning of the day to set the stage for the top of the Arkansas lineup. Cole worked a leadoff walk before Shaddy, Eagan and Gassaway delivered three straight singles. Eagan’s second hit of the night came with two strikes and drove in Cole to tie the game at 2-2. With the bases loaded and no outs,

The score remained 3-2 into the bottom of the eighth thanks to Jackson’s breaking ball. Junior Austin Catron took full advantage in the bottom half of the eighth with a pinch-hit RBI single that drove in the eventual game-winning run for a 4-2 lead.

Drama crept into the game in the top of the ninth with two outs, as Jackson loaded the bases and allowed a run that made the score 4-3. For the second straight inning, Jackson worked out of the jam, this time getting the final out on a fastball.

Game Notes
• Over the opening two games of the season, a total of 20,961 fans have watched the Razorbacks start 2-0.
• Arkansas has won its first two games in six straight seasons.
• The Razorbacks have now won 17 straight and 21 of their last 22 games at Baum Stadium in the month of February.
• The win marks the ninth straight three-game series Arkansas has won at Baum Stadium to open the season.
• Out of his last 41 outs recorded in his last six appearances at home, Jackson has 23 strikeouts.
• Jackson has at least one strikeout in 22 of 25 career relief appearances at Baum Stadium.
• Over the first two games, Arkansas’ starting pitchers have given up just five hits in 12 innings with eight strikeouts and one walk.
• Through the first two games, batters 1-5 in the Arkansas lineup have 12 of the team’s 17 hits.
• Cole has scored the first two runs in each of Arkansas’ game this season.
• Marks the first time in Shaddy’s career that he’s had back-to-back multi-hit games.