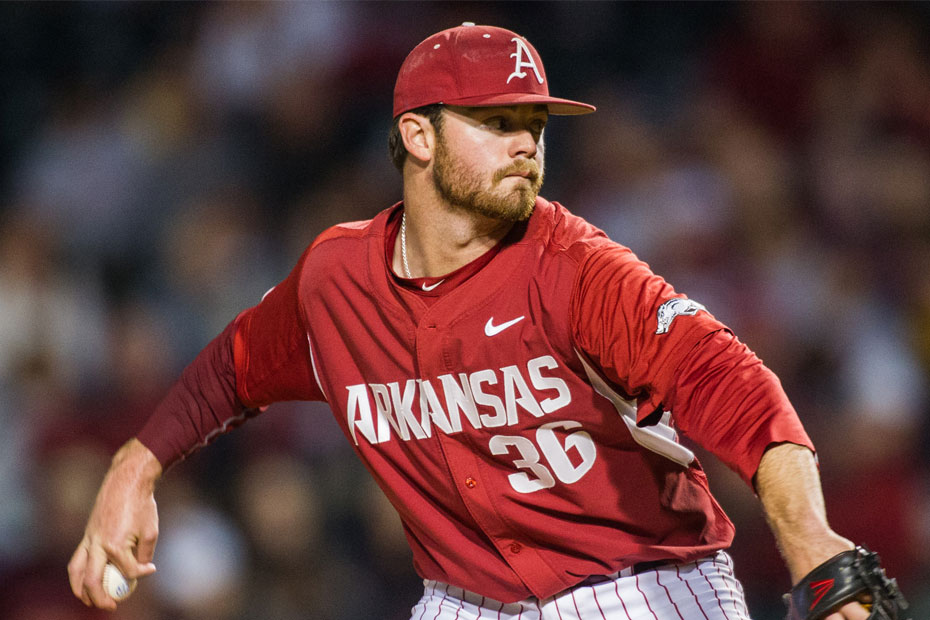 Hogs Even Series On Back Of Strong Bullpen

AUBURN, Ala. – 14th-ranked Arkansas bounced back Saturday afternoon, defeating 10th-ranked Auburn, 7-3, at Plainsman Park. After trailing 3-0 after the first two innings, a Jared Gates homer and a strong bullpen led the Hogs to their 12th conference victory of the year and forced a rubber match for the series on Sunday.

Razorback starting pitcher Trevor Stephan labored through 1.1 innings and was relieved early in the game after the Tigers (29-12, 11-6 SEC) struck for three runs.

However, Arkansas (32-9, 12-5 SEC) answered with three runs of their own in the third inning, two from a home run by Gates and two more in the seventh on a sacrifice fly by Dominic Fletcher. The bullpen responded with seven-straight scoreless frames to finish as the Tigers had no answer for the combination of Cannon Chadwick, Evan Lee, and Jake Reindl.

Gates finished the game just 1-for-5 with two RBIs, but had the all-important homer that tied the game at 3-3. Luke Bonfield and Eric Cole each turned in two-hit days. It’s the second multi-hit performance for Bonfield in the series and ninth for Cole this season.

Chadwick picked up the win for the Razorbacks after throwing 4.1 scoreless innings with four strikeouts. It’s his longest outing of his career and his fourth win of the season. Sophomore Jake Reindl picked up the three-inning save, his first of his career.

Reindl shut the door in the seventh, eighth, and ninth innings, striking out a career-high six batters and only allowed three baserunners. In four of his last seven outings, the sophomore has racked up four or more strikeouts and has only given up one earned run in five conference appearances.

Moments That Mattered
Auburn chased Stephan in the middle of the second inning after jumping out to a 3-0 lead. Stephan battled through the first on 21 pitches and then reached 50 pitches before being pulled, tying for his shortest start of the year.

But, the Hogs swung their way back in it in the third when Bonfield skied a deep fly ball to centerfield for the sacrifice fly to score Jake Arledge, his 38th RBI of the year. In the next at-bat, Gates mashed a two-run homer over the right field wall, tying the game at 3-3. For Gates, it was his third home run of the year and Arkansas’ first long ball of the series.

With the game tied and Stephan already taken out of the game, the Razorbacks needed strong innings out of their bullpen, and that started with Cannon Chadwick. The senior entered the game in the middle of the second inning and threw over four scoreless innings, his longest outing of his career.

He ran into trouble though in the sixth after hitting three batters to load the bases, but corralled two outs in the process.That’s when Arkansas head coach Dave Van Horn decided to go to the bullpen and bring in the freshman Evan Lee. Lee faced Auburn’s lead-off batter Jonah Todd and got him to strike out swinging on four pitches, leaving the bases loaded and killing the Auburn rally.

Arkansas took its first lead of the series in the sixth by taking advantage of some control issues from Auburn pitcher Andrew Mitchell. The hurler walked the first three batters faced, giving Dominic Fletcher the opportunity to get a sacrifice fly. Fletcher did the job by sending a ball deep to right field, scoring Grant Koch and giving the Hogs the 4-3 lead. It was Fletcher’s only RBI of the game and the Hogs never lost the lead for the remainder of the game.

Lee only faced one batter in the seventh before Arkansas went to the bullpen again, bringing in Reindl. Reindl was masterful for the final three innings, striking out a career-high six and allowing only three baserunners the rest of the way.

Razorback Quotables
“This team has a lot of good chemistry and it’s genuine. They believed we could win and just kept fighting. Before you know it, it’s tied up. It just says that we’re pretty tough minded and they’ll fight to the end.” – Head coach Dave Van Horn after his team’s bounce-back win

“The bullpen just mixed and matched today. When we brought (Evan) Lee in to face the lefty, we said ‘we need to find something out about him on the mound.’ We’ve been telling him this is his role and he came in and did the job.” – Head coach Dave Van Horn on Evan Lee getting a key strikeout in the sixth

“Obviously, it was the biggest swing of the game. I thought Jake Arledge started that inning off and had a great at-bat. He took a full count, fouled off a pitch or two and got the walk. We got the sacrifice fly and then the big two-run homer. We definitely felt like the momentum was on our side of the diamond after that.” – Head coach Dave Van Horn on Jared Gates’ game-tying home run

Up Next
Arkansas and Auburn will play the rubber match of this three-game series on Sunday at Plainsman Park. First pitch is slated for 3 p.m. and will be televised on the SEC Network. Phil Elson will also be calling the game on the radio for the Razorback Sports Network.