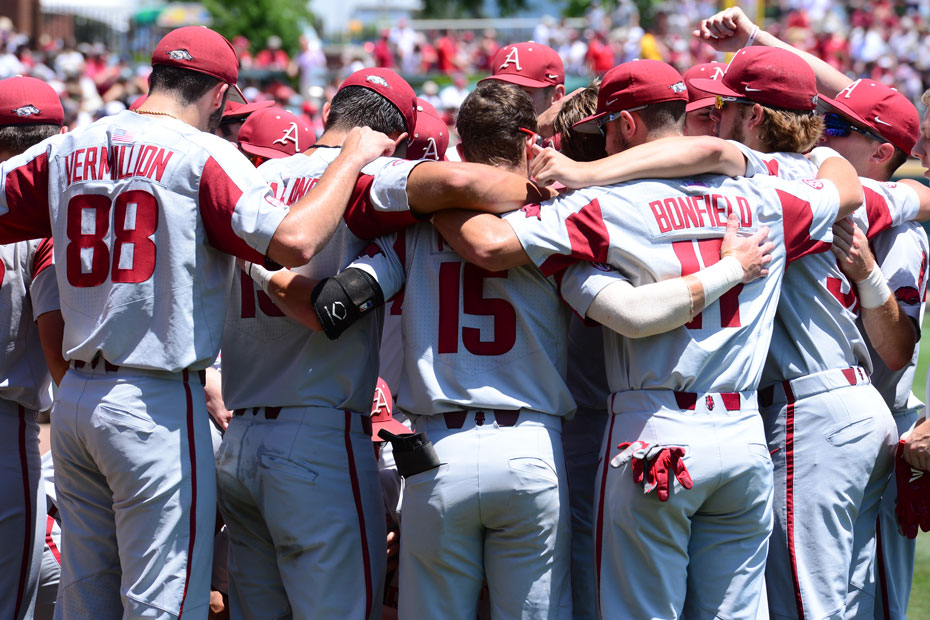 FAYETTEVILLE, Ark. – Carson Shaddy and Casey Martin each had two hits Sunday afternoon, but South Carolina topped Arkansas with an 8-5 victory in game two of the NCAA Fayetteville Super Regional at Baum Stadium.

The Gamecocks win evens up the best-of-three series at 1-1 with a winner-take-all game three set for Monday at 6 p.m. (CT) on ESPN.

Shaddy and freshman Heston Kjerstad both homered for the Razorbacks in the setback. For Shaddy it was his 12th of the year and for Kjerstad, his team-leading 14th of the year. However, the Hogs could never put together the big inning like they had on Saturday as South Carolina built up a six-run lead by the sixth inning.

Tomorrow’s game will mark the fourth time Arkansas will play a deciding third game in a Super Regional in its history and the seventh time the Razorbacks and Gamecocks have faced off this year.

The Hitting
With two big flies Sunday from Shaddy and Kjerstad, the Razorbacks tied the program’s single-season record of 92 home runs set by the 2010 squad.

Individually, Kjerstad snapped a three-way tie for Arkansas’ freshman home run mark that he previously shared with Zack Cox (2009) and teammate Casey Martin. With his solo shot in the seventh inning, the Amarillo, Texas, native now leads the club with 14 home runs.

Shaddy continued his torrid pace in the postseason with two more hits Sunday. The redshirt senior is hitting .467 (7-for-15) with 11 RBI through Arkansas’ first five games of the NCAA Tournament.

As for Kjerstad, he’s also been one of the Razorbacks’ top hitters this postseason. Including today’s homer, Kjerstad is batting .421 over the five-game span with a team-leading eight hits and three home runs. The home run on Sunday extended his hitting streak to five games, which is the longest current streak on the team.

The Pitching
Junior starter Kacey Murphy battled through 4.1 innings Sunday, allowing six hits and four runs in what tied for his second-shortest outing of the year.

Redshirt sophomore Cody Scroggins was the fourth relief pitcher out of the bullpen for the Razorbacks, and the most effective, as he struck out two over a career-long 2.1 innings. He allowed only one hit and walked two in 10 batters faced.

From The Head Coach
“It says they’re good. That’s why they’re here in a Super Regional. They battled through another Regional and got through a season. They beat a lot of good teams to have a chance to play in a regional and then win it and then come here. We’ve played a lot of games here and won a lot of games here. We’ve beaten people by 10 runs, we’ve lost by a couple of runs here and there and we’ve played a lot of tight games. We’ve been very fortunate. It just comes down to one game. It doesn’t really matter what we did in the past.” – Head coach Dave Van Horn on South Carolina beating Arkansas twice at Baum Stadium this year

“I feel fine with Isaiah. He has great stuff. If he goes out and does what he can do, he’ll be out there for a while. If he doesn’t, we’ll go to the next guy. You get down to this point – and I’m sure [South Carolina] is the same way – you just have to go with what you see and what you feel. There’s no tomorrow, basically. We’ll give him the ball and let him have it as long as he earns it. Hopefully he’ll give us some innings.” – Head coach Dave Van Horn on Isaiah Campbell starting game three

“We’re very confident. We’re going to wake it up. We’re going to get to the yard and get ready to work. They’re not going to give us anything, but we wouldn’t want to have it any other way. We want to be tested. We don’t want to be handed anything; that’s not how we’re raised or how we are. We’re going to come here tomorrow and play our best game of the year and see what happens.” – Carson Shaddy on the team’s mindset going into game three of a Super Regional