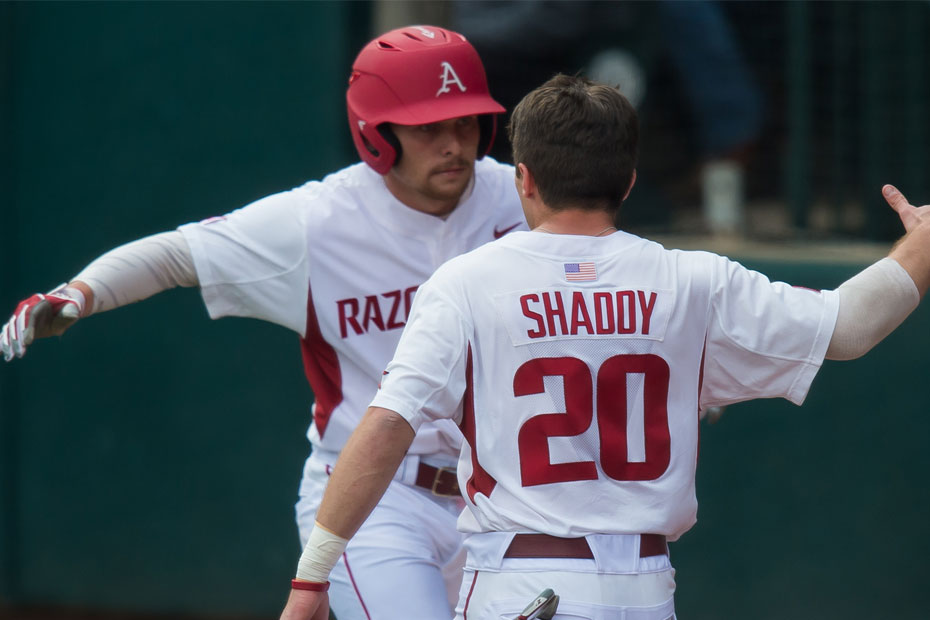 FRISCO, TEXAS – On a cold and rainy night at the Frisco College Classic, Arkansas fought through a late start and low temperatures, while getting a five RBI performance from redshirt junior Carson Shaddy to defeat Nebraska, 15-5, at Dr. Pepper Ballpark.

The Hogs jumped on the Cornhuskers early for three runs in the first and three more in the third. Four of those runs came off the bat of Shaddy as doubled twice down the right field line bringing in two runs both times. He ended up with a fifth RBI in the fourth after drawing a walk with the bases loaded.

Junior pitcher Trevor Stephan battled through a tough first twos innings to settle in and throw six innings, giving up only two runs, one earned, on three hits and striking out a season-high eight batters. Including the strikeout he had to finish the second inning, Stephan retired 12 of the final 15 batters he faced before being relieved before the start of the seventh inning.

Stephan picked up the win to move to 3-0 on the year. With his eight strikeouts, the junior has recorded five or more strikeouts in each of his starts this year.

Arkansas didn’t look back after taking a 6-2 lead after three innings. Nebraska pitching struggled to find the plate in the fourth walking four straight batters with two outs to allow another run to come home and make it 7-2.

If the five-run lead was in doubt before the fifth inning, catcher Grant Koch put those doubts to bed in his second at-bat of the game when he launched his fourth home run of the game, a grand slam, to make it 11-2 in favor of the Hogs. Koch finished the game 2-for-3 with three runs scored, four RBIs and two walks.

Koch is now tied for the SEC lead with four home runs this season and he’s the first Razorback to hit a grand slam since Rick Nomura hit one against Gonzaga last season (March 9, 2016).

Nine different Razorbacks recorded at least one hit in Saturday’s game. Both Shaddy and Luke Bonfield notched three hits in the game. Bonfield was a near-perfect 3-for-4 at the plate with four runs scored and an RBI. The three hits ties a career-high. Jordan McFarland also turned in a multi-hit game, going 2-for-3 at the dish, his third multi-hit game of the year.

Up Next
Arkansas finishes out its Frisco College Classic schedule on Sunday when it faces No. 14 Oklahoma State with first pitch scheduled for 3:30 p.m at Dr. Pepper Ballpark. The game will be televised on CST and on the radio on the Razorback Sports Network.