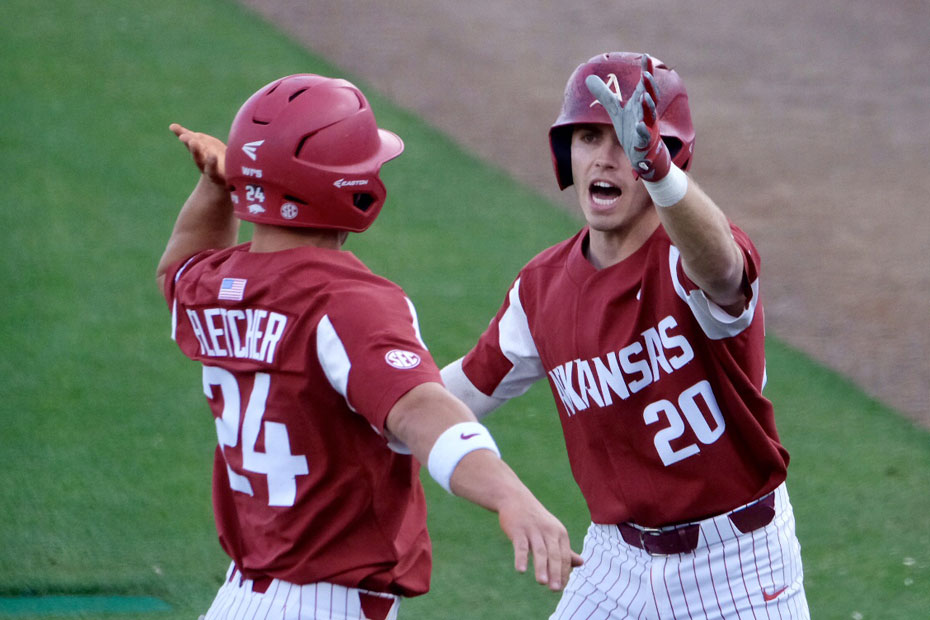 GAINESVILLE, Fla. – Freshman Heston Kjerstad continued to swing the hot bat and the No. 4 Arkansas Razorbacks got their series with the No. 2 Florida Gators off on the right foot Friday night, winning 6-3, at McKethan Stadium, their fourth conference win in a row.

It’s the second-straight year that Arkansas (17-5, 4-0 SEC) has begun conference play with four consecutive victories. In the four wins this year, it’s been the offense that has carried the squad as the Hogs have hit at least two home runs and totaled 10 or more hits in each game. Tonight, it was Kjerstad and Sophomore Dominic Fletcher who launched long balls, giving Arkansas 43 homers for the year, which continues to lead the SEC.

Kjerstad fell just a triple shy of the cycle Friday night and hit his sixth home run of the year in the sixth inning, his third in his last seven at-bats. Kjerstad had a single, a double, and a home run all before the seventh inning and walked in his fourth plate appearance in the eighth to keep his perfect day intact.

Kjerstad’s 3-for-3 day at the plate easily extends his hit streak to six games dating back to the March 14th game against Texas. During that span, the freshman has amassed 10 hits and 11 RBIs with four home runs, the best among all Razorbacks.

The Hogs also got a great outing from right-hander Blaine Knight, who locked up his fourth win of the year. The junior outdueled Florida starter Brady Singer by throwing a quality 6.2 innings with three earned runs allowed and 10 strikeouts, just one shy of his career high. It’s his first start this year with 10 or more strikeouts and fifth quality outing out of six starts.

Sophomore Matt Cronin got the six-out save by coming out of the bullpen in the middle of the eighth and retiring six of seven batters with three strikeouts. It’s Cronin’s fourth save of the year and third in as many appearances.

The Razorbacks got major production from its 5-9 hitters against the Gator pitching staff to open the series. The combo of Fletcher, Jordan McFarland, Kjerstad, Grant Koch, and Carson Shaddy went 8-for-17 (.471) on Friday, six of those hits coming off Singer.

Arkansas hitters have dominated Singer going back to last year’s SEC Tournament semifinals. In those two starts, the Hogs have totaled 17 hits and 15 earned on the former second-round pick and compiled a .395 batting average. Coming into Friday night’s game, Singer held hitters to a .207 average and given up just seven earned runs in 2018.

Tonight, Arkansas strung together three hits in the second to jump on the Gators early, scoring the first three runs of the game, two off a single from Shaddy that ricocheted off Singer’s leg and bounced into right field, scoring Kjerstad and McFarland.

Arkansas now has scored 80 runs in the first three innings this season, which still accounts for 41 percent of the Hogs overall runs.

Sophomore Dominic Fletcher provided his third home run of the year in the fourth inning, going to straightaway centerfield. He finished the game 2-for-4 with two runs scored and extended his hitting streak to seven games. Over his last four games, the California native has seven hits, two for extra bases, and has totaled three multi-hit games.

Up Next
Arkansas will hope to win the series on Saturday as it will play game two against the Gators at 11 a.m. CT on ESPN2. Redshirt sophomore Isaiah Campbell, coming off an eight-inning performance against Kentucky last week, will take the mound against Florida’s Jackson Kowar.