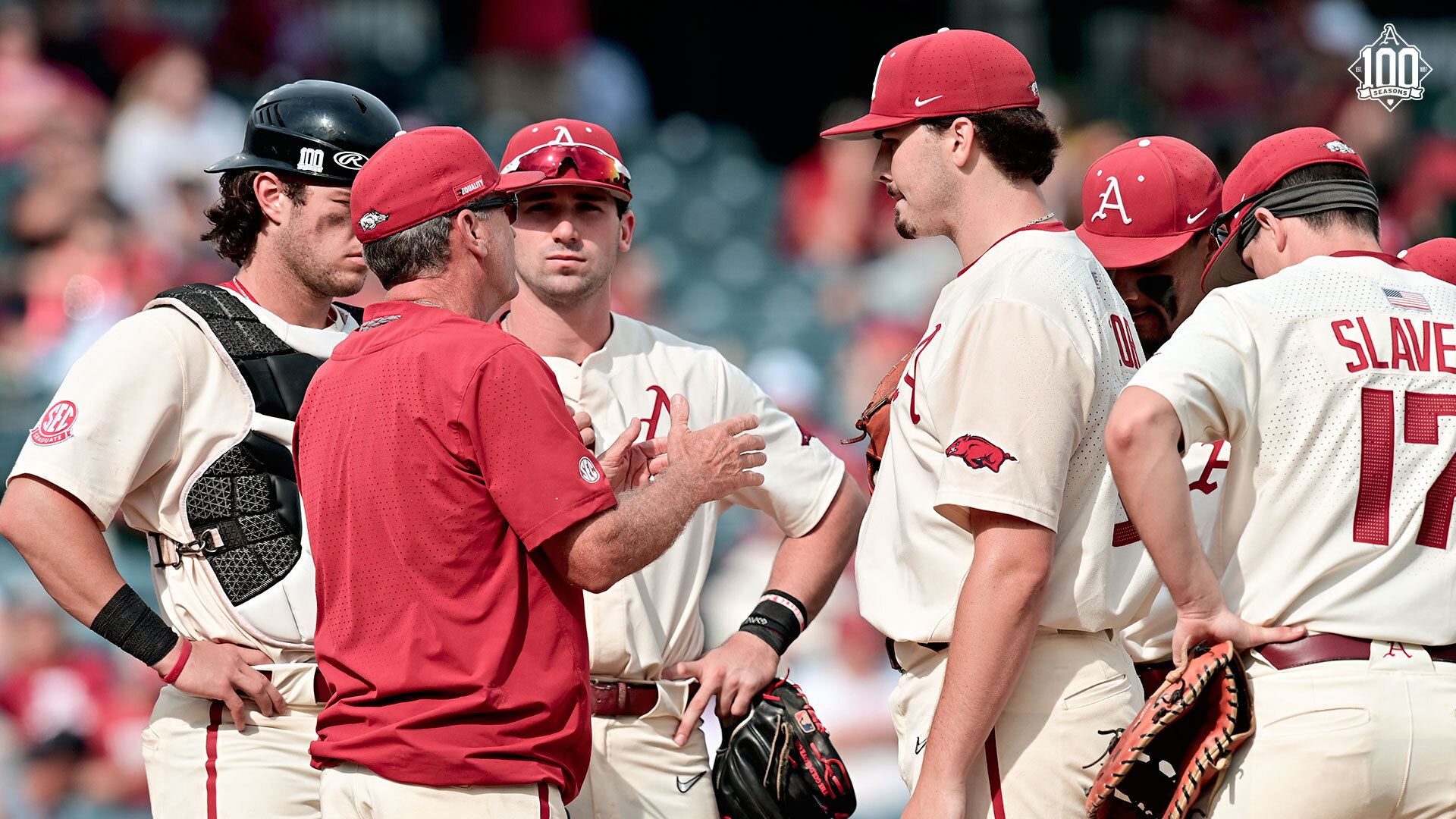 Hogs Held in Check at Home, Lose Series to ‘Dores

The Hogs entered this weekend with the longest active SEC home series winning streak (12). With its series loss to Vanderbilt, Arkansas falls to 18-2 in SEC home series over the last four seasons.

Arkansas and Texas A&M (33-16, 17-10 SEC) are now tied for first atop the SEC Western Division standings with three games left to play.

The Razorbacks will conclude the regular season on the road in Tuscaloosa, Ala., this weekend. First pitch of the three-game series between Arkansas and Alabama (27-24, 10-16 SEC) is set for 6 p.m. Thursday, May 19, on SEC Network+.

Game 2: #4 Arkansas 11, #24 Vanderbilt 6
Sunday began with the completion of Saturday’s game, which was suspended in the sixth inning due to the weather.

The Hogs had built an 8-6 lead behind Cayden Wallace’s pair of home runs before rain and lightning struck at Baum-Walker Stadium. Wallace smoked a leadoff homer in the first to open the scoring and later helped Arkansas overcome a four-run deficit with a go-ahead three-run tater in the fourth.

Jace Bohrofen’s two-run double in the fifth extended Arkansas’ advantage to 8-5 before the contest was suspended with the Hogs ahead by two entering the bottom of the sixth.

Arkansas wasted no time adding to their lead when the action restarted at 11 a.m. Sunday, scoring three more runs to put the game out of reach. Jalen Battles drilled his eighth homer of the year in the seventh, extending the Hogs’ lead to five.

Will McEntire emerged from the bullpen to lock down the final three innings of the ballgame and force Sunday afternoon’s rubber match. The right-hander held Vanderbilt scoreless while striking out three to preserve Arkansas’ 11-6 win and earn his first career save.

Game 3: #24 Vanderbilt 5, #4 Arkansas 0
After a three-hour weather delay, Sunday’s rubber game between Arkansas and Vanderbilt did not get underway until 3 p.m. Razorback starter Jaxon Wiggins was worth the wait early on, however, racking up four strikeouts over his first two innings.

After surrendering an unearned run in the third, Wiggins continued to collect strikeouts and finished his outing with eight over 4 1/3 innings of work. Vanderbilt put runners on in the fifth to force Wiggins out of the game before breaking through against Razorback reliever Evan Taylor.

With two outs, Dominic Keegan snuck a grounder up the middle to score a pair and extend the visitors’ lead to 3-0. The ‘Dores added to their three-run advantage in the sixth with a two-run shot by Tate Kolwyck.

Vanderbilt freshman pitcher Carter Holton, meanwhile, silenced the Arkansas offense all game, throwing a seven-inning complete game shutout while allowing just two hits and tallying five strikeouts. He worked around a leadoff walk in the seventh, retiring the next three batters faced to finish off his gem and seal Arkansas’ series-losing 5-0 defeat.