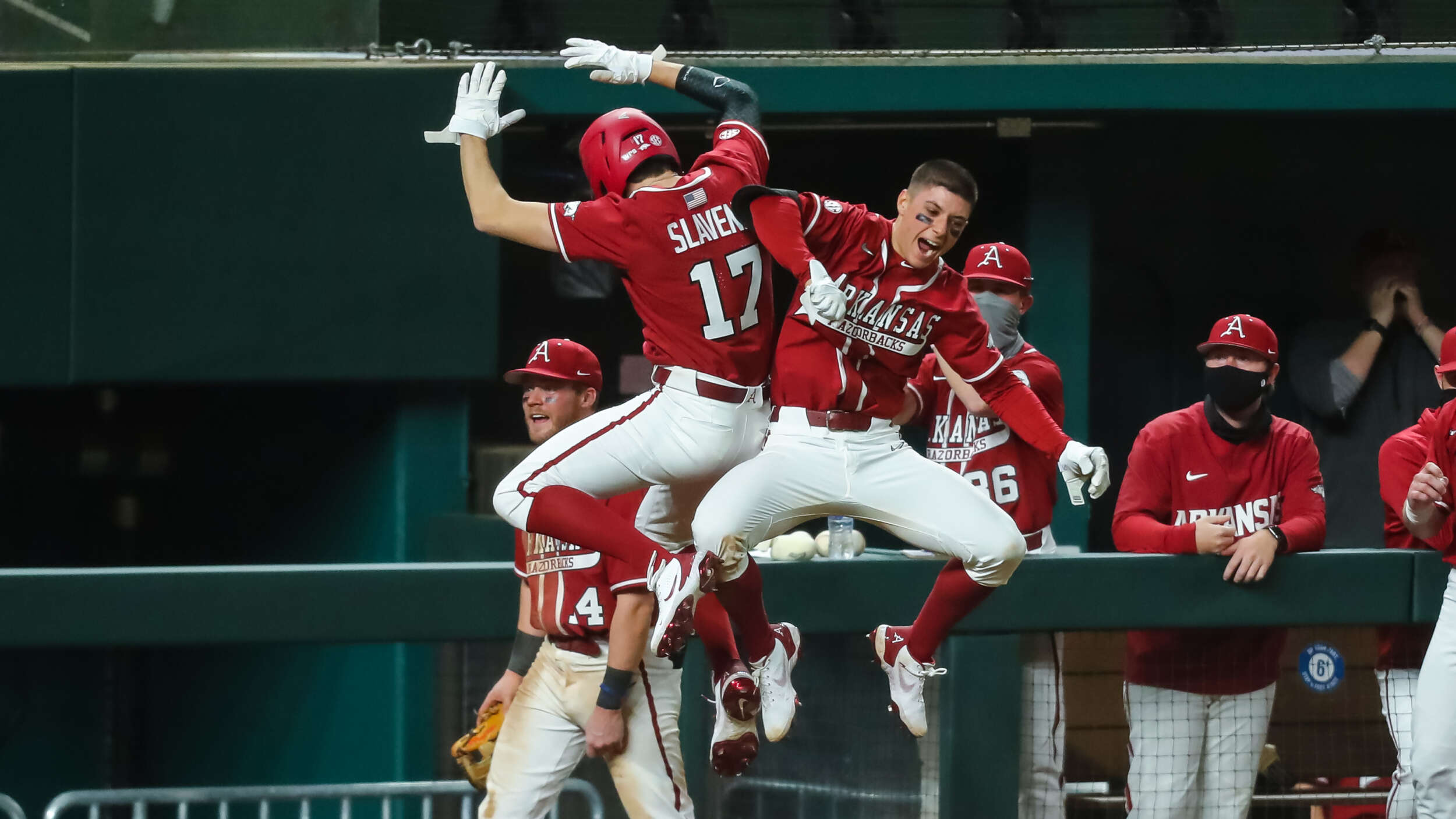 ARLINGTON, Texas – The Razorbacks’ long-awaited return to the diamond lived up to the hype and then some.

After four scoreless innings to begin the ballgame, both teams’ bats came alive in the fifth and stayed hot the remainder of the night. A one-run Razorback lead became a four-run deficit by the end of the fifth after the Red Raiders scratched out five runs in the bottom half of the frame.

Arkansas responded with four runs of its own in the top half of the sixth to tie the game at five. Shortstop Jalen Battles, who racked up a team-best three hits and drove in a team-high three runs in his Hog debut on Saturday, doubled home two runs as part of the Razorbacks’ sixth-inning outburst.

Texas Tech came back in the bottom of the inning to retake a one-run lead, but the Hogs did not relent. Three more Razorback runs, powered by a Red Raider balk and wild pitch, moved Arkansas ahead, 8-6, in the top of the seventh.

The lead, however, was far from safe. Texas Tech’s Braxton Fulford launched a three-run homer to put his team back in front, 9-8, in the bottom of the seventh.

The Razorbacks and Red Raiders exchanged zeroes in the eighth, as Arkansas entered the ninth down one with three outs to go. With their backs against the wall, the Hogs came out swinging.

A five-run frame was started by catcher Casey Opitz’s leadoff single. Opitz then came around to score on Battles’ single to left, which knotted the game at nine.

From there, it was all Arkansas. The Razorbacks scored four more runs in the frame, including two on left fielder Braydon Webb’s single to center field, to open a 13-9 advantage.

Right-handed pitcher Elijah Trest, who locked down the final three innings of the ballgame, worked around a two-out walk in the bottom of the ninth to shut the door on the Red Raiders and seal the Arkansas win.

Right-handed pitcher Zebulon Vermillion made his first career start, striking out four in four innings of work. Trest, meanwhile, entered the ballgame in the bottom of the seventh and shoved, allowing a run on two hits while striking out four to earn the victory.

Opitz drew a team-leading three walks, and second baseman Robert Moore collected two hits with an RBI in the triumph. Webb also shined defensively, taking away an extra-base hit with a spectacular jumping catch against the wall in left.

The action at the State Farm College Baseball Showdown continues tomorrow night when Arkansas faces another nationally ranked team in No. 9 Texas. First pitch between the Razorbacks and Longhorns is set for 7 p.m.