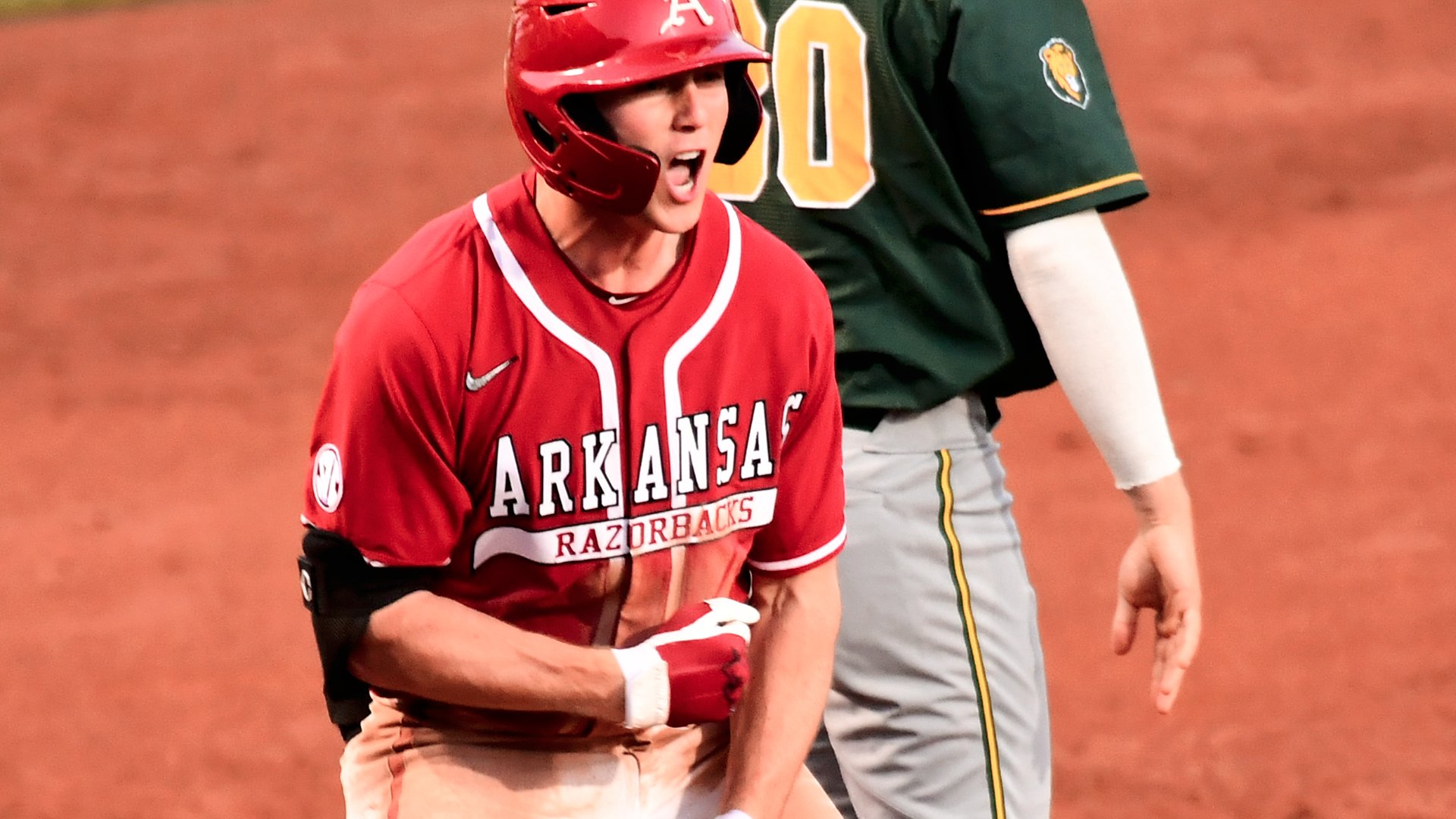 Hogs Power Past Lions in Doubleheader

FAYETTEVILLE, Ark. – Another weekend has come and gone with an Arkansas series win.

The third-ranked Razorbacks (7-3) powered past Southeastern (5-7) in Saturday’s doubleheader at Baum-Walker Stadium, taking game one, 4-2, before run-ruling the Lions in eight innings, 11-1, in game two.

The Hogs, who dropped Friday afternoon’s series opener, have not lost a non-conference home series since the 2014 season.

Arkansas’ pitching was superb all day long, combining for a three-hitter in both games of the doubleheader. True freshman Hagen Smith twirled seven innings of two-hit, two-run ball with a career-high nine strikeouts in game one on Saturday, while Jaxon Wiggins, went a career-long 6 1/3 innings with a career-high seven strikeouts, allowing only one run on two hits in game two.

The Razorbacks’ homestand continues next weekend with a four-game set against UIC. First pitch in the opener is 3 p.m. Thursday, March 10, at Baum-Walker Stadium.

Game 1: Arkansas 4, Southeastern 2
Smith set the tone from the start, sitting down the first six Southeastern batters he faced. The Bullard, Texas, native fired zeroes over his first five innings on the bump.

His run support came in the bottom of the third and fourth innings. Turner’s RBI double scored Zack Gregory from second in the third before Peyton Stovall’s RBI single in the fourth brought home Chris Lanzilli to make it a 2-0 ballgame.

A two-run shot off Smith tied things up in the sixth, but the Hogs came back with two runs in the bottom half of the seventh. Turner swatted his second home run as a Razorback, putting Arkansas ahead, 4-2, and allowing Smith to qualify for his second win of the young season.

Zebulon Vermillion and Brady Tygart emerged from the bullpen to toss the final two innings, combining for two strikeouts. Tygart worked a scoreless ninth to lock down his first collegiate save and secure the Hogs’ win.

Game 2: Arkansas 11, Southeastern 1
One combined three-hitter was not enough, so Arkansas went ahead and did it again in game two of the doubleheader.

Wiggins, much like Smith, was strong from the get-go, working five scoreless innings before facing his first adversity in the sixth. By then, the Razorbacks had staked him with a two-run lead, thanks to Kendall Diggs’ first collegiate RBI in the second and Lanzilli’s RBI double in the fourth.

A leadoff home run by Southeastern in the top of sixth could have made things interesting, but Wiggins settled down to retire the next three he faced. The hard-throwing right-hander pitched into the seventh before giving way to the bullpen.

Evan Taylor and Kole Ramage had no problems in their combined 1 2/3 innings, but they had plenty of run support to fall back on. The Razorbacks scored four in both the bottom of the seventh and eighth, highlighted by Bohrofen’s bases-clearing triple in the latter inning.

The Oklahoma transfer followed up his big hit by dashing home on a wild pitch to extend Arkansas’ lead to 11-1, initiating the game-ending run rule in the eighth.