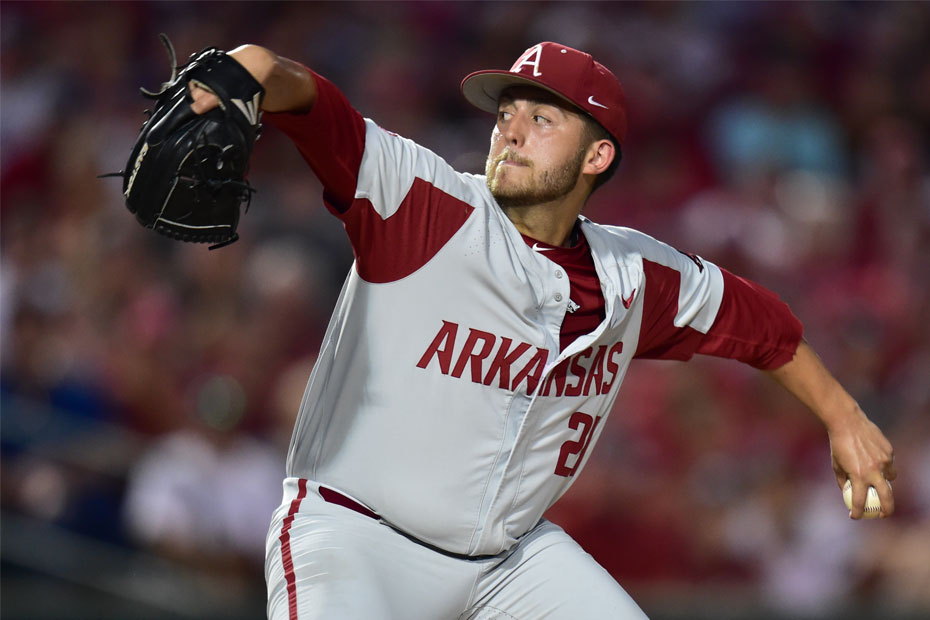 FAYETTEVILLE, Ark. – The top-seeded Razorback baseball team had another ideal performance in its’ second game of the NCAA Fayetteville Regional Saturday night as the offense was able to score 10 runs for the second-consecutive night, while starting pitcher Kacey Murphy worked eight scoreless innings en route to a 10-2 victory over two-seed Southern Miss at Baum Stadium.

Arkansas (41-18) scored seven runs on Southern Miss (44-17) in the second inning, its most in an inning since game two of a doubleheader against Kentucky (Seven-run 1st – March 17), and forced the Golden Eagles starter to exit the game after only 1.2 innings pitched.

Senior Jared Gates and junior Eric Cole both homered in the second, going the opposite way both times, for their fifth and 13th home runs of the year, respectively. Gates and Cole both finished with two RBIs apiece, while Cole tied a team high with three hits in the game, his 11th game with three or more hits this year.

On the mound, junior Kacey Murphy matched his teammate Blaine Knight from the day before with eight innings of work, locking up his eighth win of the year and ninth quality start. Murphy did Knight one better by going eight scoreless, while giving up just two hits, walking one, and striking out five. The eight innings of work was a career-high, topping his previous high of 7.1 innings against Texas A&M (May 12) earlier this year.

With Saturday night’s win, Arkansas will have to wait until tomorrow afternoon to find out its opponent for the regional final as Southern Miss and Dallas Baptist will play an elimination game at 2 p.m. The winner will advance to face the Razorbacks later in the day.

The Hitting
Five different players recorded multi-hit games Saturday night with Cole and redshirt senior Carson Shaddy leading the way with three hits each. Cole finished 3-for-5 with two RBIs, both coming off the homer in the second.

Shaddy earned his fifth three-hit game of the year, going 3-for-4 with three RBIs, falling just a home run shy of the cycle. Shaddy’s two-run triple scored the final runs of the big second inning and was the fifth three-bagger of the year for Arkansas.

Senior Jared Gates, sophomore Dominic Fletcher, and freshman Casey Martin all went 2-for-5 at the plate Saturday with Gates’ two-run big fly starting all the scoring in the second inning. It was the second home run of the postseason for Gates and one of, now, six hit in the regional.

Of the six home runs hit by Razorbacks this weekend, four have gone the opposite way as both of Heston Kjerstad’s home runs last night and Gates’ tonight found the left field Hog Pen, while the switch-hitting Cole took one out to right field from the right side of the plate.

With the two home runs hit tonight, Arkansas now has 90 for the year, which continues to lead the SEC and is only two away from tying the all-time school record for home runs in a season (92 in 2010).

The Pitching
Once again, Arkansas was able to save the main portion of its bullpen with the eight-inning outing by Murphy. Not only was it the longest outing of Murphy’s career, but it was his third outing of seven or more innings this season. Both eight-inning outings by Knight and Murphy this weekend are currently the longest by any Razorback starter this year.

Murphy finished the game with 100 pitches thrown with 70 of them going for strikes. He retired 10 in a row to start the game before Southern Miss got its first baserunner via a walk in the fourth. Murphy didn’t even allow a hit until the fifth inning.

Up Next
Arkansas moves into the regional final with the win over Southern Miss and will await the winner of the Golden Eagles and Dallas Baptist from the loser’s bracket. Whichever team advances out of that bracket will have to beat Arkansas twice to reach the Super Regionals. A win tomorrow for the Hogs will place them in their seventh Super Regional in school history.

First pitch between Southern Miss and Dallas Baptist is set for 2 p.m. at Baum Stadium. The winner will face Arkansas at 7 p.m. later in the day.