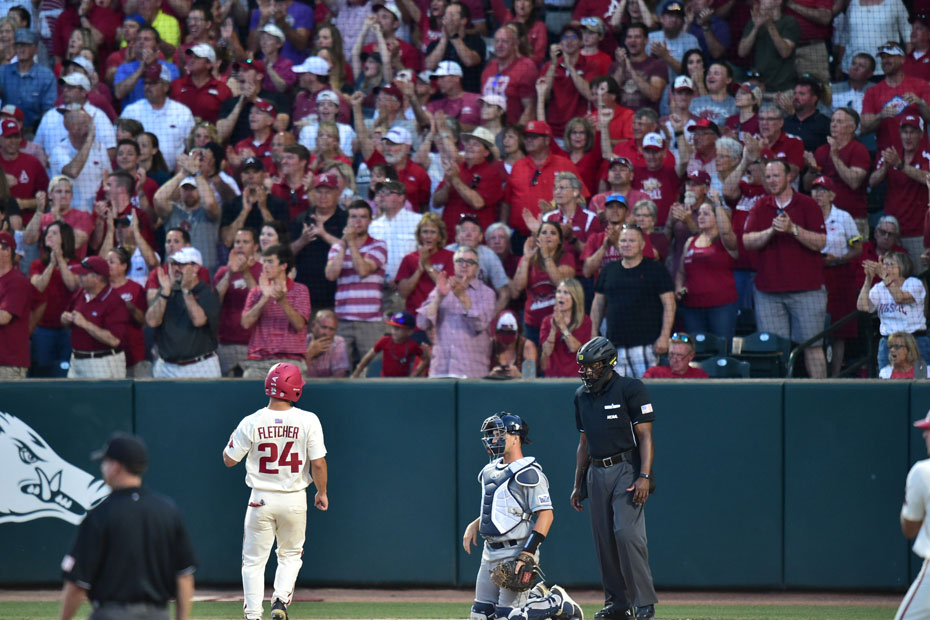 FAYETTEVILLE, Ark. – The fourth-ranked Arkansas baseball team is set for its seventh Super Regional appearance in program history this weekend, welcoming South Carolina to town with a College World Series appearance on the line at Baum Stadium.

The Hogs and Gamecocks will face off in a best-of-three series starting on Saturday with first pitch set for 5:30 p.m. on ESPN2. Game two will be at 2 p.m. on Sunday on ESPN. If necessary, game three will be on Monday at 6 p.m., also on ESPN.

Arkansas is fresh off a clean sweep of the Fayetteville Regional with wins over Oral Roberts (10-2), Southern Miss (10-2), and Dallas Baptist (4-3). The Razorbacks hit six home runs in the regional, four coming in the opener against Oral Roberts. Freshman Heston Kjerstad notched his second multi-home run game of the year when he went deep twice, giving him 13 for the year.

Pitchers Blaine Knight and Kacey Murphy both worked their longest outings of the year with each going eight innings and locking up victories. Knight remained undefeated at 11-0, the only pitcher in the nation with that record.

On the flip side, South Carolina comes in as the winner of the Greenville Regional, sweeping the field in their own right with wins over Ohio State (8-3), East Carolina (4-2), and UNCW (8-4). The Gamecocks are appearing in their 13th Super Regional after missing out on the tournament last season.

This will be the fifth time Arkansas and South Carolina have faced off this year, including a three-game series at Baum Stadium and one game in the SEC Tournament. The Gamecocks are the only SEC team to beat the Razorbacks at home this year, winning the series opener on April 12. Arkansas won both games of a double-header the next day, getting shutout performances from its pitching staff.

Saturday’s Probable Starter – RHP Blaine Knight
Junior right-hander Blaine Knight will get the ball for Arkansas’ opening game of the 2018 NCAA Super Regional, making his 17th start of the year. Knight has been the Hogs’ number one starter from the season opener and has solidified himself as one of the best hurlers in the nation. With an undefeated record and a 2.74 ERA, Knight is the only pitcher in the nation with 11 wins and no losses and his 230 career strikeouts are good for fifth-most all-time in Arkansas history.

Player to Watch – OF Heston Kjerstad
After having a quiet week at the SEC Tournament, freshman Heston Kjerstad broke out the bat again last week at the NCAA Fayetteville Regional, leading the Razorbacks with a .500 average (5-for-10), including two home runs and five RBIs. Both of his home runs came in the regional opener against Oral Roberts and gives him 13 for the year, which ties for the team lead with Eric Cole and Casey Martin. Both Kjerstad and Martin have tied the Arkansas freshman record for home runs in a season last set by Zack Cox in 2009.

RAZORBACK PRIME 9
>> Arkansas is playing in its seventh NCAA Super Regional in school history and hosting for the third time. Fayetteville last hosted Super Regionals in 2015 (vs. Missouri St.) and 2004 (vs. Florida St.).

>> The Razorbacks won a share of the SEC Western Division title this year by finishing with an 18-12 conference record. It’s Arkansas’ first division title since 2011 and fourth under Dave Van Horn.

>> The Razorbacks swept through the NCAA Fayetteville Regional last week and has won five of their last six games. Over that stretch, the Hogs are batting .289 and have a 3.06 team ERA.

>> Arkansas now has 90 home runs for the season, good for second in the SEC and just two less than the school record of 92 in a single season (2010).

>> Freshman duo Casey Martin and Heston Kjerstad both tie for the team lead with 13 home runs for the year. That total matches the Arkansas freshman record for home runs in a season (Zack Cox – 2009).

>> The Razorbacks gained control of the Fayetteville Regional last week by getting quality starts from Blaine Knight and Kacey Murphy. Both went eight innings, which were the longest outings by any Razorback starter this season.

>> Arkansas and South Carolina have faced off four times in the NCAA Tournament, but this weekend will mark the first such meeting not in the College World Series.

>> A Super Regional win this weekend over South Carolina will give Arkansas its ninth College World Series appearance in school history and fifth under head coach Dave Van Horn.