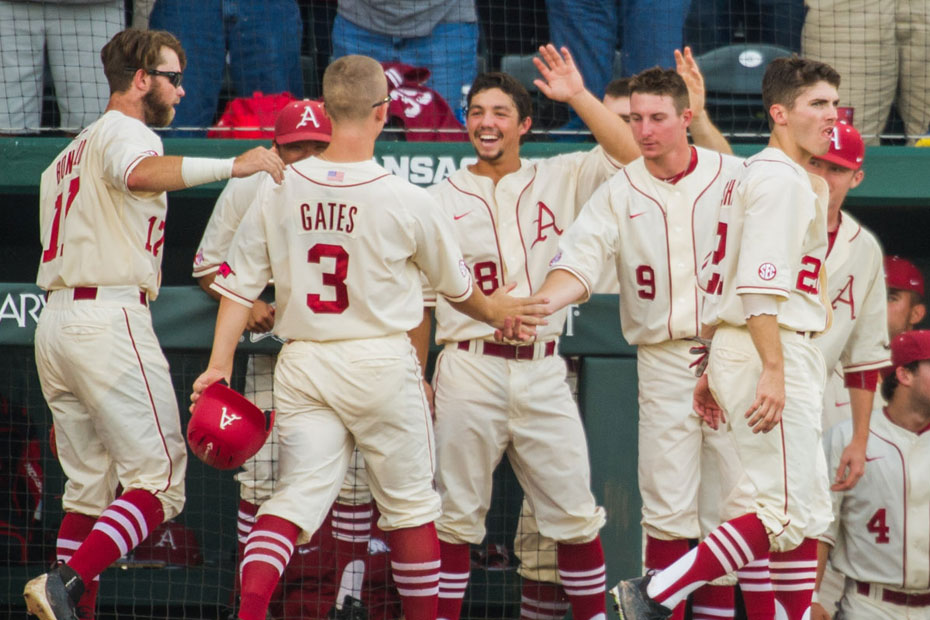 Coming off a 26-29 season in 2016 and missing the postseason for the first time in 15 years, the Hogs not only got back to the postseason, but posted 45 wins, its seventh 40-win season in the last 10 years, and hosted an NCAA Regional for the sixth time in its history, first since 2010.

The Razorbacks got one of its gutsiest performances of the year from sophomore pitcher Kacey Murphy, who was starting for the second time in three games and one day after pitching Arkansas past Oral Roberts in its first elimination game.

Murphy threw five innings and gave up only two runs on two hits with eight strikeouts on 81 pitches. It was the fourth time this season that he struck out eight or more batters and fourth time he went five or more innings. In his two regional starts, Murphy threw 8.2 innings combined and struck out 14 batters, the most of any pitcher in the regional.

Missouri State took the early lead in the fourth, getting a single run from Jake Burger, who led off the frame with a double. After a fly out advanced him to third, he later scored on a deep sacrifice fly from Alex Jefferson to left field. Murphy retired the next four batters to get through the fifth and was relieved in the sixth.

Arkansas was able to respond in the bottom of the fifth and tie the game at 1-1 when Jared Gates hit his second home run of the tournament and second, ultimately, of the day. Gates homered earlier in the morning as part of Arkansas’ big 11-10 victory over the Bears that forced the deciding final game.

Gates turned in a 2-for-4 night at the plate with the one RBI and two runs scored. Gates’ game was his fifth multi-hit game of the season and first since May 4 against Tennessee. The sophomore was one of only three players to homer more than once in the Fayetteville Regional.

The Bears scored two more runs in the sixth inning to take a 3-1 lead, but Arkansas, again, scratched its way back with a lone run in the seventh on the help of a one-out double by Gates and then two wild pitches from Jordan Knutson that led to the run.

Unfortunately, Knutson was able to settle down and retire the final seven batters he faced to help give Missouri State the win.

All five of Arkansas’ hits in the game came off the bats of Gates and sophomore Eric Cole. Cole turned in a 3-for-4 game, his fourth game of three hits or more this season. Cole had one of the hottest bats for the Razorbacks down the stretch, as he hit .372 combined in the SEC Tournament and NCAA Regionals with five multi-hit games, 10 RBIs, and five extra-base hits, including two home runs. He finishes the year at a .282 average, higher than his freshman season, and his runs scored (31), hits (58), doubles (12), home runs (5), and RBIs (25) all were an uptick from a year ago.

Razorback Quotables
“It was just a great tournament. When I look back, I think about the scores of this tournament. We played five games. We won 3‐0 in Game 1. Both teams had good pitchers going, and it was tight for a while. And then the next four games we played were all 1‐run games. I just think that shows the strength of the teams that were here. Is there an elite team here? Time will tell. We’ll see how Missouri State does. I think everybody was really good. As far as just solid 1‐4 seeds, there probably wasn’t a better regional in the country because some teams get over ranked or over seeded. I just think it was a great regional. I think with all of the problems with the weather and battling, I think the fans were incredible. I think our support staff and administration did the best job they could. They did a great job. The crowd last night, I didn’t really mention it, was unbelievable at 1, 2, 3 in the morning. I felt like there was 10,000 people in the stands. They were right on que with everything that was going on. It made you proud to be associated with Arkansas and be their coach.” – Head coach Dave Van Horn on his overall thoughts on the regional

“I’m just proud of the players. That’s what I told them in the outfield – just walk out here with your head held high because you weren’t projected to do a whole lot this year after having a bad year. We had guys who took it personal and went out and played last summer and got better. Fall ball was upbeat. The guys worked extremely hard. They went on a mission to make sure that didn’t happen again. My coaches did an incredible job. I couldn’t ask for more from those guys. I’m proud of the guys. I told them ‘Here we are. You got beat.’ We just played four 1‐run games in a row and won three of them.” – Head coach Dave Van Horn on his assessment of the season

“It’s a great group of guys. We were supposed to be at the field at 3 p.m. today, and everybody was in the locker room at 2:15 p.m. Everybody wants to be around each other. It’s going to be tough.” – Eric Cole on the team chemistry