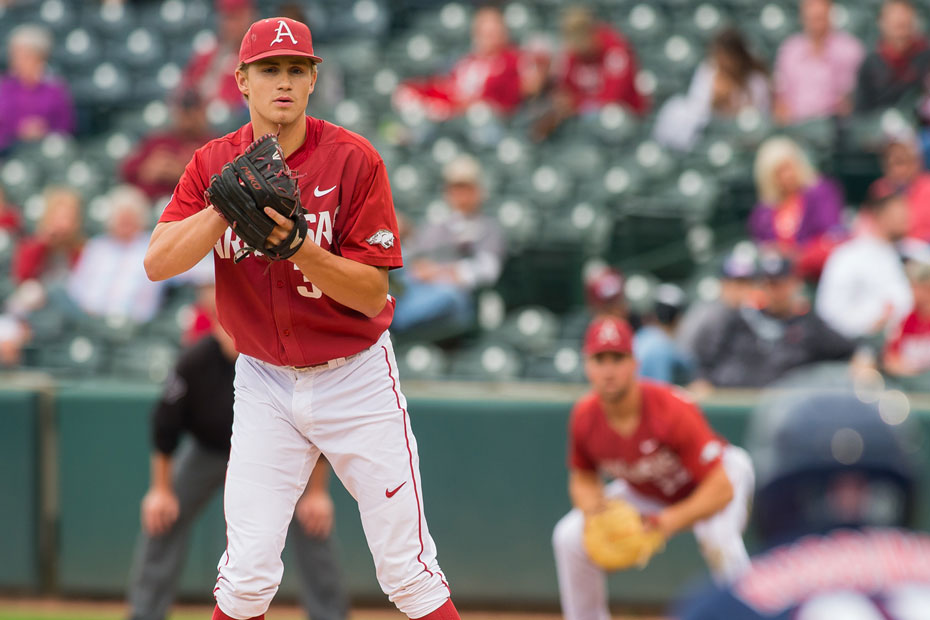 FAYETTEVILLE, Ark. – Utilizing a strong relief performance by sophomore Jake Reindl and some clutch hits late in the game from Jax Biggers and Eric Cole, 14th-ranked Arkansas was able to split its doubleheader with Ole Miss Friday afternoon with a 7-4 victory at Baum Stadium.

Reindl, who came into the game in relief of Kacey Murphy in the second inning, went a career-long 6.1 innings, allowing just one earned run and scattering six hits with five strikeouts.

Biggers and Cole recorded their only hits in the game as part of the three-run eighth, but they both game with two outs to help Arkansas take the lead and hold it for good.

Grant Koch came away with the best day at the plate among all Razorbacks, going 3-for-8 (.375) with two home runs, a double, and four RBIs. Carson Shaddy and Chad Spanberger also added two hits each in the victory. Spanberger hit his 10th home run of the year in the fifth inning to tie the game at the time at 3-3.

Arkansas struggled to get the bats going again Friday, recording only four hits on Ole Miss starter Ryan Rolison. The lone run came from a solo homer by catcher Grant Koch in the fifth inning, his only hit in the game. For Koch, it was his team-leading 10th home run of the year and first since April 8 against LSU.

Unfortunately, the Hogs were put in a hole early after starting pitcher Trevor Stephan labored through the first, giving up four runs on four hits. Ole Miss batted around before the Razorbacks were able to escape the inning with the big hit coming on a double down the left field line by Nick Fortes.

Even though he needed 40 pitches to get out of the first, it was the only inning the Rebels were able to muster any offense. Just three baserunners reached off Stephan for the next five innings, all singles. In the second, third, and fourth innings, the junior needed 10 pitches or less to retire the side.

Stephan finished with three earned runs allowed over six innings, striking out five and walking one. It’s his ninth outing this year with five or more strikeouts and a good bounce-back start after lasting just 1.1 innings last week at No. 10 Auburn.

Ole Miss again jumped out to a lead early in game two of the doubleheader, this time scoring three runs over the first two innings off starting pitcher Kacey Murphy. Murphy who had just two runs given up in his last 16.1 innings of work, struggled out of the gate when Ole Miss’ Tate Blackman led off the game with a solo home run.

Murphy finished the inning strong with a strikeout and a double play, but ran into more trouble in the second when the Rebels got another home run, this time from Thomas Dillard down the left field line to make it 2-0. Murphy walked the next batter and gave up a double before it was time to go to the bullpen.

With Reindl coming out of the bullpen in the second, the Razorback offense was able to respond with a two-run third inning from Koch’s second home run of the day. It was the first of three RBIs for the Fayetteville native in the game, as he had a double in the fifth inning that brought in the go-ahead run for the Hogs.

Koch’s clutch double came right after junior Chad Spanberger hit his 10th home run of the year into the right field bullpen to tie the game at 3-3. Spanberger finished the game 2-for-3 with two runs scored and he was one of three Razorbacks to record a multi-hit game in the tail end of the doubleheader.

Reindl was the key hurler that gave the Hogs a chance in the middle innings. Not only was his outing a career-long, but he kept Ole Miss off the board in the third and sixth innings after runners were put into scoring position, giving Arkansas a chance to take the lead.

Ole Miss was able to tie the game in the top of the seventh inning as it was the first run giving up by Reindl in the game, but the Razorbacks were able to put together a big inning in the bottom of the eighth to pull away.

Carson Shaddy led off the inning with a single, his second hit of the day. Then, Dominic Fletcher reached on an error to put runners on the corners with one out. Biggers followed with a two-out single to retake the lead before Cole provided the two-run insurance with a single to right field, giving Arkansas a 7-4 lead.

Freshman Evan Lee closed out the game in the ninth to earn his first collegiate save, needing just six pitches to get the final three outs.

Razorback Quotables
“This is the biggest game of the year that we have had so far, just because of the way it has gone. We really needed a win and we put (Evan) Lee in the lineup because he’s a winner. I’m pretty excited to be honest with you about Lee. He came in, he got three outs. He threw the ball over the plate and that’s what we want you to do when you have a three run lead in the ninth.” – Head coach Dave Van Horn on Evan Lee

“I just wanted to do my role. They told me ‘Hey, you’re coming in.’ I had to attack those hitters coming up, I had runners on first and second and, thankfully, I got a few breaks here and there and we got the job done.” – Evan Lee on closing out the game in the ninth to earn his first collegiate save

“I’ve been seeing the ball the same and just made some minor tweaks, minor adjustments and stuff like that. Never lost any confidence or anything like that. I’ve been seeing the ball well and trying to get those hits. It’s confidence for sure, but nothing has really changed for me. I’m just trying to put together good at-bats.” – Grant Koch on breaking out of his slump at the plate

Up Next
Arkansas will get a nice break before going back on the field for its next series. The Hogs will travel to Knoxville, Tennessee next weekend for a three-game series starting on Thursday at 6 p.m. The Razorbacks and Volunteers will play games two and three on Friday and Saturday, at 5 p.m. and Noon, respectively. Thursday’s and Saturday’s games will be televised on the SEC Network.